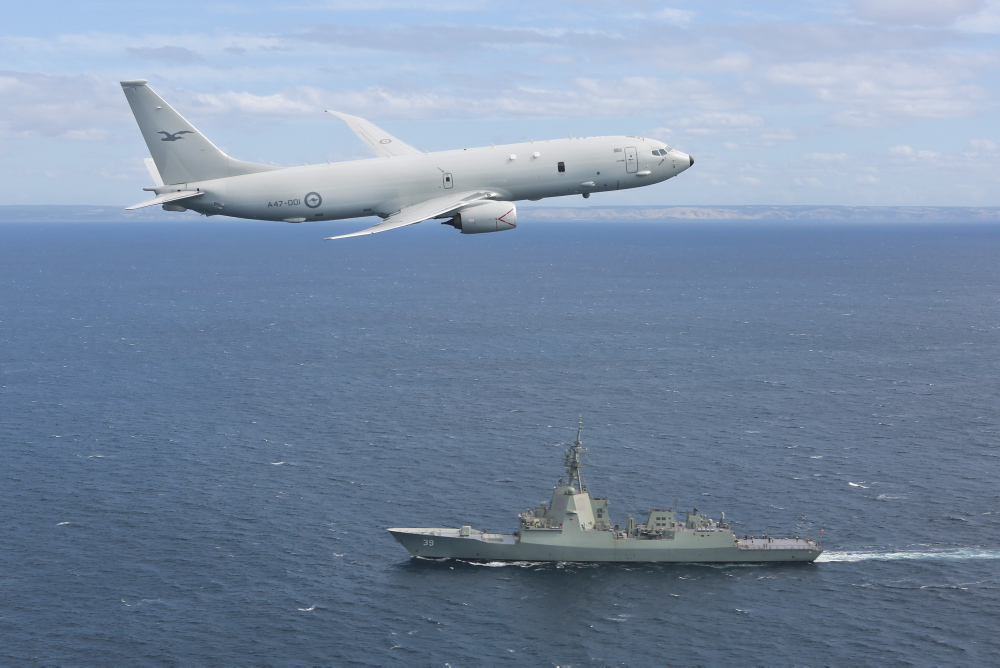 With the return of the key demand for theater ASW, meaning an ability to both find and kill enemy submarines, the Aussies are working their template for shaping a way ahead in this area.

With the rebuild of their Collins class submarines, and the addition of the Romeo helicopters and their new P-8s, they are shaping a template for their way ahead.

At the heart of this working relationship is how the RAAF and its land based air will support the Royal Navy in its operations.

It is as if the USAF and the US Navy were closely cross aligned on the same mission set in the ASW area.

This means as the F-35 comes into the inventory along with the Triton, the RAAF will be expanding the template being built around Collins-Romeo-P-8.

Next to be added will be the new Royal Australian Navy frigates and then the new class of submarines as the template is reshaped and the reach and range of Australian operations expanded.

During my visit to RAAF Edinburgh on August 10, 2018, I had a chance to get an update on the coming of the P-8 to the RAAF and to talk with Group Captain Darren Goldie, Officer Commanding 92 Wing.

92 Wing is described by the RAAF as follows:

Headquartered at RAAF Base Edinburgh, No 92 Wing (92WG) has long been established as the first Maritime Wing of the Air Force.

Operating AP-3C Orion and P-8A Poseidon aircraft, 92WG’s combat roles include anti-submarine and anti-surface surveillance and warfare for which the aircraft are equipped with torpedoes and Harpoon anti-ship missiles.

The AP-3C is being replaced by the P-8A Poseidon and MQ-4C Triton which will perform the vital functions of long-range maritime patrol.

Since that time, new buildings have been put up to support the P-8 operations as well as the main operating hangar and control center close to completion.

In that meeting, the process of change was highlighted.

We are P-3 operators but the operating concept of P-8  is very different and we are working the transition from the P-3 to the P-8 which is a networked asset both benefiting from other networks and contributing to them as well as a core operational capability and approach.

The changes that are coming are very exciting.

So we’re moving from an aircraft, which we’ve pretty much maximized, to a new one which is called P-8, for a reason.

And we’re going to a new world with a starting point, which allows us to grow.

The capacity to integrate, innovate, and talk to our allies and our own services is a quantum leap in what we’ve had in the past and it will allow us to be able to do our roles differently.

Shaping that change is one of the key missions that we’ve got.

We are going to innovate and think out of the box compared to P-3 tactics and concepts of operations.

The current visit provided an opportunity to discuss progress and thoughts about the way ahead with the current 92 Wing Officer Commanding.

Group Captain Goldie comes from the C-130 community and he argued that when a new series of aircraft are introduced into a community, in this case a P-8 in what has been a P-3 community, the addition education required (through conversion onto the new aircraft type) is significant whether you have been doing MPA missions or flying very different aircraft. He argued that with a change in the aircraft type, “it’s a great opportunity to move some people around the organization, to get a bit of cross-pollination in the force.”

There are currently seven P-8s at RAAF Edinburgh.

And with the current training cycle, the RAAF will train their P-8 operators in Australia.

“The last pilots to be trained in the U.S. have just arrived. We’re basically using the instructional workforce that has been embedded inside VP-30 for the last few years.

“They’re all posted to 292 Squadron, which is located in the adjacent building to us at the moment using the various training simulators and devices we have purchased and set up for crew training.”

After the interview, we walked around the maintenance training facility, which is very impressive.  The training area includes computer-based virtual training, which is capable of providing very detailed instruction and computer replication on the various aspects of the aircraft.

The virtual maintenance training is complemented by the use of key aircraft components – training devices — to get hands on experience.  This includes a 737 which has been modified to replicate a P-8A and painted in RAAF colors, on which crew can train for loading weapons, reconfiguring the aircraft or loading the search and rescue kit.

The Wing is in the process of crossing over from P-3s to P-8s.

“We’re right in that cross at the moment. We have roughly the same amount of crews flying each of the types, with four crews each on the Orion and Poseidon.

“But numbers five, six, seven, and eight are about to get going on the P-8, which means that we’re at the crossing point. So now it’s a case for every mission between now and the end of the year, we will work with the Air Operations Centre at Joint Operations Command to decide which aircraft type is better suited to the particular mission.”

Looking back at the process, Group Captain Goldie underscored that the planning has worked quite well.

“If you were to open the spreadsheet that someone drew up in 2012 or 2013 in terms of capability realization, we are on those timelines. So it’s a testament to buying an aircraft that another international partner, in this case the United States Navy, deployed a couple years ahead of us.

“But it would be remiss of me not to mention that of course there is challenges; it’s a new aircraft, it’s a spiral upgrade aircraft. That brings with it great opportunity in the future, but it brings challenges, as well.”

The Aussies are standing up their mobile operations center to use with the aircraft. They will receive three mobile tactical operations centers with one located at RAAF Edinburgh, with the other two ready to deploy forward to meet operational requirements.

“The Mobile Tactical Operations Centers will be operated from deployable shelters in the future, although at the moment, we are using tents.”

With both P-8 and now with Triton, Australia is in a co-operative program with the US Navy, which allows them to participate in co-development.

This essentially means Air Force is an equity partner in the aircraft, allowing influence and the sharing of resources for future upgrades.

“Through a co-development program we can participate in R and D for our aircraft through a partnership which leverages the size and technological capabilities of the US.

“For example, with regard to our search and rescue stores drops for the P-8, it was tested by the US Navy’s VX-1 squadron initially, before the conduct of OT&E within Australia.

“Our OT&E results were then fed back to the USN, with the procedures published in our shared document suite.

“Ultimately, the ballistics and checklists will be included in our training system as well.

“We have done the tests for Air to Air refuelling the P-8A with the (RAAF) KC-30A which is crucial for us but gives the US Navy a capability to leverage the global A330MRTT fleet as well.

“You can imagine the United States Navy would not place air-to-air refueling with the Australian KC-30 at the top of their list of priorities, but it’s close to the top of our list.

“Essentially, the US Navy gets a new capability by working with us.”

The P-8A uses jet propulsion jet and we discussed how using a jet versus a P-3 turboprop has changed maritime patrol.

“Firstly, an aircraft that can fly around at Mach 0.8, can get to an area of interest much more quickly.

“Given that it is designed to operate as a family of systems, the Triton will provide persistence, and the P-8 will become the response asset.

“If the Triton sees or senses something that is of value that needs closer investigation then of course the P-8 can respond, but I also see the P-8 as a strategic response asset.

“We are not easily going to be able to move the Triton around in the first few years; it will have a complicated basing structure, heavily reliant on its infrastructure for launch and recovery.

“In contrast, we can operate the P-8 on a variety of bases in the region. The P-8 can base in various locations through our partnership agreements within the region.

“An example of that might be operating with Seventh Fleet in Japan. So an endgame to me would involve taxiing our P-8 in on the ramp in Japan, downloading the aircraft media into the USN disk drives, which is thenprocessed, exploited, disseminated into the intelligence enterprise.”

“The traditional model of a P-3 or similar maritime patrol aircraft, includes transiting to an area, and using its sensors to find something. It then needs to localize the threat of interest. The process relies on that aircraft being a self-contained gatherer and disseminator of all of that. It needs to find it, it needs to collect it, it needs to decide what to do with it.

“Whereas with the P-8 plugged into a global satellite-enabled network meaning the information is readily available.”

The core point is that the template being shaped by the Triton/P8 dyad is laying a foundation for further innovation, innovation clearly visible in the weapons, sensor and remote platform areas.

The featured photo shows a RAAF P-8A Poseidon supporting sea trials for the NUSHIP Hobart in the Gulf St Vincent off the coast of Adelaide.

The photo is credited to the Australian Department of Defence.