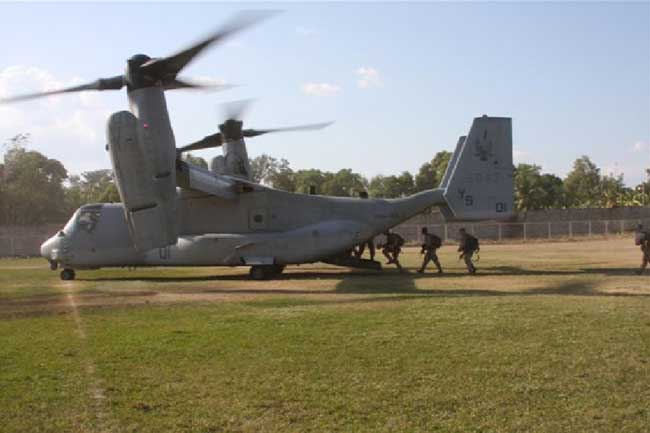 Late August 2010, Second Line of Defense met with pilots, and maintainers of the Osprey based at New River Air Station, North Carolina.

Captain Dwyer discusses how the USS Nassau and his Osprey operated in the Haitian relief mission. Captain Dwyer is a representative of the new generation of Marines who has only flown the V-22 and is enthusiastically exploring the capabilities of the new aircraft.

The MEU began its seven month deployment in Haiti and then when on to operate in the Gulf Aden.

The piece provides us with a sense of how a key new capability was adapted by operating Marines rapidly to the situations in which they find themselves. SLD: How was the Osprey used off of the USS Nassau in the Haiti crisis?

Captain Dwyer: The V-22 was used in a perfect conceptual way.

We ranged the entire island.

We went out to little villages that nobody had been to.

We went from the epicenter.

We covered the whole concentric rings from where the earthquake struck and we were the first ones on scene for a lot of these places that still hadn’t quite gotten the relief that they needed, the water, the food etc.

SLD: Emotionally, that must have been amazing.

Captain Dwyer: It was. It really was.

One of the coveted things for me was the Medivac.

We actually got to retrieve an 11-year-old girl who had a broken leg and it started to get infected and she was going to loose her leg.

We were able to prevent that. So that was, you know, very cool.

SLD: You picked her up, and did you go back to the Nassau?

Captain Dwyer: Indeed we took her back to the ship.

There was so much going on at the Port of Prince, the ship was not parked in the port.

Because we had the legs, we parked it about 75 miles away.

SLD: And a lot of distraction.

The physical presence of the ship was not an issue because we could go so far away. With that, we could range the entire island and still on an every other day basis, we could range Guantanamo Bay for just a general logistics run.

They had massive amounts of shipments going into Guantanamo Bay that it was taking ships approximately like three days to turn around.

SLD: So you were lifting Guantanamo to Haiti?

Captain Dwyer: We were lifting them from Guantanamo Bay to other ships.

Port-au Prince was so cluttered. They had so much food and relief effort supplies there, they couldn’t move aircraft around.

We would take supplies to different ships and then from our ship, we would take it directly to where they needed it.

And we would also take the Marines with us with translators etc. and we could go to survey basically every village that we thought had gotten some amount of damage.

SLD: So you were the first insertion doing situational awareness, and evaluation, because you could get around to different locations?

Captain Dwyer: Absolutely. There was a lot congestion in the airfield itself at Port-au Prince which prohibited us from really going in there. We only operated around it.

We didn’t actually go in to Port-au Prince.

We also functioned as an overflow for the hospital ship, Comfort.

SLD: That’s not a huge ship.

Captain Dwyer: Right. So we became kind of holding area for some immediate treatment. so there were a lot of flights, ferrying back and forth between the Comfort and the Nassau and later the Bataan; after that ,they decided they didn’t need us anymore when the roads were starting to clear up.

We were there about 14 days.