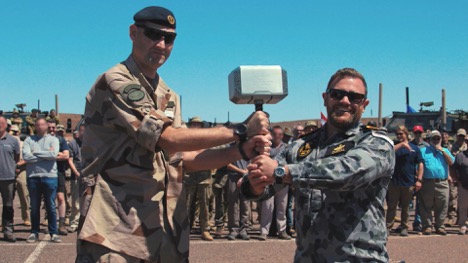 The systems can prevent the detonation of remote-controlled IEDs and also defeat small unmanned aerial systems, or “drones”, that can be used to drop explosive devices or conduct surveillance.

“The findings and collaboration during this activity will potentially save the lives of military personnel from Australia and other countries when they’re on operations.”

The largest number of participating nations are attending this year’s exercise, with more than 100 military personnel and scientific researchers involved from countries including Australia, the United States, Canada, Germany, Austria, Luxembourg, Belgium, the Netherlands, Sweden, Denmark, the United Kingdom and France.

Researchers from Defence Science and Technology are supporting the exercise – the first time it has been held in Australia. The previous two exercises were held in northern Europe.

The 12 nations are working together to ensure their various force protection systems can operate effectively together when employed within the same operational area.

“By working together here with other nations we can share our knowledge and develop solutions much more quickly and efficiently than if each country was working by itself.”