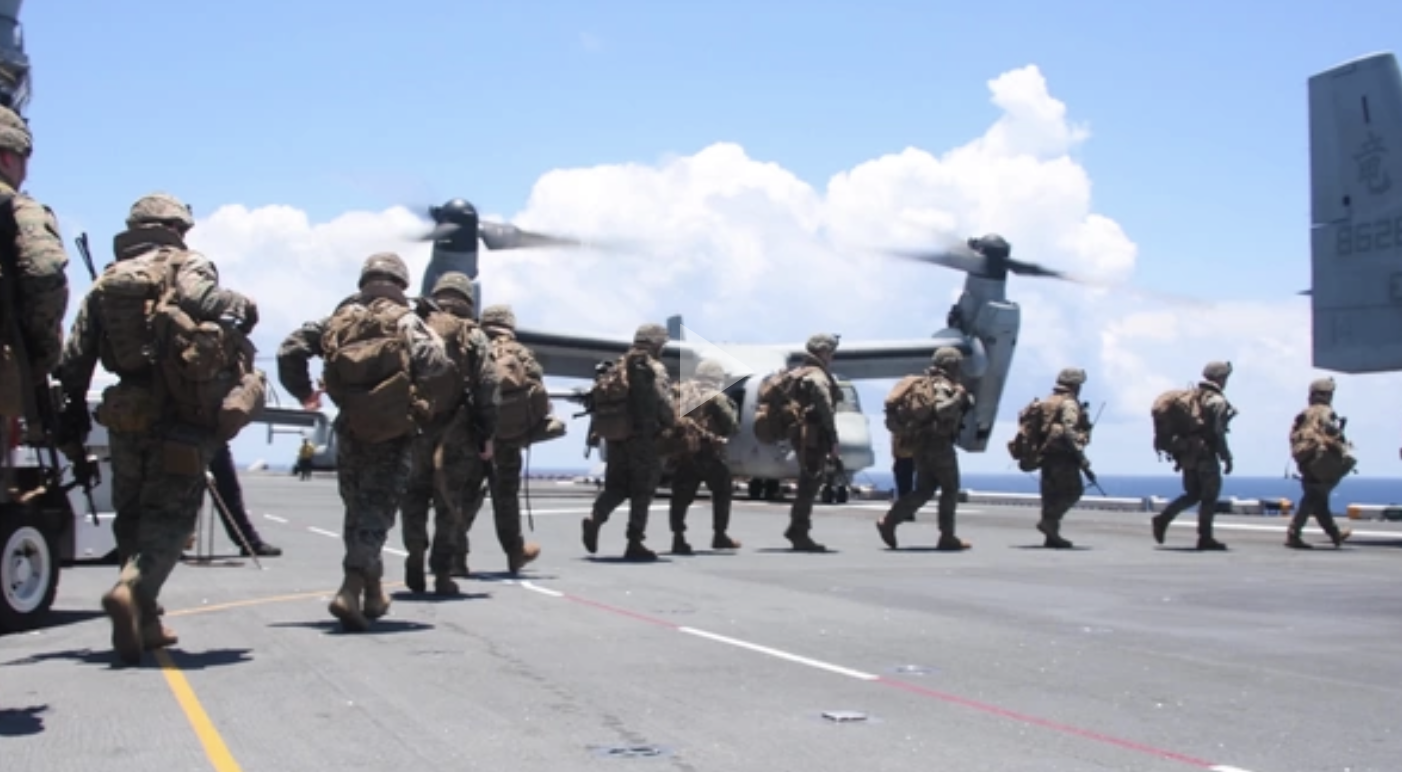 The Osprey has been and continues to be a major driver of disruptive change for the USMC and with it how to operate from the sea.

The speed and range of the Osprey broke the chains of the classic ARG-MEU construct and drove the USMC-USN team towards reshaping the approach to work amphibious task forces.

With the coming of the F-35 and a new class of large-deck amphibious ships this dynamic of change would accelerate as well and usher in a second phase of USMC transformation, started with the introduction of the Osprey in 2007.

Lt. Col. Boniface provided a visionary projection of how the Osprey would impact USMC operations and the amphibious force.

He became  Col. Boniface and recently retired from the USMC. His last job was at Headquarters USMC.

“The MV-22 and its capabilities are changing how we should be doing business. Traditionally, our MEU concept focuses on a radius of about 100 NM. With the speed and range of the Osprey, why can’t we change this radius to 500, 1,000, or even 1500 miles? We should be able to support a concept like this and we need to think in these terms.

“It is like a game of chess. I think of a traditional or legacy ARG-MEU as being able to move a pawn one space at a time towards the enemy. If you have ever played chess it sometimes takes a while to engage your opponent. We now have the ability to move a knight, bishop, or rook off of this same chess board and attack 180 degrees towards the rear of our enemy. We can go directly after the king. Yes, it’s not really fair, but I like that fact. The speed, range, and don’t forget the reliability of the MV-22, allows me to do this.

“We talk about staying ahead of the bow wave. Well there is a tsunami of change coming when we talk about the ability to fight an enemy and to support Marines ashore. We can increase our area of operations (AOR) exponentially because we can spread out our ships; now we have an aviation connector that can move Marines a tremendous amount of distance and in a very short amount of time.

“We can also use this capability to leverage our other aviation assets like our AV8-Bs, CH-53’s, AH-1Ws and UH-1Ys to support the MAGTF and ultimately damage the enemy’s will to fight. Let’s not just move 50-100 miles ashore, but let’s move 200-500 miles ashore, and do it at an increased speed, range and lethality.

“There are still a lot of naysayers who will cast doubt on this. How are you supporting those Marines ashore? How will the fire support piece work? Harriers and the F-35 concept along with a CSG can easily answer the fire support question for limited time until organic assets like artillery catches up. I think we need to challenge the autonomy of the CSG in regards to how it fits into a modern ESG concept.

“Innovative thinking with our Ospreys will enable proper support of the MAGTF ashore—the capability does exist. Logistics are always going to be a factor especially as we expand the AOR and bring into service more technologically capable aviation platforms.

“With that being said, the T-AKE has some real capabilities. This ship needs to be looked as more than a MAGTF logistic ship. It can function as an enhanced Marine Aviation I-Level (NavyAIMD) intermediate maintenance department afloat for an ESG with MAG level and Regimental level supportability.

“From an aviation standpoint the ability to repair, reissue, and supply major components and end items will be essential to the success or failure of the ESG. In regard to the MV-22, I would like to see this capability expand to where I can repair/overhaul an engine, possibly look at a prop-rotor gear box, or conversion actuator repair capability, and have the necessary technicians on board to support sustained operations in a littoral region—without having to reach back to CONUS for almost everything.

Lt. Col. Boniface then added: “With legacy aviation assets we have had to think inside the ARG-MEU 100NM operational box. We have to get out of this mindset. And we are starting to do so by operating a more disaggregate ARG-MEU and relying on the MV-22 as an aviation connector.

“Now we can move from a few hundred miles away in our operational sphere to more than a 1,000-1500 in our area of influence (AOI). We need to adjust our operational mindset to align with this new capability, especially with the coming of the F-35B.”

Boniface highlighted the actual impact as he had already seen it on the ARG-MEU and as he saw it with the expanded range of operation breaking apart the legacy ARG-MEU construct. He also anticipated the coming of the F-35 to the amphibious fleet which would further change how that fleet could operate and with what combat effects it could deliver.

The journey has been about the Marines moving from a significant focus on the land wars to a “return to the sea.”

It is one in which the force would change from a primary role of providing a greyhound bus to insert force to an engagement force able to operate from sea.

It has involved shaping and understanding what an air-mobile force could do when able to operate at greater reach into littoral regions with a rapid insertion force.

Empowered by the Ospreys coupled with fifth generation capability, the ARG-MEU has become a powerful integrated seabase able to operate over a much wider area of operations, and to provide for capabilities for sea control and sea denial.

Under the twin influence of these two assets, the new LHA Class the USS America was introduced and with it, significantly different capabilities for the amphibious force itself.

I will next look at the twin impacts of the coming of the F-35B to the insertion force and a new large deck amphibious ship, the USS America class.

This phase of transformation lays the foundation for shaping capabilities to leverage the amphibious fleet and to lay the foundations for shaping a way ahead for the joint expeditionary force, and the emergence of key logistical connector, the coming of the CH-53K.

And this phase of transformation provides a foundation for leveraging a new class of ships the Expeditionary Sea Bases.

“There is a Tsunami of change coming.”: The Osprey in Bold Alligator 2012 from SldInfo.com on Vimeo.

The transition by the U.S. Navy-USMC team associated with the amphibious task force is a key part of USMC transformation which is the focus of our next book to be published soon and a key part of the evolution of the kill web enabled U.S. Navy transition as well which is the subject of our new book on maritime kill webs to be published later this year.