There is a memorable scene in Ghost Busters where Bill Murray tells Sigourney Weaver in explaining his actions: “What version of the truth do you want?”

My own personal experience entailed walking by accident into the movie set for Ghostbusters when it was being filmed at Columbia University.

And I received a harsh rebuke from the film crew as a result!

Now that Murray experience resonates quite nicely with my own Wikipedia reporting on my life and career.

It is amazing how Wikipedia and the internet can manipulate one’s biography.

I have attempted according to Wikipedia’s own procedures to correct the record at least five times over the last past two years, including providing links to independent accurate biographical information. But this was to absolutely no avail.

I am according to Wikipedia a product of Curtin University in Western Australia.

Now my uncle did spend most of his working life in Australia and one of his sons, who was born in Australia, served in the Royal Australian Air Force, and two of my paternal grandmother’s brothers emigrated from Devon to Australia in the 1890s.

But l am afraid to say that l have never been to Australia, much less to Bentley, Perth, Western Australia, where Curtin University is located. Though l did in the mid-1960s consider for a short time going to the Australian National University in Canberra for post graduate work before l went to Spain, Portugal, the United States, and Brazil. Curtin University also according to Wikipedia has me listed as among the “people who attended” Curtin University. Which is not true.

I would not wish at all to disclaim this distinction. John Curtin (1885-1945) is ranked as one of Australia’s greatest Prime Minister’s serving between 1941 until 1945. A member of the Australian Labour Party he placed Australian armed  forces in WW2 under the command of US general Douglas MacArthur (1880-1964). Curiously I knew Jean MacArthur (1889-2000) in New York City in the late 1970s and early 1980s as she was a good friend of Martha Muse (1926-2014) the founder and president of The Tinker Foundation where l was the program director at the time. University status was conferred on Curtin in 1986 and three other institutions were incorporated including the Kalgoorlie School of Mines which opened in 1902. Curtin now has campuses in Malaysia, Singapore, Mauritius, and Dubai.

My Wikipedia entry was also severely cut back on April 24, 2022, removing the detailed description that had existed there about my dispute with “Foreign Affairs” over a review l wrote (at the behest of the editor) on Peter Kornbluh’s “The Pinochet File” which detailed Henry Kissinger’s actions before, during, and after, the military coup against Salvador Allende in Chile which resulted in Allende’s death on September 11, 1973.

My supposed link to Curtin University, the wrong date for my birth, and the wrong notice of my affiliation with Harvard University, all remain in the Wikipedia entry, and are all mistaken.

I was in fact born on February 3, 1941 and not on March 3 1941. I was educated not at Curtin University but at St John’s College, Cambridge University, and then at Princeton University. At St. John’s College l was a student of Ronald “Robbie” Robinson (1920-1999) who had served in the Royal Air Force in Africa during WW2 and at the colonial office thereafter. He was the co-author of “Africa and the Victorians: The Official MInd of Imperialism”, and of Harry Hinsley (1918-1998) who had been a key cryptanalyst at Bletchley Park, the Government Code and Cypher School School (GC&CS) during WW2 (though we did not know this at the time), and of the mediaeval historian, Edward Miller (1915-2000) who was the son of a shepard and came from Morpeth in Northumberland where my mother’s family also came from and still lived. All were proud grammar school boys which was unusual at Cambridge at the time, and two had real life experience outside the usual academic career track during WW2

And then at Princeton University l worked under the supervision of Stanley Stein (1920-2019) the distinguished Latin American scholar and the author with his wife Barbara Stein (1916-2005) of “The Colonial Roots of Latin America.” Stanley came from New York City the son of Jewish European immigrants. He served in the US Navy during WW2. He was educated at City College and then at Harvard. Barbara came from a very old New England and they met in Brazil where Barbara was working for one of  Nelson Rockefeller’s cultural initiatives. Stanley was working on the history of the enslaved populations of the great coffee estates of the Paraíba valley. While l was at Princeton Barbara was the Latin American bibliographer at the university’s Firestone Library. They were both marvellous mentors.

It was after teaching at Columbia University that l was appointed as the senior fellow for Latin America at the Council on Foreign Relations between 1989 and 2004. I was not at the Council for “six year’s” as Wikipedia has it. 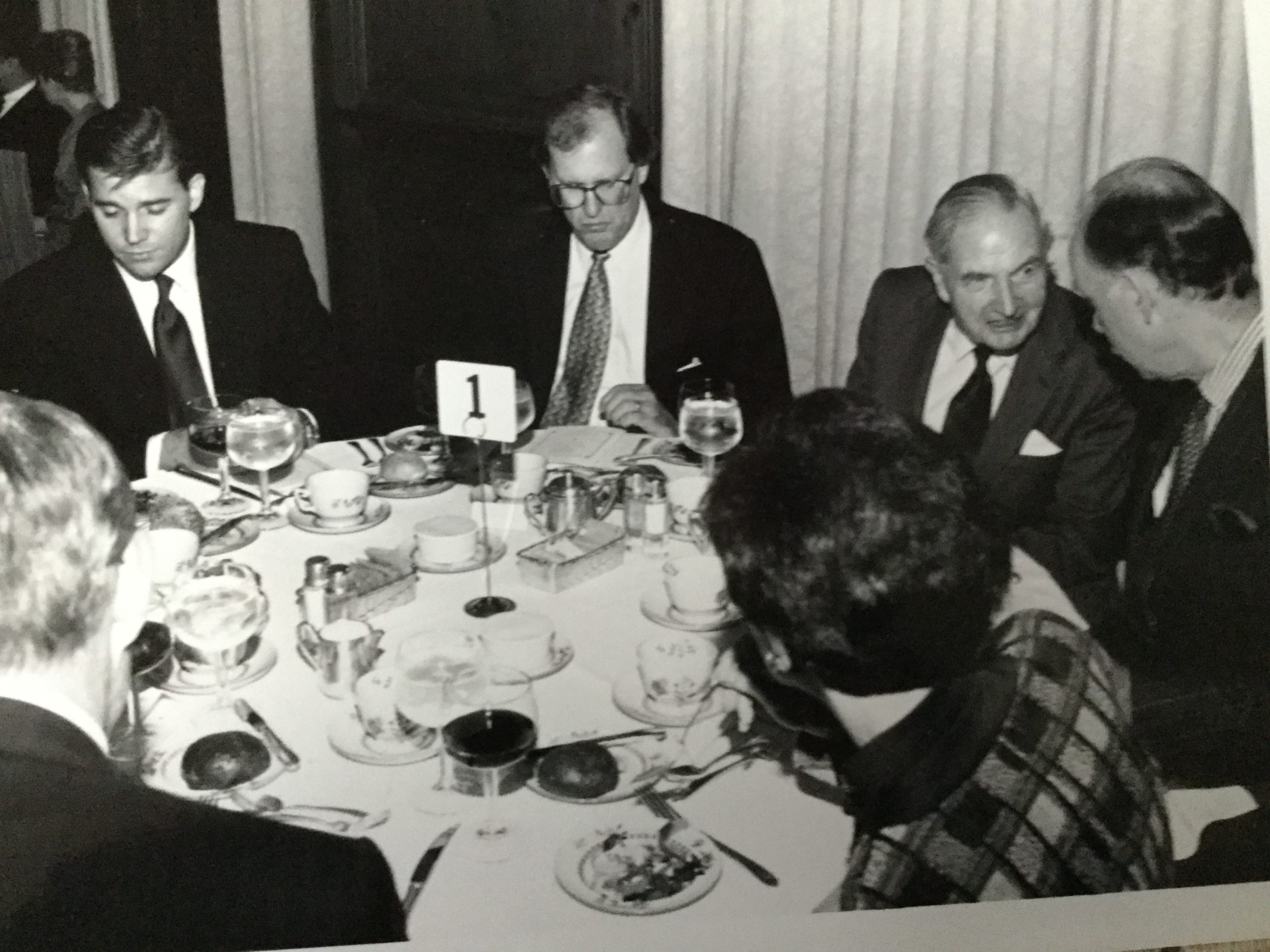 Nelson Rockefeller Junior, Alexander Watson, assistant Secretary of State for Inter-American Affairs,, David Rockefeller, Kenneth Maxwell, and Rita Hauser, at the inauguration of the Nelson and David Rockefeller Chair at the Council on Foreign Relations in New York City in 1995.We also invited Walther Moreira Salles (1912-2001), The Brazilian banker, politician and philanthropist, who was a old friend of the Rockefeller’s, to speak at my inauguration as the first Nelson and David Rockefeller a Senior Fellow in 1995. I served as the vice-president and director of studies of the Council in 1996 for a special limited term at my insistence when it was necessary to carry out major reforms during the presidency of Les Gelb (1937-2019), a truly great and original man in my view who l volunteered to help at a difficult moment.

I greatly enjoyed my years at the Council. l had very productive and happy times there and l was very reluctant to resign. But l did so as a matter of principle in 2004 over “Foreign Affairs” denial of my right of reply to an ad hominem attack on me in its pages by William D. Rogers (1927-2007), the Vice-President of Kissinger Associates, and one of Kissinger’s closest associates, for my review of the Kornbluh book.

Later at the time of Rogers death of a heart attack while riding  on his horse “Isaiah” with the fox hounds of the Orange County Hunt in Virginia, Kissinger called Bill Rogers “my friend and in many ways, my conscience (..) Rarely did a day pass, and never a week, without a long conversation (..) He would probably have considered the manner of his passing, while on a hunt, the most appropriate way to part from us.” It should be noted that l also knew Bill Rogers well. He was a long time lawyer at Arnold & Porter in Washington, D.C,  had worked with Kissinger in government, was an expert on Latin America, had represented Brazil, and conducted secret negotiations with the Cubans.

And at Harvard l was not “visiting doctor of history at Harvard University” as Wikipedia notes. I was appointed as a senior fellow at the David Rockefeller center for Latin America Studies courtesy of the historian John Coatsworth who was then the director of David Rockefeller Center and was later from 2012 to 2019 the Provost of Columbia University.

At Harvard l founded the Brazil studies program at The Rockefeller Center and raised a US$ 25 million grant from Harvard graduate Jorge Paulo Lemann for Brazilian studies at the University.

There are a great many very wealthy Brazilians. 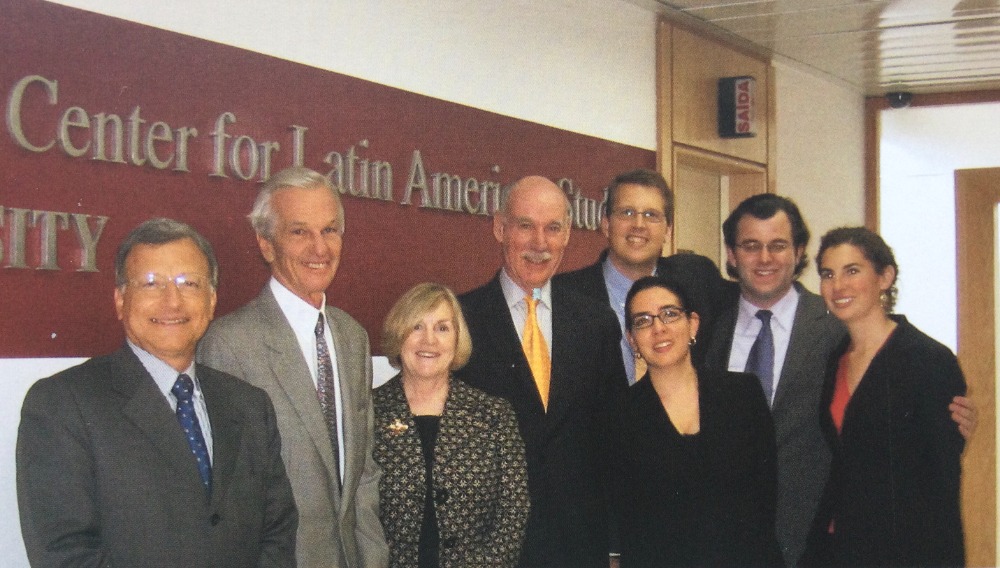 I taught as a Professor in the history department at Harvard where l thoroughly enjoyed the experience and had absolutely excellent students. Many have gone on to wonderful careers, including returning to Harvard as a professor of Romance languages and literature, and to Brown university as the Vasco da Game professor.

But then the Wikipedia’s algorithm is evidently to blame. So remembering Flip Wilson who said “the devil made me do it!” Perhaps now it is more accurate to say the algorithm is to blame!