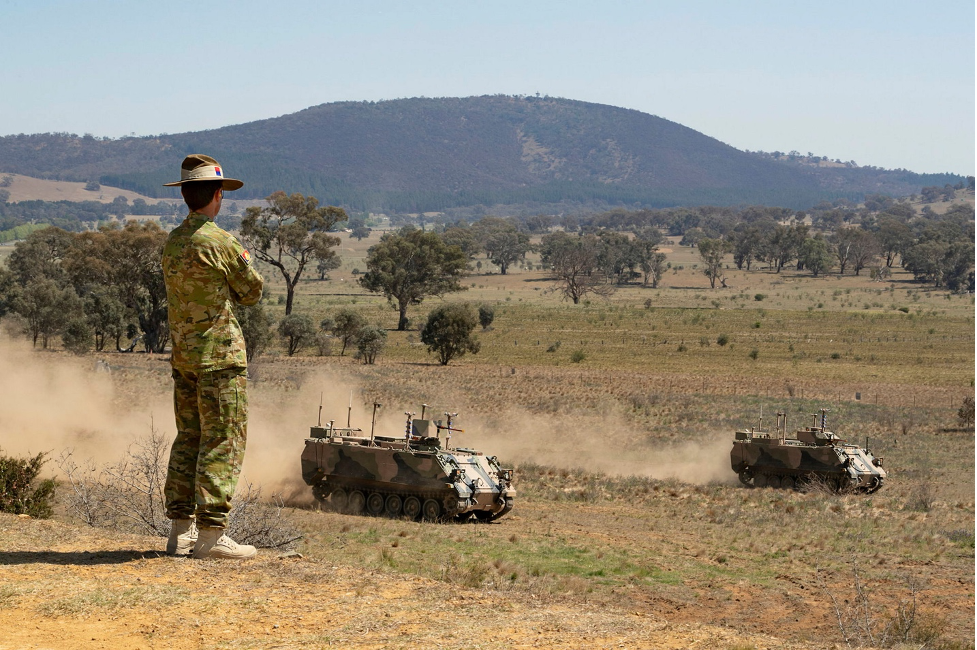 The destruction of hundreds of Russian tanks in Ukraine does not signal the end of the need for armoured vehicles in future warfare, says one of the Australian Army’s key capability specialists.

Brigadier Ian Langford, the army’s acting head of land capability, used a speech at the Australian Defence Magazine conference this week to set out the case for the purchase of up to 450 infantry fighting vehicles (IFVs) to replace the army’s 60-year-old M113 armoured personnel carriers.

The war in Ukraine demonstrated the need for the army to be able to fight and survive in intense, high-threat combat, Langford said.

Langford noted that while the army had to prepare for such contingencies, its wide range of duties included responding at home to pandemics and disasters such as fires and floods flowing from climate change—’a demand we can expect to increase over time, especially within our region.’

On the human cost of the conflict, Langford referred to a report on The Strategist that one-third of Ukraine’s population has been internally or externally displaced, that the war has resulted in thousands upon thousands of dead and wounded soldiers and civilians, and that this year alone, Ukraine’s GDP is expected to collapse by 45%. ‘These numbers should belong to history,’ Langford said. ‘Regrettably, they do not.’

He quoted Alex Vershinin of the Royal United Services Institute arguing that the Ukraine war proved that the age of industrial level warfare is still here and the West’s recent legacy of low-intensity conflict has distorted the notion that wars can be won through a single technology or domain.

Langford said the war was providing unique insights into the nature and character of war and Australia’s army was studying this conflict very closely. ‘Of particular note, the army’s future investments in capabilities to include operational-level, long-range offensive fires, a resilient digital battle management system, a world-class aviation system and a credible close combat system are being informed by these real-world events.’

He said the IFV was at the core of the Australian Defence Force’s ability to deploy and sustain a land force as part of a joint, integrated team. A decision on the IFV project is due to be made by the government this year. This important decision would bear on the ADF’s ability to generate a credible land combat system, Langford said.

‘It will determine to a certain degree how government chooses to project military power, operate in high-threat environments, prepare for all ranges of contingencies, achieve deterrence, balance its force structures and prepare for the type of future conflicts envisioned like those currently being witnessed in Ukraine,’ he said.

‘Just this week, British PM Boris Johnston predicted that this conflict will likely lengthen in duration and increase in intensity over the coming months. Russia’s forced adjustments to its war aims, originally designed around a short, rapid seizure of the Ukrainian capital followed by the rapid defeat of its military, now instead plan on a long, bloody conflict. The ensuing rate of high civilian casualties and significant destruction to Ukraine’s infrastructure are ultimately intended to exhaust Ukraine into a negotiated settlement which might include Russia’s reclamation of Ukrainian territory, allowing the pyrrhic victory that it now seeks in order to justify its “special military operation”.’

Langford said the IFV appealed to the promise of unprecedented firepower, protection and mobility for the army and could be employed alongside a combination of tanks, infantry, and a range of other joint capabilities and emerging technologies.

‘This capability nonetheless is the core of the close combat team as it relates to the task of closing with and killing or capturing enemy forces, and its existence in part acknowledges the myriad of threats that now exist on the battlefield, including the presence of improvised explosive devices like those experienced in Afghanistan through to the prevalence of loitering munitions which, according to some, may pose an entirely new lethal threat to soldiers who lack the levels of protection, manoeuvre and firepower necessary to survive in modern warfare.

‘Many either see this role as confronting, distasteful or no longer relevant to war with the advent of modern technology. And yet, what we see in theatres such as Ukraine suggests otherwise. The army must be able to fulfil this role given that there is no viable alternative in the short to medium term.’

Langford asked rhetorically if the conflicts in Ukraine and earlier between Azerbaijan and Armenia meant modern armoured vehicles were at such risk of defeat by a lightly armed foe with drones and modern guided weapons that they should be abandoned.

‘The short answer is no,’ he said.

‘Drones and anti-armour systems are contributing to this war, but so are the infantry, armour and artillery as well as the naval, air, space and informational power of both sides. Equally, it is hardly surprising that late-model drones and the best anti-armour weapons that the Western world manufactures, designed with sophisticated target-acquisition sensors, guidance systems and advanced warheads, are defeating tanks and IFV developed four decades ago, if not earlier.’

Langford said the majority of Russian vehicles in Ukraine lacked equipment that enabled modern armour to survive such as soft- and hard-kill active protection systems (APSs) and the benefits of integrated command, control and communications systems, which were vital for mobile forces to operate under an effective air-defence umbrella.

‘There has not been a single APS-active armoured vehicle destroyed in Ukraine,’ Langford said.

Russian tactics there were conceived around numbers with less regard to survival, he said. ‘Additionally, Russian vehicles are so obviously poorly sustained, maintained and operated it is little wonder that they are presenting so many targets to Ukrainian forces who are being well equipped by the collective capacity of NATO and others to destroy these antiquated Soviet-era capabilities.’

Russian military performance has been spectacularly poor in Ukraine. At the tactical level, Russian units have showed an inability to follow basic military procedures. They have failed to prove routes, have advanced in densely packed groups of vehicles, have tended to lose momentum when engaged, and been road bound, neither screening their flanks with patrols nor setting up their air defences. The force has shown a very limited capacity to operate in combined arms groupings.

‘The ADF’s land force is not the Russian Army,’ Langford said. ‘It operates in a different way which leverages strengths, and offsets weaknesses.’

Looking at the 2020 Armenian conflict, the Center for Strategic and International Studiesidentified that armour and other heavy ground units would remain vulnerable to drones until mobile short-range air-defence systems improved and proliferated. But it warned that while drones played a large role, their capabilities ought to not be exaggerated and they were highly vulnerable to air defences designed to counter them.

They were not necessarily the ‘wonder weapons’ they appeared to be at first glance, Langford said.

‘As a first-world nation, the acquisition of both tanks and IFVs reflects on a nation that understands that it must conduct these inherently dangerous roles but that it also places high value on protecting the lives of the soldiers that it asks so much from in high-threat environments.’