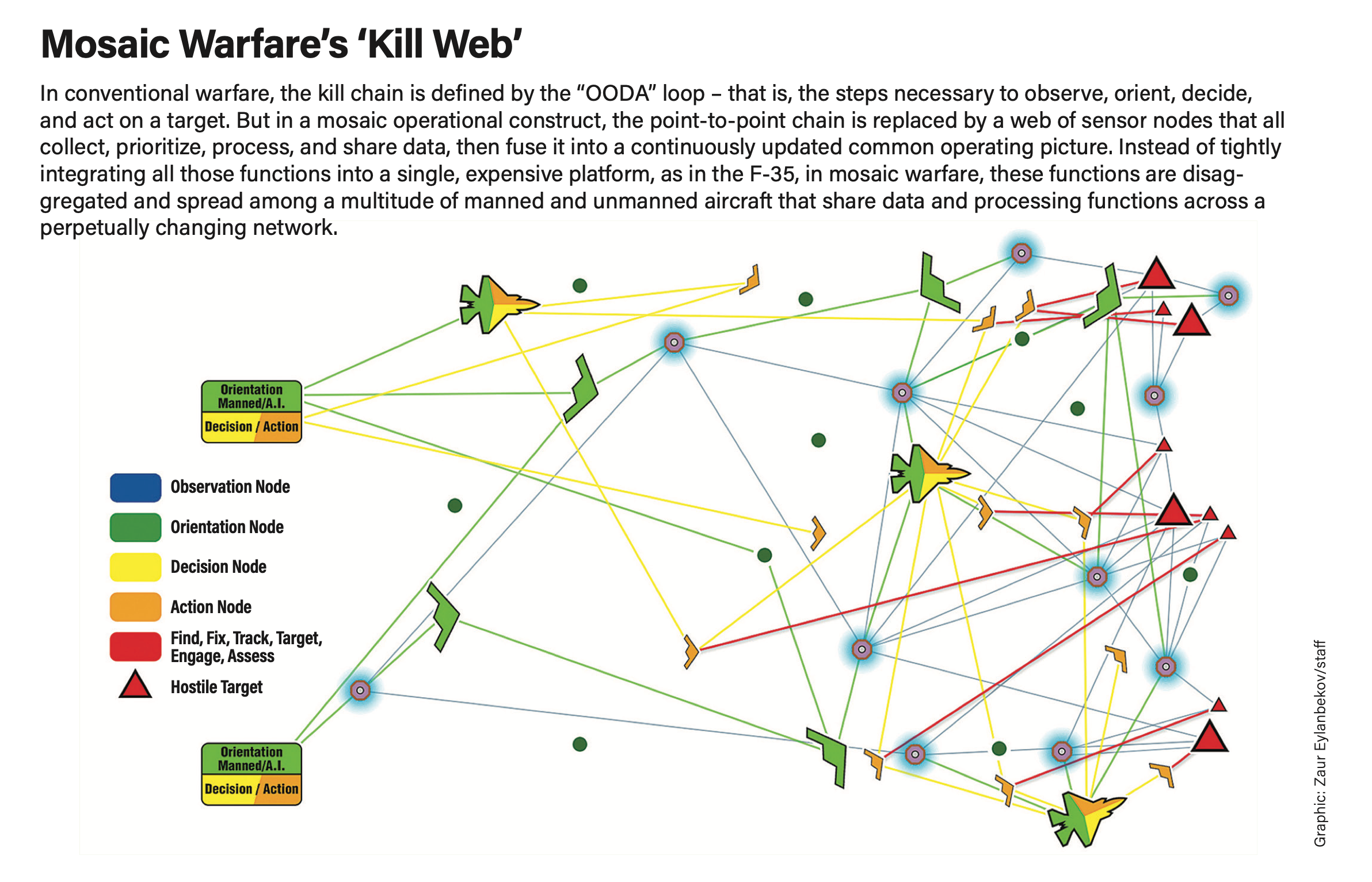 With the U.S. Navy highlighting a distributed maritime operations approach along with the USAF highlighting its Agile Combat Employment (ACE) approach, a key question is how these will dovetail and shape an effective kill web capability in the Indo-Pacific and European regions?

The ability to operate, sustain, defend, and project power will be re-shaped as new connectors, different ways of using aviation assets, the addition of a core capability like directed energy weapons is added to the fleet, and the potential for the USAF to leverage supportability and expanded reach from leveraging seabasing as part of agile combat employment could drive both force redesign and con-ops innovation for force distribution and integration.

At the heart of both the challenge and the opportunity is the question of how to provide distributed logistical support and how to do so effectively?

How to deliver the right weapons to the right place at the right time to deal with air and sea forces when they are going Winchester with regard to weapons?

How to complement the core fuel resupply which for the Navy revolves around the various ways the Military Sealift Command can provide fuel or how larger capital ships can transfer fuel to other ships in the fleet?

For the USAF, in addition to protecting fuel loading facilities in fixed bases and to providing for fixed wing air refueling, how might the Navy deliver fuel to a distributed air component in a mobile base location?

We have addressed the question of the U.S. and allied navies working distributed maritime operations in our new book entitled A Maritime Kill Web Force in the Making: Warfighting and Deterrence in the XXIst Century.

A key element for shaping such a force, able to operate throughout a chessboard on the geo-political space, highlights the need to join the flexibility of seabasing with various other forms of flexible basing which can enable the joint and coalition force.

Distributed maritime operations or DMO is part of a larger effort, one in which the joint forces are working force mobility and basing flexibility to intersect with DMO to deliver a much more lethal, and survivable force. It is also one that is agile and can operate at the point of impact within a crisis environment.

We quoted Rear Admiral Meier, commander of the Naval Air Force Atlantic, with regard to the importance of working the logistics piece for distributed maritime operations. challenge.

“And that is exactly what the professionals that analyze distributed maritime operations are looking at; it is those strengths of the carrier strike group that we touched on earlier of maneuver. The fact that our carrier strike groups can move 700-plus miles in a 24-hour period, the increasing range and lethality of our ever-advancing air wing and the weapons that challenge.

“And that is exactly what the professionals that analyze distributed maritime operations are looking at; it is those strengths of the carrier strike group that we touched on earlier of maneuver.

“The fact that our carrier strike groups can move 700-plus miles in a 24-hour period, the increasing range and lethality of our ever-advancing air wing and the weapons that those aircraft carry can hold huge areas of the surface at risk. Over the course of a three-day period, it would mean just a staggering volume of a real estate, roughly the entire Pacific AOR over a 72-hour period. But it is that logistics support train that is really a key part that makes that happen.”

Indeed, the logistics lynchpin is crucial both for DMO and agile combat employment considered separately, but working synergy provides ways for both the Air Force and the Navy to augment significantly ways to enable the integrated force to operate in distributed locations.

This piece is the first in a series of articles addressing this key challenge and opportunity.

The featured graphic shows a view of how the USAF would operate in terms of a kill web concept of operations.

But where are these airplanes coming from?

Where are they based?

How will they operate in a distributed environment?

How will they re-arm?

How will they refill given the significant shortfall in fixed air wing refueling systems?

And notably, there is no concept of how the U.S. or allied Navies can provide the data and decision-making nodes to this “mosaic warfare” operating force, nor how the fleet can sustain the Air Force logistically,

This graphic is the beginning of an exploration, but just that.