The US administration is changing its attitude towards Egypt as a defence partner and this is forcing Cairo to seek weapons from other sources.

In the US there are voices calling for a re-assessment of the foreign military financing (FMF) provided to Egypt. This is based on the benefit to the US from the FMF grants and the type of threats faced by Egypt which are now more in the anti-terror field.

While the US is re assessing the level of FMF grants to Egypt, Cairo is looking for new sources of advanced weapons.

Germany is emerging as one of the new suppliers of military systems to Egypt, along with Russia and France. The German press has quoted members of the opposition and a Swedish monitoring body that have pointed to the growing role of Germany equipping Egypt with modern systems.

According to these reports, 35 requests for the export of German made defence systems to Egypt were approved in 2017 by the German government, and total defence exports to Egypt last year amounted to 708 million euros.

In the past five years, German defence exports to Egypt have jumped by 205%, compared with the total exports in the previous five years.

The main contracts are for the marine division of the company ThyssenKrupp, which last year provided a 250 million euro submarine (one of four submarines that the German government approved to supply to Egypt, at a cost of about one billion euros), Diehl Defence, which sold 330 air-to-air missiles to the Egyptian Air Force, Airbus Defense and Space, the Keller and Koch company, which produces light weapons, and Kraus-Maffei Wegmann (KMW), which manufactures armored personnel carriers and tanks.

The increase in the export of German arms to Egypt has continued in recent months. Experts say that the German attitude towards Egypt as a client for German made weapon systems has totally changed since the signing of a huge deal worth eight billion Euros in 2015 by Siemens, for the construction of two power stations in Egypt.

According to the Stockholm International Peace Research Institute (SIPRI), which published a report on the global defense industry earlier this month, arms sales to Egypt are part of the expansion of German defense exports to the Middle East and to North African countries in general. Between 2012 and 2017, according to the data, Berlin signed deals for the sale of arms to Egypt, Algeria, Tunisia and Morocco worth 11.2 billion Euros.

With regard to the Middle East, the export of German arms to this region has increased by 109% in the past five years, despite the decline in German exports to other regions. According to the research institute, about half of the weapons to the Middle East come from the United States and a quarter from Germany. 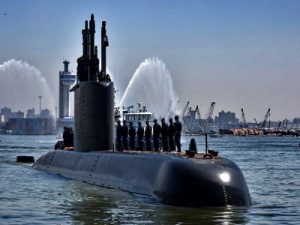 According to the Institute for National Security Studies (INSS) in Tel Aviv, Egypt’s new weapons procurements – more than it could have acquired from the US even with US military aid – should enable Egypt to project its military power throughout the region.

Of particular importance are the Mistral helicopter carriers, as these ships are specifically designed for power projection operations. “The mere possibility of sending a landing force armed with main battle tanks and accompanied by attack helicopters to the straits of Bab el-Mandab or even as far away as Iran should give Egypt a strong say in the region.”

According to the INSS, Egypt achieved this capability with a great deal of financial aid from the Gulf states – Saudi Arabia, the UAE, and Kuwait. “Thus this process should be seen in part in context of the Saudi-led coalition against Iran. Egypt is currently a part of the coalition fighting in Yemen. Its newly-acquired weapons, and specifically its naval force, could influence the outcome of the war in favor of the coalition.”

The Israeli research institute says that Egypt has become highly dependent on Saudi Arabia and the UAE, and while Egypt aspires to be a leading power in the Middle East, its freedom of action is obviously limited.

Republished with permission of our partner defenceWeb.