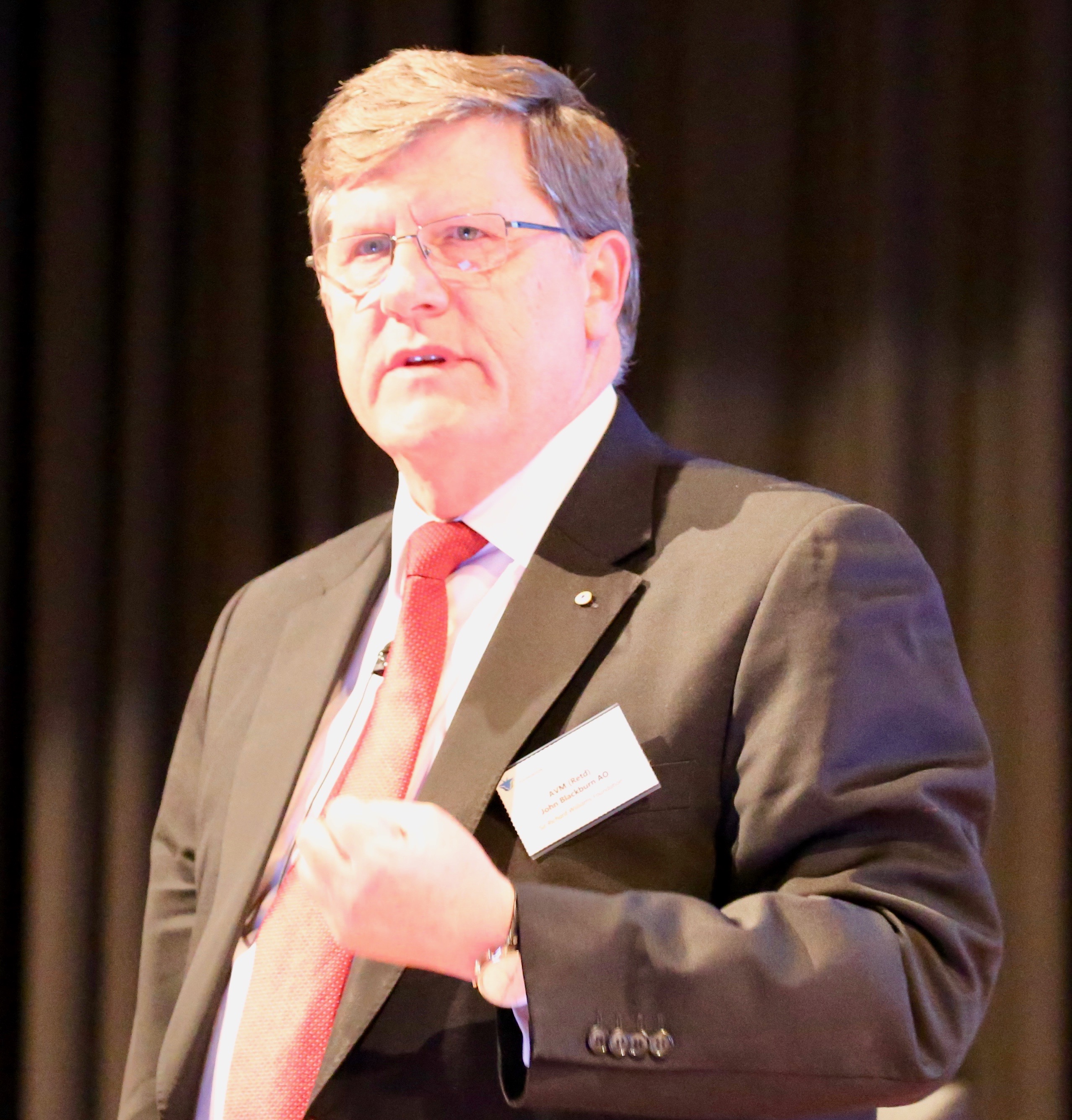 It is clear that as the Russians and Chinese enhance their challenges to the liberal democracies, a key requirement for the liberal democracies will be an ability to mobilize under the threat of contested operations and to provide for resilient capabilities to defend the nation and ensure that the military forces can actually operate in times of crisis.

It does not appear that the liberal democracies are addressing this challenge with the seriousness and urgency that it deserves.

After his presentation, I had a chance to discuss Blackburn’s thinking and his sense of the approach necessary to shape a resilient energy structure for Australia.

In his view, energy security and national security are not separate domains but inextricably interconnected.

“There is an assumption that “business as usual” will provide for energy security in “peacetime.”   However, this ignores the reality that we already operate in a contested space and “business as usual” is not what it was a decade ago.  We are already in conflict with our competitors.

“Russia and China are reportedly doing a lot to infiltrate critical infrastructure systems. They’re effectively attacking western populations.  We need to rethink our assumption that there is “business as usual” in “peacetime” and that when conflict breaks out we will address the issue of “business not as usual.”

He argued that there was a broad transformation of economies, of infrastructure technologies, of the evolution of supply chains, and climate change impacts, all of which are cross-cutting and creating a new strategic environment for defense and national security.

For Blackburn, the scenarios being treated by the Australian government with regard to disruption of energy systems are really rooted in the past. “What happens if we have a security problem in the South China Sea through which more than 50% of Australia’s refined fuel passes?” The extant National Energy Security Assessment published in 2011 does not address such issues.

Rather than taking a classic market view of energy supply, there needs to be a national security template which would assume disruptions can well be rooted in conflict among adversaries and provision needs to be made now with that in mind.

“The Australian based oil industry maintained that we shouldn’t be using conflict scenarios to look at our energy security. This makes no sense for the world in which we live as opposed to the world we might wish to live in.”

For example, several of the owners of energy generation and supply are nationalized companies outside of Australia delivering energy to Australia. A foreign government owned firm is certainly not interested in addressing Australian national security interest.

“Industry focuses on reliability of supplies which is not all the same thing as security of supply. This leaves our military forces and our broader national security very vulnerable.

“For example, some of the contracts to Defense, for delivery of fuel to our northern bases, our most important bases in terms of defense, were issued under a clause called “best endeavors only.”

“In effect it is a situation in which industry can say: “We’ll try and get you the fuel there but if it doesn’t happen, sorry.”

“That’s the sort of contract we had in place when I did my fuel supply security studies.

Blackburn discussed the Defense White Paper and highlighted that the assumption clearly is that the market will provide energy throughout the needs cycle for defense.

But he contrasted this optimistic assumption with the results of a recent review, which the International Energy Agency did of Australia’s energy policies.

“And it is a stark contrast to what the government’s 2015 Energy White Paper and in effect it condemns our energy security policies generally.  In the absence of a realistic, security based, Energy Policy in Australia, it not a surprise that there’s also no Defense operational energy strategy or policy .”

The other thing the IEA has said is that we’re the only IEA country which is a net importer of oils that relies completely on commercial stock holdings to meet our obligations as an IEA member country, but we don’t mandate what the stock holdings should be.

As a result, Australia cannot meet its IEA member obligations; i.e. Australia is the only member country that doesn’t meet its stock holding obligations.

“The IEA Report also highlights that our oil stocks are at an all-time low. There are no strategic oil stocks and we don’t require the industry to maintain certain levels like the Europeans do.  This raises the fundamental question of whether business as usual can meet core Australian security and defense needs.

“It’s fundamentally changed in the last five to eight years.

“And we need a policy which not only recognizes the new strategic reality but builds our energy capabilities to meet our core needs for a national security point of view.” The real hook in the IEA report though was this statement, which said, “It’s less clear how the country (Australia) would respond in the event of a serious oil supply disruption leading to market failure.” In other words the IEA says, “We don’t know/ can’t see what you’ve got planned, in cases of serious market disruption.”

“I can give the IEA an answer. There’s nothing planned. There is no plan B in this market. If it doesn’t work … bad luck.”

The market is not designed for security.

“We’re unique amongst developed countries in the world in that we do not address security of supply. And yet we’re at the end of a very long supply chain.

“We have a 95% dependency on the maritime trade for our imports compared to the world average, which is 65%.”

He argued for the need for a system wide design in Australia to address the energy security issue in a comprehensive manner.

Something similar to what the RAAF has done with Plan Jericho is needed for an all of government approach to energy security.

“What could happen if we took the Plan Jericho design thinking on a system level from the military and applied it to all the separate energy components in this country?”

He noted that the pieces of the energy equation are spread throughout the government and throughout the country. “What could we do to integrate all of this to improve its resilience, its security, the economics of doing it, and give us more flexibility in the system?”

For Blackburn, as new energy technologies are introduced the country needs to take a systems view. As an example, Blackburn cited the case of hydrogen as an emerging energy component which could support the development a system approach.

“What I have read is the possibility of the excess power generated by new technologies such as solar and wind, being stored and transformed through a medium such as hydrogen.

“The stored hydrogen could be used to generate electricity through gas turbines, to produce ammonia, to supplement methane gas networks, to power transport utilizing hydrogen fuels cells or for emerging export markets such as to Japan.

“If you take this approach, you have the choice of time and product depending on what, when and where you need it.    Use of new energy technologies under a systems design approach could provide key parts of a scalable, resilient, affordable and secure energy system for Australia.

“The market won’t come up with this design by itself; it needs Government leadership.   Defense could play a key role in prompting the Government to shift to a system wide design approach to ensure redundancy and security of supply based on its recent experience in trying to address the design of the integrated force.

“Without one, we’re just running around like headless chooks (Australian for chickens).”