Nigeria’s Proforce Limited is preparing to launch the 2019 version of its PF Ara 2 Mine Resistant Ambush Protected (MRAP) vehicle as it expands into the naval and unmanned aerial vehicle markets while increasing local content in its vehicles.

The Ara 2 (meaning Thunder) is a 4×4 Armoured Personnel Carrier, with thirty presently being produced for the Nigerian Army. Foreign countries have requested for another twenty, according to Raymond Asare-Sintim, Business Development Executive at Proforce.

The PF Ara 2 is a monocoque vehicle built to STANAG level 4569 protection standards with double skin protection of Level 3A and 3B, and an underbelly of 4A and 4B. This protection level ensures an underbelly with a V-shaped hull design that can withstand a 100 kg mine. The higher ground clearance of 442mm and the central tyre inflation system enhances the vehicle’s off-road capabilities and can take this vehicle to urban, mountainous and challenging rural terrains, Proforce said.

With the capacity to carry up to 12 personnel plus equipment, the PF Ara 2 can be configured into multiple MRAP variants for a wide range of missions including recovery, command and control, ambulance, field kitchen and reconnaissance. 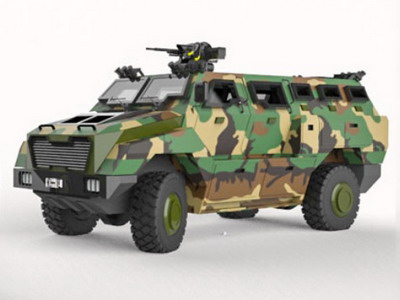 The Ara 2 has a length of 7.1 metres and height of 3.3 m, and gross weight of 15 tons. A 12.7 mm machinegun can be mounted on a 360 degree roof turret which can be open or fully enclosed. Optional equipment includes slat armour, gun ports and grenade launchers as well as reactive armour, according to Proforce.

Proforce builds armoured personnel carriers (APCs), MRAPs, patrol boats, hard armour plates, and ballistic helmet and vests. The company is diversifying into new areas of the defence industry. These include manufacturing of communication devices in collaboration with technical partners from Pakistan and manufacturing of unmanned aerial vehicles (UAVs) in collaboration with a company from South Korea.

Proforce believes Nigeria is fast becoming the defence manufacturing hub for Africa. This is only possible due to the encouragement and total commitment of the Nigerian government. Sintim told defenceWeb that there has been huge expansion in Proforce, which aims to dominate the African market in the next few years.

One of Proforce’s most prominent products is the PF1 armoured personnel carrier (APC), which has been upgraded to the PF2 with enhanced protection to B7 level and all-terrain tyres which improve ground clearance. Proforce has achieved exports of its APCs to Rwanda, the Central African Republic and South Sudan. These vehicles have been deployed with United Nations’ missions.

This article first was published by our partner defenceWeb on December 14, 2018.