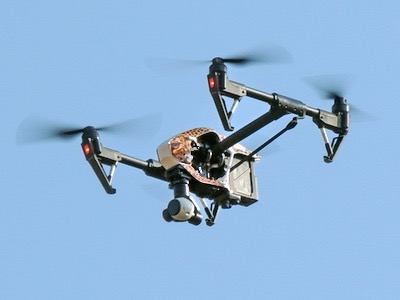 Unmanned Aerial Vehicles (UAVs), also known as drones, have applications in multiple industries due to their ability to conduct surveillance and gather data on sites in almost any environment. UAVs are now being used by security companies to keep watch over properties and mines around the country.

This was one of the topics under discussion at the recent Drones and Digital Aviation Conference held at Emperors Palace Convention Centre.

A talk on “Drones in the security sector and the impact on the human element” was presented by Kim James, the director for Drone Guards, a South African drone security surveillance company. Drones provide the security sector with proactive operations, incident response and post incident data, she said. Proactive operations include prevention of and early detection of crime and intruders on sites leading to a quick incident response that is networked between the drone and the relevant people.

The data that drones gather is then used in post incident data analysis allowing for informed mitigation, monitoring and decision support, James explained. Drone Guards do visible and covert surveillance in residential estates and industrial properties, day and night. Since using drones for surveillance, James said that they have found a reduction in human activity along the drones’ routes. An example of a drone’s security capabilities came when Drone Guard captured footage of criminals trespassing on monitored sites and upon the criminals fleeing the scene, a drone was able to follow and reveal how the criminals entered the premises. James believes that the future of security utilizing drones will entail a fleet of UAVs watching over properties, possibly without a pilot.

In mines, security is a big issue, as Jaacie Visagie, manager for safety and security at UAV & Drone Solutions (UDS), explained. “The last thing you want to have is suspects running around, falling in pits and unfortunately this happened.”  Safety for guards is another issue, as Protea Coin Group recently had two fatalities on the same mine last year. UDS believe that with more technology in the field, there is less risk and less people equating to less fatalities.

UDS have now developed a motion sensor device hidden in silicone rocks to pick up any movement and alert the control station, which will send out a drone to evaluate the situation and decide what actions need to be followed. UDS also has similar devices that detect smoke, temperature, humidity and on/off switches. The device currently detects out to eight metres with 70-degree wide angles. Co-director of UDS, Georges Sayegh, believes the integration of these motion sensor devices with drones in the security sector can be a game changer. “With the circumference of mining, it requires these kinds of devices there. It is very important because you are flying the drones within 30-40 kilometre radius areas, day in day out, so now we fly to triggers”.

Drones are increasingly being used for wildlife conservation and anti-poaching missions. Sayegh said UDS was involved in a trial in the Kruger National Park, which was successful in the deterrence of poachers over the two years UDS were in South Africa’s largest game reserve. However, they did not catch any poachers during their time there. “We never found them because they knew we were there; they were told we were there and the bush telegraph is just incredible because of the amount of corruption that went in there at ground level”. UDS currently has another project in the Kruger, flying covertly using thermal sensors at night and with more drones. Sayegh said the new Kruger project is extremely successful as the joint use of drones and sensor devices is a “game changer”.

This article was published by defenceWeb on January 16, 2020.