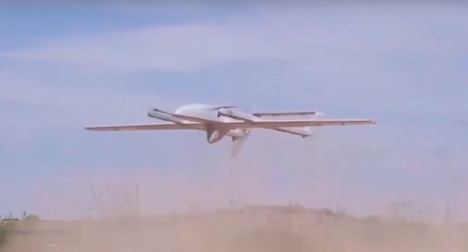 As Russian and Chinese-made anti-aircraft weapons become ever more lethal, human pilots are, quite literally, the last thing the Army wants to send into harm’s way. Before the Future Attack Reconnaissance Aircraft makes its first probe into enemy airspace, and long before the Future Long-Range Assault Aircraftcarries troops deep into hostile territory, a whole array of unmanned aircraft will scout out the enemy defenses, deceive their radars, and strike vital points.

In fact, much of this drone technology should be available years before the manned FARA and FLRAA aircraft enter production, which means it can help the Army’s existing helicopters survive an increasingly dangerous world.

“What we have to do is improve our stand-off and our survivability with the introduction of some technology that will be available prior to the actual FVL [Future Vertical Lift] platform,” said Maj. Gen. David Francis, the commander of the Army’s Aviation Center at Fort Rucker, Ala. That includes a new Long-Range Precision Munition – the Army’s buying the Israeli Spike missile as an interim solution, but that may not be the permanent one – and a whole family of mini-drones known as Air-Launched Effects (ALE), because they can be launched from the missile racks on both future and existing helicopters.

“Those combined, we think, will keep us very, very competitive in that [air defense] environment until we get the increased speed and survivability of our Future Vertical Lift platforms,” Francis told me during an interview.

Air-Launched Effects aren’t the only drones the Army’s Future Vertical Lift task force is developing. The most immediate effort is a competition to replace the aging RQ-7 Shadow, which requires a runway, with a new Future Tactical Unmanned Aerial System (FTUAS), which will take off and land vertically like a helicopter, from wherever soldiers need it. FTUAS also needs to be quieter, so the enemy can’t hear it coming as easily, and to require less support equipment, so the Army can more easily deploy it to a war zone more and keep it working in harsh conditions.

The service originally selected two companies to provide demonstration aircraft, then decided to double the number to four. This year, samples of all four types are going to operational Army combat brigades, which will try out the different designs and provide feedback that helps the service shapes its final, formal requirement.

Three of the contenders – Arcturus UAV’s Jump 20, L3 Harris Technologies’ FVR-90, and Textron’s Aerosonde HQ – share a similar configuration, something we’ve never seen on a full-size manned aircraft. Each of them has wings and a pusher propeller in back for forward flight, but also quadcopter-style mini-rotors for vertical takeoff and landing. The fourth, equally unconventional design is Martin UAV’s V-Bat, a “tail-sitter” that has a single large fan for both vertical and forward flight, changing from one mode to the other by simply turning 90 degrees.

Just as FTUAS will replace the Shadow, the Army also wants to replace its long-range Grey Eagle – a variant of the iconic but venerable Predator – with a new Advanced Unmanned Aerial System. The service has revealed very little about what it’s looking for in the Advanced UAS, however.

The most innovative of the Army’s future drones, however, is definitely the Air-Launched Effects family, because ALE doesn’t replace any existing unmanned aircraft. It’s altogether new. As computers simultaneously shrink and grow more powerful, it becomes possible to build drones small enough for a person or another aircraft to carry – and to make them smart enough that they can operate largely autonomously, without a human being to provide constant direction by remote control.

Those advances make possible a radically new kind of operation — a single manned mothership launching a flock of mini-drones to scout ahead and provide a host of what the military blandly calls “effects,” from decoying the enemy with fake transmissions to jamming their radars to blowing them up. That combination of new technology and new tactics, in turn, could dramatically improve the chances of Army aviators to survive and prevail in future wars.

“When we look at ALE and Long-Range Precision Munition,” said Brig. Gen. Walter Rugen, the Army’s FVL director, “what we’re finding, in our modeling and our experimentation at Yuma last year, is you really generate that stand-off and overmatch against threats….We can stay outside their weapon engagement zone, and put effects on them.”

In the time-honored military framework where you “find, fix, and finish” an enemy, Rugen told me in an interview alongside Gen. Francis, “Air-Launched Effects are what is going to find and fix these threats, and then what the long-range precision munition is going to do is finish that threat.”

The Army’s budget request for fiscal year 2021 includes $152 million to field Israeli armsmaker Rafael’s Spike NLOS (Non-Line Of Sight) missile to three Combat Aviation Brigades. “We’re currently projecting that it would be an FY’22 initial [operational capability,” Rugen told me. “But that’s just our initial increment of the Long-Range Precision Munition. We will follow that on with more detailed requirements to fix some of the challenges that we see already with Spike [and] improve upon that capability.”

To make all this work, however, the Army needs more than new missiles and mini-drones. It also needs a digital communications system that can rapidly pass data between manned and unmanned aircraft, not through slow and error-prone humans, but near-instantly from machine to machine.

This article was published by Breaking Defense on March 19, 2020.