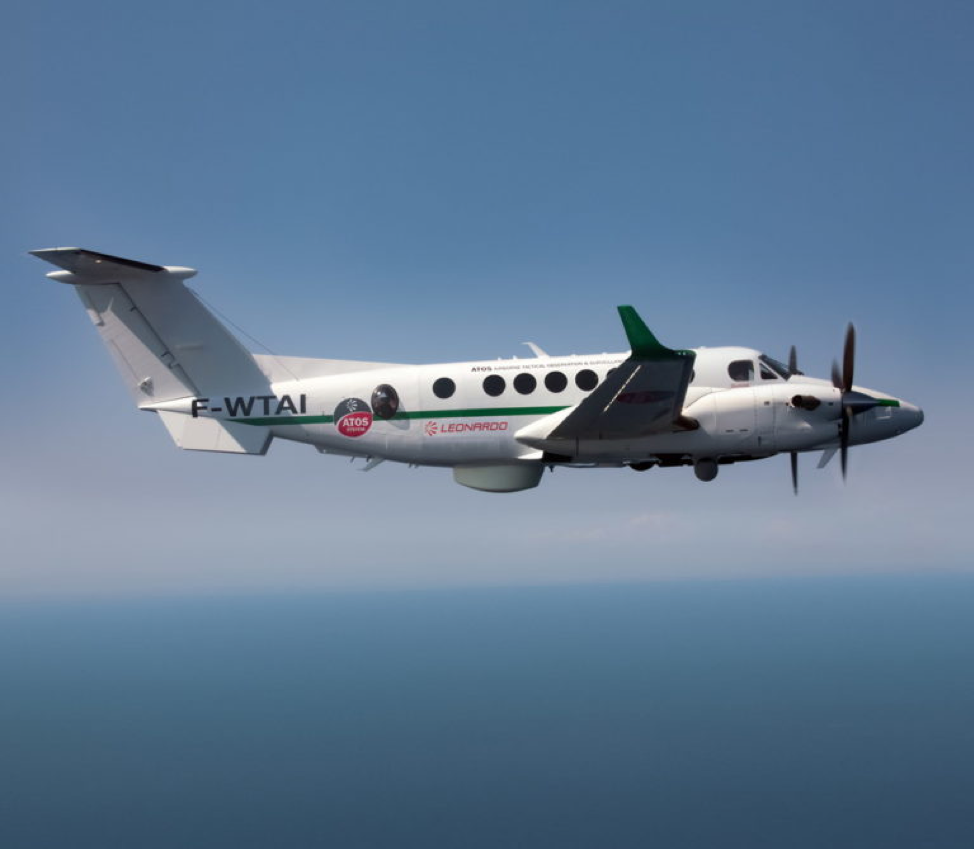 The Royal Moroccan Navy has begun using two King Air 350ER aircraft for maritime surveillance after they were configured for the role by Leonardo.

The aircraft are fitted with Leonardo’s ATOS mission system and full complement of sensors including its Seaspray E-scan surveillance radar, which allow a range of missions to be flown, including search and rescue, littoral security and the monitoring of illegal migration, fishing and pollution.

Leonardo announced on 17 February that the aircraft had gone into service “with an African Navy following their delivery by the company, which acted as prime contractor and systems integrator for the aircraft.”

In July 2016 Leonardo announced it had been contracted to supply two King Air 350ER aircraft equipped with its ATOS mission system to an undisclosed African customer. At the time, Leonardo said it was the third customer to have been provided with an ATOS system fitted to a Beechcraft King Air which has previously been selected by nations including Ecuador.

Morocco’s two aircraft (CN-TMR and CN-TMS) were both built in 2016 and appeared in France in early 2018 for the fitting of their mission equipment. This includes the ATOS (Airborne Tactical Observation and Surveillance) system, Seaspray 7300 radar, identification friend or foe system, Link 11 data link and EOST23 electro-optical sensor. Other additions include ventral fins and bubble observation windows.

When announcing the King Air 350ERs were flying maritime surveillance missions, Leonardo released a photo of a King Air 350 equipped with the ATOS system and wearing the test registration F-WTAI, but this is believed to be an aircraft for the Algerian Air Force, which was seen in France in mid-2012 wearing that registration whilst undergoing refit. Algeria acquired six King Air 350s for the surveillance role in 2010/2011.

Leonardo said the King Air 350ER maritime surveillance aircraft is “a growth area for the Company, with its ability to draw on its broad in-house expertise in sensors, mission systems and platform integration allowing it to offer a tailored, mission-ready aircraft to customers in a cost-effective manner. Leonardo also offers this service for mid-life upgrades, taking an existing aircraft and equipping it with advanced new sensors, all controlled through its ATOS mission system.”

As well as in Africa, Leonardo said it is seeing interest from customers in Asia Pacific and the Middle East for its ‘surveillance-ready’ offering. It expects to see more customers procuring a complete, tailored capability. ATOS is already in operation on-board more than ten different aircraft types, with more than 60 systems installed on platforms including the ATR 42(72) MP, Diamond DA-62 MSA, Bombardier Dash-8, Beechcraft King Air 350, Casa CN235 and Piaggio Aero P166 fixed wing aircraft as well as Leonardo Helicopters A109, AW139, AW169, Bell 412 and Airbus Helicopters AS350B3 helicopters.

This was published by defenceWeb on February 12, 2020.