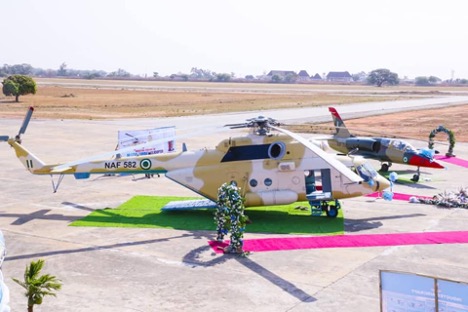 The Nigerian Air Force (NAF) has inducted into service a second Mi-171E helicopter in a ceremony that also saw the induction of another L-39ZA trainer that had been returned to airworthiness.

The Mi-171E (NAF 582) originally arrived in Nigeria by Ilyushin Il-76 transport on 2 December and was introduced into the NAF’s inventory on 24 December at NAF Base Kaduna. The NAF received its first Mi-171E (registration 581) at the beginning of 2020 and it was officially inducted into service during a ceremony attended by President Muhammadu Buhari on 6 February along with two new AW109 Power helicopters.

The December event was attended by President Muhammadu Buhari, Minister of Defence Major General Bashir Magashi (rtd); the Chief of Defence Staff, General Abayomi Olonisakin; and the Chief of the Air Staff (CAS), Air Marshal Sadique Abubakar, as well as other dignitaries.

Buhari said he had ordered the release of two AW101 helicopters from the Presidential Air Fleet to the Nigerian Air Force and his administration had delivered 23 new aircraft to the NAF in recent years, with more on the way.

“Today’s induction brings to 23 the number of brand new aircraft that have been added to the inventory of the Nigerian Air Force since we came on board in 2015 and is a clear reflection of our unflinching commitment to ensuring the security of Nigeria and Nigerians,” he said. The 23 aircraft include 10 Super Mushshak trainers, five Mi-35M attack helicopters, four A109 Power helicopters, two Mi-171E and two Bell 412 helicopters.

“These 23 new aircraft are aside the 15 additional aircraft, including 12 Super Tucano aircraft from the United States of America and 3 JF-17 Thunder multi-role fighter aircraft from Pakistan that have been procured and will soon be delivered,” Buhari said.

He said these are aside support towards reactivating over 25 previously unserviceable aircraft, “significantly boosting the capacity of the service to deliver robust air power in support of our counter terrorism and counter insurgency efforts.”

Meanwhile, the NAF expects to take delivery of six of its 12 Super Tucanos by the end of June 2021. These will be based at NAF Base Kainji.