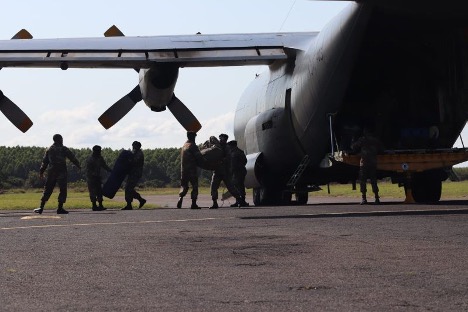 To use – aptly – a naval expression – it’s all hands on deck as the national defence force stretches itself to support police efforts to halt arson, looting and general civil unrest in South Africa.

The naval expression fits the activation and deployment late last week of elements from the Maritime Reaction Squadron (MRS) of the SA Navy (SAN). The latter part of last week also saw boots on the ground in numbers, in particularly Gauteng and KwaZulu-Natal as well as the Western Cape, boosted thanks to airlift and trooping efforts of the SA Air Force (SAAF). A pair of 28 Squadron C-130BZs flew a number of missions between AFB Waterkloof and King Shaka International Airport, north of Durban. Air Force Agusta A109 and Oryx helicopters are tasked for trooping and medevac with AFB Durban-based 15 Squadron, although not officially named, probably the lead rotorcraft unit.

“This Naval component will reinforce forces deployed in KwaZulu-Natal in an effort to protect and secure critical government infrastructure and prevent sporadic incidents of violence, burning of buildings, road blockages, looting and violence.

“All forces deployed in KwaZulu-Natal work in co-operation and support the SA Police Service (SAPS) under the code name Operation Prosper. Deployment of the SANDF is to provide protection for SAPS and other law enforcement agencies while they carry out their constitutionally mandated law and order duties,” SANDF LinkedIn correspondent Captain A Tamela wrote.

In addition to the Navy,  Special Forces personnel have been seen in Hornet vehicles in Gauteng.

At the time of publishing there was no update on the overall SANDF deployment from its Directorate: Corporate Communication (DCC). This, despite its director, Brigadier General Mafi Mgobozi, indicating updates would be provided on a regular basis from Defence headquarters.

The Joint Operations division told parliament’s Joint Standing Committee on Defence on Sunday over 21 000 military personnel are currently deployed across the country, including 7 000 in Gauteng and 5 000 in KwaZulu-Natal. Units are on standby in other provinces which are not yet experiencing protest actions. National key points and other assets are being protected, including harbours, airports, refineries, power generation infrastructure, the Union Buildings, Parliament and others.

On 16 July, Defence and Military Veterans Minister Nosiviwe Mapisa-Nqakula signed a notice, published in the Government Gazette,  deploying 2 500 SANDF personnel  “for service in co-operation with the SA Police Service for the prevention and combating of crime and maintenance and preservation of law and order in the Republic of South Africa for Operation Prosper. The deployment will be over the period 12 July 2021 until 12 August 2021.”

The deployment, which started at 2 500 military personnel, spiralled upward on a request from SANDF Commander-in-Chief, President Cyril Ramaphosa, with opposition parties also wanting more soldiers on the ground. A final number of 25 000 was agreed to. This includes all SA Army Reserve Force regiments and units.

The cost of the deployment has been put at around R615 million.

This article was published by defenceWeb on July 19, 2021.

Editor’s Note: What is Operation Prosper?

The Minister of Defence and Military Veterans, Nosiviwe Mapisa-Nqakula, announced in the Government Gazette that 2,500 troops would be deployed to help police bring rioting in KwaZulu-Natal and Gauteng under control.

Dubbed Operation PROSPER, the deployment will be from 12 July to 12 October 2021.

The troop deployment aims “for service in cooperation with the South African Police Service for the prevention and combating of crime and maintenance and preservation of law and order in the Republic of South Africa”.