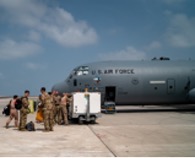 “In a resource constrained environment, for both the US and our allies, moving assets at the speed of relevance is vital to mission success,” said Colonel Uduak Udoaka, chief of logistics operations, US Africa Command.

First developed at the Africa Distribution Network Forum in late 2020, the PoP missions sought to leverage airlift capability and available capacity from multiple allies to extend one another’s logistical reach. In February PoP 1.0 launched, leveraging a C-17 Globemaster III from the Heavy Airlift Wing in Papa, Hungary, to deliver supplies in West Africa.

“We learned a few lessons from PoP 1.0 and wanted to take the concept further,” said Udoaka “Our goal was to support emerging requirements using different ports of embarkation and multimodal options.”

Several months later, following engagements with French counterparts, a PoP 2.0 flight was planned to deliver supplies originating in France, transiting through Germany, and terminating in Niger on an already-existing mission. The cooperation among US and French logisticians resulted in transporting more than 14 000 pounds of supplies and parts as part of a reoccurring resupply mission to West Africa.

“While operational costs are important in our line of work, timing is critical to logisticians,” said Udoaka. “This PoP highlights the criticality of ‘thinking smart and not hard’ when it comes to distribution across Africa.”

For the US and its partners, logistics sharing is an operational imperative, the US military’s Africa Command said. However, challenges still remain: from customs clearances and exonerations to fiscal, equipment, and personnel resource gaps. PoP 2.0 overcame some of these challenges and set precedent for US Africa Command and the ADNF to establish a sustainable model for future deployment and distributions operations.

“This came together as a result of a lot of hard work, innovative thinking, and tenacity across several professional logistics teams that must be commended,” said Udoaka. “In less than a year, despite a global pandemic, we’ve moved the needle from discussion topics on paper to realized outcomes and operational effects.”

This was published by defenceWeb on September 15, 2021.

The featured photo: A US Air Force C-130J being loaded in Djibouti ahead of deployment to Mozambique.

On 6 August, US and French forces bolstered logistics capabilities with the second in a series of Proof of Principle flights. The mission, known as PoP 2.0, transported medical supplies and repair parts over 2 500 miles from Europe to the Sahel region and marked a significant step for logistics planners working to build a multinational, partner-centric distribution network, increase capabilities, and expand operational reach.