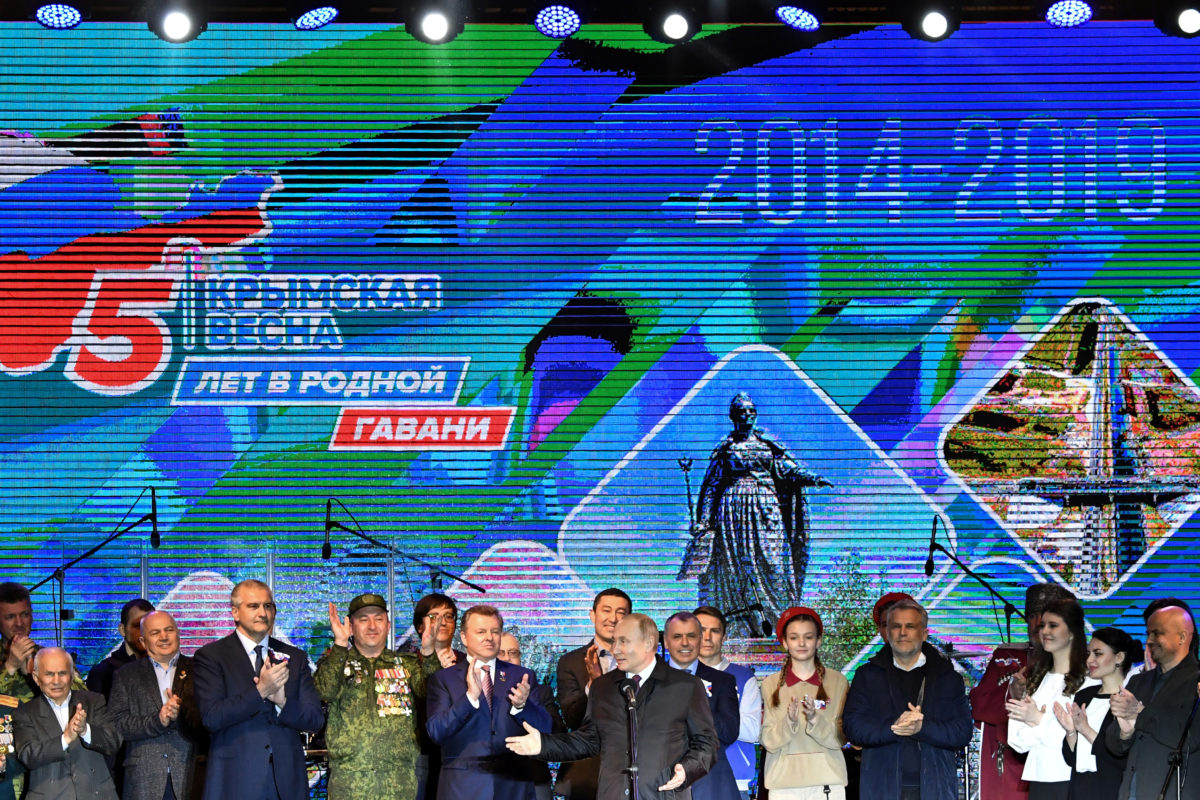 2014 is a decisive strategic turning point.

President Putin started his rollback of Western advancement into his perceived zone of influence.

And on the day of the 5th anniversary, Putin celebrated the event as follows:

President Vladimir Putin led thousands to chant “Russia!” on a visit Monday to Crimea marking the fifth anniversary of the Black Sea penisula’s annexation from Ukraine, as NATO and the European Union once again strongly condemned the land grab by Russia.

Speaking at an outdoor concert in Crimea’s regional capital of Simferopol, the Russian leader hailed Crimea’s residents, likening them to the Red Army soldiers of World War II.

“Russia has taken you into its fold with delight and joy,” he told the crowd. “We will fulfill all of our goals … because we are together now.”

And from this event, Putin is building out new defense capabilities to pressure Europe a la cart as he sees it, not as “Europe Free and Whole” as has been the aspiration of Western leaders for some time.

Not only has Russia violated the INF treaty and built out offensive longer range strike weapons, but with the Trump Administration indicating that they intend to pull out of the treaty, Putin following in the long experience of the Soviet Russian leaders before him puts the cause for any action he takes on the “aggressive” West.

He grew up politically in the Euromissile era in which the INF treaty was eventually negotiated; and his tactics and his appraoch hark back to Soviet leadership strategy of the 1980s.

Last month, the Russians have moved long range bombers into Crimea “in response” to the US putting Aegis Ashore in Poland and Romania.

One could easily ask how a missile defense system is in any way equivalent to strike system like a bomber, but it really does not matter if the logic is not there.

The political logic is there — which is to incorporate Crimea into a forward based Russian military system.

According to an article published on Sam LaGrone on March 18, 2019 on USNI News:

Russian defense officials say they are deploying “squadrons” of Tupolev Tu-22M3 Backfire bombers as a counter to U.S. Navy Aegis Ashore missile defense installations in Poland and Romania, according to a report in Russian state-controlled media on Monday.

In comments made to the TASS news agency, Russian lawmaker Viktor Bondarev said Russia was sending the bombers to the Gvardeyskoye airbase in Crimea in a move to directly counter the U.S. Aegis Ashore missile defense installations.

“The deployment of American missile defense systems in Romania came as a major challenge, in response to which the Russian Defense Ministry made the decision to deploy long-range missile-carrying bombers, Tupolev Tu-22M3s, at the Gvardeyskoye airbase,” Bondarev said. “This move has drastically changed the balance of forces in the region.”

The seizure of Crimea was a key launch point in shaping a broader global engagement, which has been seen in the Middle East in Syria and in working relationship with other authoritarian leaders worldwide.  From this point of view, the Putin strategy tis about enhancing Russia’s global presence and global interests through engagement with and shaping global working relationships with authoritarian leaders worldwide.

Although clearly not the same, the Puti effort reminds one of the days of the Spanish Civil War where Authoritarian leaders operated together to advance their core interests, without begin directly confronted by the liberal democracies, who were too focused on their domestic affairs to really do much about it.

In a piece by Simon Shuster published April 4, 2019 by Time Magazine, the author analyzes the Putin appraoch.

The title is quite accurate in characterizing the approach: “How Putin Built a Ragtag Empire of Tyrants and Failing States.”

The Russian campaign reaches from major conflict zones such as Venezuela, Libya and Syria to the more obscure corners of Africa and, as al-Bashir hoped, to Sudan.
What comes through is a newfound Russian willingness, even an eagerness, to involve itself in wars and cultivate regimes anywhere Moscow sees a chance to assert itself.
But unlike the Cold War, when the communist East competed with the capitalist West as equals, the new contest is being waged in an altered world.
Trump’s America no longer projects interest in foreign affairs, democratic ideals or even alliances.
And China, with an economy eight times the size of Russia’s, has replaced it as the major alternative to the West.
Yet Putin has managed to keep Russia in the global picture–punching far above its weight through a combination of opportunism, bluster and common cause with isolated despots to whom Moscow offers weapons, protection and respect.
“We are not out to rule the world or impose some ideology on other countries, be it communism or capitalism,” says Senator Andrei Klimov, a fixture in Moscow’s foreign policy circles.
“We are merely out to defend our interests. And we will do that wherever they arise.”
Defense Decisions
01/19/2023
By Justin Katz