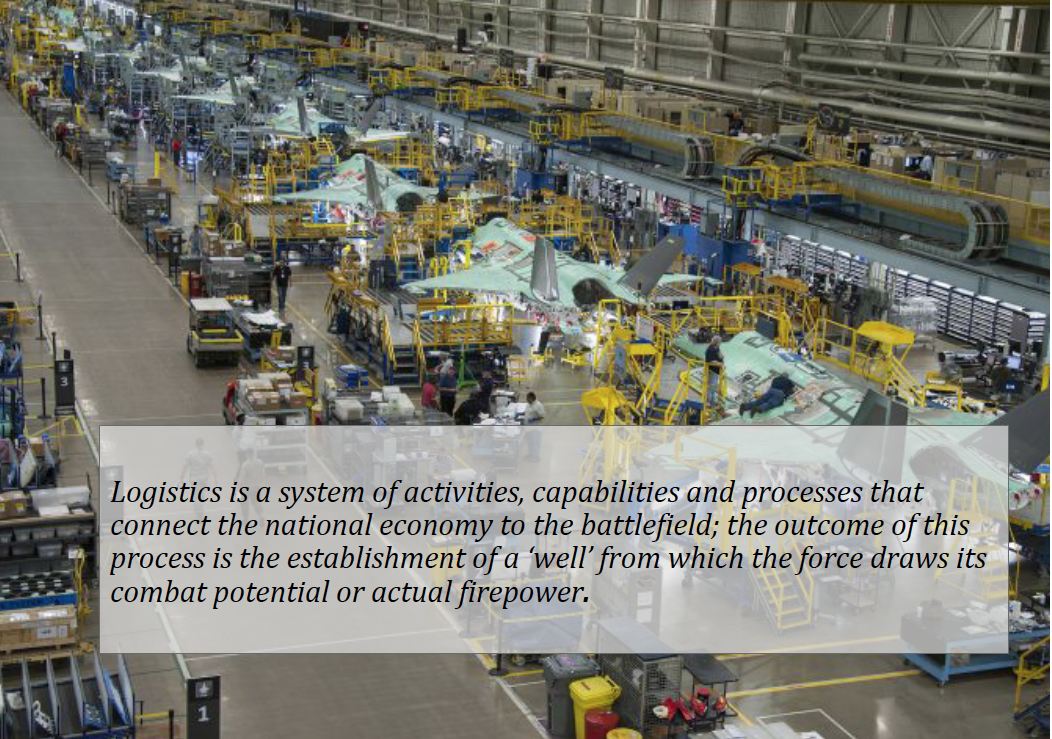 The strategic shift away from the Middle Eastern land wars towards the return to direct defense against the authoritarian powers carries with it another strategic shift — namely, the shift in focus from sustaining expeditionary operations with a fed-ex type logistics approach to one where support in depth is required.

What is required a shift from the heavy reliance on commercial logistics solutions to more robust mobilization ones.

Obviously, at the center of such a shift is an enhanced role for domestic industry to support a nation’s military as well as ensuring that global systems being used by a nation’s military have well thought out and well-stocked support solutions as well.

At the recent Williams Foundation seminar, the focus was upon the Australian approach to dealing with this challenge.

In Australian terms, given the size of the population, the workforce and the economy, no one is seeking what a country like the U.S. would consider self-sufficiency.

It is about building in greater self-sufficiency, supportability and local support as a core strategic goal.

Without doing this, not only would the Australian Defence Force (ADF) and the nation be at risk in a regional crisis, but the Australian effort hope to trigger rethinking across their alliance structures.

For example, in the area of F-35 support, the Aussies will be key drivers in working to ensure that the U.S. actually delivers on a global support structure for the F-35, rather than simply seeking to preserve the US depot support structure.

There is a broad rethink going on in Australia with regard to how to move forward with industry and its relationship with the ADF.

One key line of effort is to shape innovative ways to integrate industry within the ADF sustainment approach.

An example of the approach was provided at the seminar by Wing Commander Alison McCarthy, Commanding Officer of the Heavy Lift, SPO.

She outlined a platform stewardship approach within which industry is a full partner with the Commonwealth with regard to ensuring the availability of lift and tanking aircraft.

She noted that although the Commonwealth retains ultimate decision-making authority with regard to the sustainment approach, industry is broadly engaged in the effort.

“What do we expect of our stewards?

“To do everything necessary to make the jet fly – today, tomorrow, until PWD. Not just those things explicitly described in the contract!

“To provide the SPO with information and recommendations that appropriately resource the LOT management of the platform.”

She then provided a graphic which highlighted the nature of the working reaitonship between industry and the RAAF as follows:

Such an approach is designed to get more efficient support to ensure higher availability rates for aircraft.

For enhanced support during a crisis, there would is a need to add to this approach enhanced availability of parts beyond the normal ops cycles.

But the current system would still lead to much greater efficiency in understanding critical parts flows, a key part of providing for a sustainable force in a crisis.

A second key line of effort would clearly be to standup industry which could provide capabilities directly to the ADF and be part of a global export strategy.

There is probably no area potentially riper for doing this than with regard to the development and production of weapons.

At the seminar, a UK speaker, Chris Stevens, Head of Air Domain, for MBDA, provided a look at how the UK shaped a sovereign approach to weapons development.

Clearly one of the key points in the MBDA approach of note to Australia is the building of a portfolio of modular weapons.

If Australia is to take sustained operations seriously, weapons stockpiles need to be increased, and having modular missiles would be clearly the most efficient way to go about it.

With its significant test ranges, and clear interest in regional allies and others in using these test ranges, there is clear opportunity to expand its work in the weapons domain.

A third key line of effort is underway with regard to shipbuilding.

The new “continuous shipbuilding” approach is designed to expand the industrial players working with the Commonwealth at the same time as they stand up more capability within country.

The new frigates to be built with the UK and Canada, or the new submarine to be co-developed with France are two key examples.

The Department of Defence and the Royal Australian Navy have put in place an approach which allows for both greater domestic sustainability and enhanced integration not only within their own force but for allies as well.

As Vice Admiral (Retired) Barrett has put it in various past interviews, the approach is to separate the hull builds from the combat systems build.

The combat systems build designed to take any new platforms and integrate them throughout a scalable force.

And the combat systems decisions are also shaped to enhance interoperability with core allied navies as well.

The ability to build software in common with core allies is a key part of how to ensure that the force is sustainability, modernizable, and scalable.

At the seminar, an example of how scalability would work in dealing with a core emerging threat, namely hypersonic missiles was provided by Jerome Dunn, Chief Architect, Counter Hypersonics, from Northrop Grumman.

His presentation focused on how the U.S. was looking at the challenge, but for Dunn the core point  was to shape an offensive-defensive enterprise within which an architecture is created in which platforms distributed across the battlespace could contribute to the defeat mission against hypersonic missiles.

This means that Australian contributions with regard to F-35s or Aegis systems, for example, are part of the broader allied capability in the Pacific and could be focused on where the threat was directed, either at allied or US forces.

The combat systems approach being taken by the Australian Navy is clearly very symmetrical with the architectural focused sketched at the conference by Jerome Dunn.

A fourth key line of effort can be seen with regard to how the Australian Army is working with local industry in Australia to shape a way forward with regard to remotes or UAVs.

It is clear if you spend time in Australia, there are a number of innovative smaller firms, providing very significant innovations in the software, IT and communications areas.

In effect, what the Australian Army is doing is positioning itself to take advantage of this indigenous capability in building out its future in the remotes or UAV areas.

A presentation by Lt. Col. Keirin Joyce, UAS Army HQ, highlighted a way ahead for the ADF in the UAS area.

He noted that over the past 10 years, the Australian Army have made increasing use of UAVs.

He noted that they had more than 900 systems in inventory and more than 1,000 operators within the Army.

The shift as he described it was from buying off the shelf overseas; to the development of indigenous systems.

“This means that we are shifting from considering acquisition and sustainment as separate activities; to looking at them as an integrated activity.”

The past decade pattern has been to acquire abroad; and then to set up the sustainment system in country.

The new approach is to shape an indigenous approach whereby sustainment is part of the ongoing acquisition cycle.

He argued it is not just the sovereign capability in play; but also export possibilities as well.

I would add that one could argue that this was especially important in a software driven platform, where one would ideally like to drive the software in ways that support one’s specific concepts of operations, and in which gaining software transient advantage against an adversary was crucial and in which dealing with the cyber threat is often best dealt with in terms of a code rewrite.

This means in turn that logistics support for a UAV is not simply about replacing parts but about code writing.

In short, the Aussies are looking for an enhanced contribution from industry, foreign and domestic with regard to building an integrated fifth generation sustainable force.

This is not a fortress Australia policy; it is about enhancing the capability of the force to operate from Australia outward in the region during times of crisis and to be effective and durable throughout a operational effort in an area of interest.

This is an approach different from the past decade or what was done during the “Middle Eastern” mindset.

But it is a core strategic shift which the allies of Australia need to take seriously going forward.

The featured photo is from the briefing provided by Lt. Col. Beaumont, Australian Army, during the Williams Foundation Seminar on April 11, 2019.