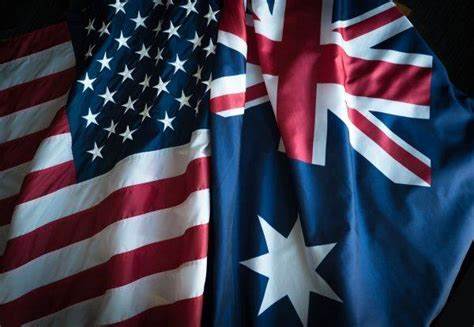 NATO and ANZUS are cousins. The defining family characteristic of the two alliances is the central, essential role of the United States.

NATO is a complex organism of 29 members; in comparison, ANZUS—just the US and Australia—is an alliance of contented simplicity.

What NATO and ANZUS have in common grows, but they are contrasting cousins.

The US and Europe get far more emotional and angry about each other than what’s usual in ANZUS.

The US rants about Europe as hedonistic and complacent, a bunch of free-riders defined by their military impotence. Tempers rise because ambitions are high, as Robert Kaplanexplains: ‘For well over half a century, the North Atlantic Treaty Organization (NATO) condensed a millennia-long tradition of political and moral values—the West, in shorthand—into a robust military alliance. NATO was a cultural phenomenon before it was anything.’

Big NATO aspirations can deliver big disappointments, as Robert Kagan judges: ‘The democratic alliance that has been the bedrock of the American-led liberal world order is unravelling.’

NATO is ever in crisis, while Australia, the dependent ally, treats ANZUS with unwavering commitment. Both thoughts are from the wonderful Coral Bell, usually delivered with a characteristic Coral twinkle.

Writing about the American effect on Oz defence in the Australian Journal of International Affairs, in 1984, Bell described the importance of ‘inertia (literally resistance to change of position) in the Canberra–Washington relationship’.

The winds of world politics, Bell said, blow softly on ANZUS: ‘Compared to the stormy seas of NATO, for instance, where there seems to have been a crisis almost every year, ANZUS has mostly been as placid as a mill-pond.’

Shortly after Coral penned those thoughts, Australia proved its inertial capability (to remain at rest or continue in a straight line) in the 1986 ANZUS bust-up, when the US ‘suspended its treaty obligations toward New Zealand’ over the Kiwi ban on nuclear ships. Nothing disturbed Australia’s grip on the alliance, even as Canberra raged at Wellington and pleaded with Washington.

ANZUS’s shrinking to two members produced one of the better lines in the ritual of kiwi–kangaroo mockery, when Labor’s Bill Hayden observed: ‘New Zealand is like the cross-eyed javelin thrower who doesn’t win any medals but keeps the crowd on its toes.’

NATO, born in 1949, and ANZUS, in 1951, share longevity. A Brookings Institution study of 63 military alliances over five centuries found a median and average age of 15 years. Half lasted six years or less; 70-year-old alliances are unusual.

When Australia seized the moment to get a pact—amid the Korean War and America’s need for a Japan peace treaty—the North Atlantic treaty was Canberra’s gold standard. ANZUS delivered silver or bronze.

Many clauses of the two treaties are identical, so variations matter.

The NATO treaty pledges the use of armed force ‘to restore and maintain … security’, stating that an armed attack against one party ‘shall be considered an attack against them all’. ANZUS says each party recognises that an armed attack on any member ‘would be dangerous to its own peace and security and declares that it would act to meet the common danger in accordance with its constitutional processes’.

In the 1952 parliamentary debate on ratifying ANZUS, Labor’s Arthur Calwell argued that the weaker wording, compared to NATO, made the Pacific pact worthless:

The only guarantee that is given in the Pacific treaty is that the nations will consult in common and that they will discuss the matters that affect their common well-being. There is no real obligation in the treaty on anybody and on some grounds it would be better to have no treaty at all.

The argument that ANZUS is worse than no treaty still rumbles.

As in the case of the North Atlantic Treaty, the precise action to be taken by each party is not specified. There is no obligation on Australia to make any immediate formal declaration of war; the United States, for its part, could not constitutionally accept such a binding obligation. But the broad intention is that an attack on one shall be regarded as an attack on all.

Today, NATO and ANZUS agree on the benchmark for what countries serious about their defence should spend. With much US shoving, Australia and Europe proclaim the budget oath to spend 2% of GDP on defence.

Each NATO member is to achieve this by 2024. Australia’s budget continues to deliver as expected, hovering a little over 1.9% of GDP on the long march to the promised land of 2%.

The shared experience of Afghanistan saw NATO make Australia one of its global partners‘to work together more closely on crisis and conflict management’. Australia and NATO embrace the same language about the need ‘to protect the rules-based international order’. And, of course, Australia and Europe still share that central/essential need for the US.

The first secretary-general of NATO said its purpose was ‘to keep the Russians out, the Americans in, and the Germans down’. Reworked today, it’d be Germany up not down. At its birth, ANZUS was to keep America in, Japan down and China out. Reworked, it’d be keep Japan up and China …?

On China, The Economist report on NATO at 70 had this thought:

China’s importance for the future is awkward for NATO. The alliance was not set up to handle it. It has no policy for dealing with it and no real relationship with it. Yet in the coming years, as America has to devote ever more attention and resources to it, China could profoundly affect the choices the alliance faces.