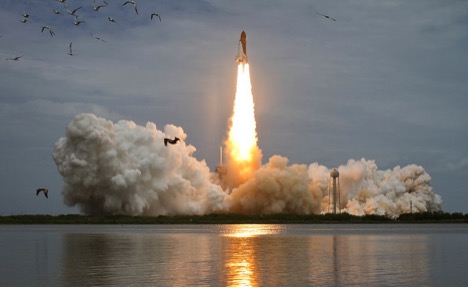 Mention the term ‘space coast’ and the image of launch pads and gantries at NASA’s John F. Kennedy Space Center in Florida come to mind. It’s a true spaceport that not only launches rockets but also stimulates the growth of the local economy and supports the clusters of aerospace companies that are located nearby.

Australia is now moving swiftly towards establishing its own space program, under the leadership of the Australian Space Agency. The agency’s recently released space strategyincreases the potential for regular launches of Australian satellites on Australian launch vehicles from Australian launch sites. It’s important to base that launch capability in Australia’s north. To understand why, let’s start with some rocket science 101.

Geographic location matters a lot in the rocket-launching world. A rocket launched from near the equator can ride on the rotation of the earth as it spins west to east and pick up kinetic energy, generating a free boost in velocity that helps to achieve orbit. Proximity to the equator is the main reason the European Space Agency launches from Kourou in French Guiana rather than from Europe.

The free boost from a spinning earth is an undeniable advantage (for those into equations, see here). It can make space access cheaper because less fuel is needed for a mission. That lowers the cost per kilogram of putting a payload into obit and allows for larger payloads. The reduction in size and weight of small satellite and ‘cubesat’ designs is further reducing the cost of space access. The amount of savings depends on the payload and the type of orbit desired.

The top end of northern Australia is a mere 12 degrees south of the equator. That makes the Northern Territory an ideal location for accessing the ‘equatorial low-earth orbit’ region of space from which rapid revisits over densely populated areas of interest can be conducted for tasks such as maritime surveillance. Northern launch sites could also support the establishment of mega-constellations of communications satellites in low-earth orbit.

This isn’t pie-in-the-sky thinking. Agreements are in place to establish a launch site run by Equatorial Launch Australia near Nhulunbuy in the NT, and the Queensland government recently released a report that recommended developing launch vehicles and investigating the possibility of establishing a launch site in the state. A proposed launch site in South Australia could easily support launches into sun-synchronous and polarorbits, which are ideal for earth observation.

There are valid defence and national security rationales for developing a sovereign space launch capability. For years, Australia has played an important role in supporting US space activities from the ground, notably through the joint facility at Pine Gap and, more recently, through the space situational awareness radar and optical telescope near Exmouth in Western Australia. Developing a sovereign space launch capability will enable Australia to do much more than simply provide the real estate and skilled personnel for ground facilities.

A sovereign space launch capability would be a logical complement to a local satellite manufacturing industry and would boost self-reliant space support for the Australian Defence Force. Current defence space projects could be undertaken with a sovereign launch in mind. These include phase 2 of defence project DEF-799, which aims to establish a sovereign space-based intelligence, surveillance and reconnaissance capability by the late 2020s, and joint project 9102, which will provide the next generation of satellite communications for the ADF by 2029.

A sovereign space launch capability, operating from launch sites in the NT, northern Queensland and South Australia, would support joint ADF expeditionary forces or missions under the ‘defence of Australia’ doctrine. It would be an entirely new type of ADF capability.

It would enable Australia to burden-share in orbit with the United States to reinforce space deterrence and strengthen resilience. As space becomes increasingly contested, congested and competitive, the loss of access to it as a result of an adversary’s use of anti-satellite (ASAT) weapons would render our forces deaf, dumb and blind. The ADF would then be susceptible to tactical, operational and strategic surprise and at increased risk of sustaining casualties and, ultimately, defeat. To paraphrase Field Marshal Bernard Montgomery, if we lose control of space, we lose the war and we lose it quickly.

Australia already contributes to burden-sharing with the US through ground-based space situational awareness, but we can do much more. Two approaches—augmentation and reconstitution—should be considered in shaping Australia’s future military space capability.

Augmentation would involve protecting the limited number of large, complex and expensive US satellites currently on orbit by rapidly deploying small satellites and cubesats in the build-up to a conflict to make it more difficult for an adversary to decisively attack them. Australia could contribute to the augmentation mission either by launching US-made satellites or by building and launching satellites to support US forces.

Reconstitution would entail rapidly launching small satellites and cubesats to fill any gaps left in large satellite constellations from an adversary’s use of ASATs at the outset of a military conflict. Denying the adversary the ability to deliver a decisive blow—a ‘Pearl Harbor in space’—would reduce the incentive for it to employ counterspace weapons in the first place and further strengthen space deterrence.

An Australian space launch capability could also increase our collaboration and burden-sharing with regional allies in ASEAN and with major partners such as Japan, the UK and France.

The establishment of an Australian ‘space coast’ would also stimulate the growth of the local space industry and the local economy. It would make little sense to base this industry in the south; the logistical cost of moving equipment to launch sites in the NT, for example, would wipe out any savings gained by launching close to the equator. Instead, Australia’s growing space sector should be encouraged to collocate near the launch sites, where it could sustain a space economy centred around a northern space coast.

Establishing a Australian space coast, where Australian-built satellites are launched into orbit on Australian rockets from Australian launch sites, has the potential to facilitate the rapid growth of a high-technology sector in northern Australia.

Malcolm Davis is a senior analyst at ASPI. Image courtesy of NASA on Flickr.