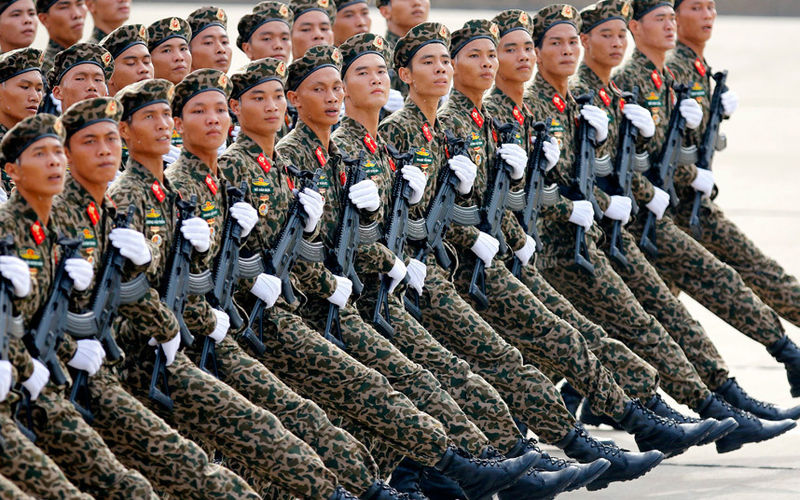 Vietnam has just released its new defence white paper, 10 years after the last one was issued in 2009. The 2019 document isn’t fundamentally different from the earlier one—there are limits on the extent of declaratory policy from Hanoi—but it does acknowledge that the global situation is evolving rapidly in a multipolar direction and countries need to ‘adjust [their] strategies to prioritise their national interests above all values’.

The Asia–Pacific region, including Southeast Asia, ‘continues to be a centre for dynamic development and occupies an increasingly important geo-economic, geo-political, and geo-strategic location’. But it’s also the major ground for great-power competition. Some of that is manifested in policies and programs, including the US-led free and open Indo-Pacific strategy, China’s Belt and Road Initiative and India’s ‘Act East’ policy.

The white paper provides little detail about the defence budget beyond acknowledging in a footnote that defence spending amounted to 2.36% of GDP in 2018. It says that Vietnam is ‘determined to develop its defence industry to meet national defence requirements’, including by making ‘selective investment in several advanced defence industrial establishments to move toward the formation of self-control, high-tech, and dual-use defence industrial groups or complexes’.

While it doesn’t offer in-depth updates on the force structure and organisation of the defence force, the 2019 paper does elaborate on the strategic context and espouse the national strategy for protecting the homeland. Its strategic doctrine is based on the core pillars of self-reliance and resilience, emphasising that the national defence struggle aims to settle all disputes peacefully.

Among the elements that threaten regional stability and prosperity are the disputes in the South China Sea, referred to in the white paper as the ‘East Sea’. The 2019 document uses strong language to characterise a deteriorating strategic environment but stops short of naming the challenger:

New developments in the East Sea, including unilateral actions, power-based coercion, violations of international law, militarisation, change in the status quo, and infringement upon Viet Nam’s sovereignty, sovereign rights, and jurisdiction as provided in international law, have undermined the interests of nations concerned and threatened peace, stability, security, safety, and freedom of navigation and overflight in the region.

This statement captures recent developments in the South China Sea, particularly apparent since the arbitral tribunal ruling in 2016, which have seriously undermined the rules-based order in the region. More than anyone else, Vietnam has been at the forefront of those challenges, ranging from the threat posed by China’s militarisation of artificial islands and naval build-up, to more targeted provocations like repeated incursions into Vietnam’s exclusive economic zone.

As a self-described maritime nation, Vietnam pays special attention to the safety and protection of the seas, committing to freedom of navigation and overflight, free trade and peaceful economic activities at sea—all in accordance with international law. The new white paper not only clearly spells out Hanoi’s position, but also endeavours to distinguish Vietnam from those who don’t contribute to the preservation of peace.

The document elucidates Hanoi’s threat perceptions and serves as a declaration of Vietnam’s commitment to peaceful cooperation and its readiness to expand defence relations regardless of political differences or economic disparities. Importantly, it rejects any notion of acceding to defence cooperation measures under coercive conditions.

Vietnam seeks to widen the scope of its international cooperation, declaring a willingness to cooperate in border protection, both land and maritime, including joint patrols and exchanges. The paper explicitly supports the right of innocent passage, as well as the security and safety of navigation and overflight in the South China Sea.

In particular, the paper declares that Vietnam ‘is willing to welcome vessels of navies, coast guards, border guards and international organisations to make courtesy or ordinary port visits or stop over in its ports to repair, replenish logistics and technical supplies or take refuges from national disasters’.

This stands as a direct rejection of measures aimed at limiting regional actors’ defence cooperation with external powers—something that China has suggested should be included in ASEAN’s code of conduct for the South China Sea.

Hanoi’s defence posture is well expressed in this concise document. It clearly conveys Vietnam’s awareness of the growing external threats to its national sovereignty as well as its determination to promote a peaceful international environment.

Huong Le Thu is a senior analyst at ASPI.

A version of this article was published on Foreign Policy.

This article was first published by ASPI on December 13, 2019.