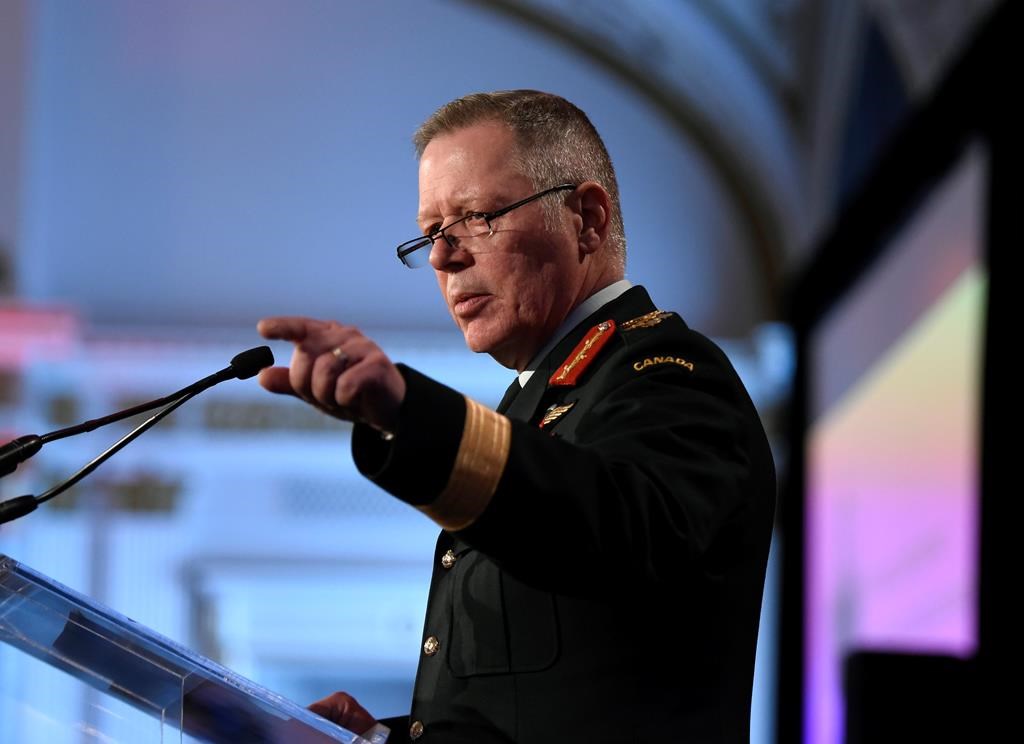 The headlines which followed from his presentation highlighted his concern with the growing capabilities of both China and Russia to disrupt Western decision making by new capabilities.

At the heart of his concerns are the capabilities of using new missiles able to operate at higher speeds to disrupt Western defenses and hamstring Western decision making in a crisis.

We’re facing more advanced conventional missiles that can be launched from further away, travel faster, and are more manoeuvrable.

Addressing these challenges requires improved capabilities for surveillance, command and control, and defeating these threats, as well as infrastructure that can continue to support operations anywhere in Canada and its approaches.

The CAF must have the capacity to help maintain our resiliency as a nation, and the right capabilities to maintain a credible deterrent posture. We have to be able to stop adversaries from contemplating the use of force in the first place.

It’s perhaps cliché, but as for deterrence, the best defence is a good offensive capability that has been communicated clearly to a potential adversary, that makes it self-evident that an aggressive act would be too costly to contemplate.

So when we look at continental defence, we have to put in place capabilities that assure Canadians of a strong deterrent posture and domestic response that they rely on.

He noted in this respect his concern with how competitors are engaged in an Arctic competition as well.

What I am increasingly concerned about is the Arctic as an avenue of approach. The Canadian Armed Forces are mandated to deter and defeat threats to North America that would travel through the Arctic waters and airspace in the years to come.

We must be able to ensure Arctic security be it a region, a place, or an avenue of approach. This requires strengthening interagency and multinational partnerships, increasing surveillance and military capabilities, and improving our ability to base, project, and sustain forces in the North.

It requires new approaches to sovereignty assurance that accounts for the very real pan-domain nature of conflict.

An interesting aspect of his presentation was to highlight the need to reshape the nature of the force in terms of skills and personnel as well to prepare for the new strategic situation.

(We need to ensure) that our people are employed within a fit-for-purpose structure that makes sense for 21st century warfare. Our structure has remained largely unchanged for decades. This isn’t to say that we are going to make changes for change sake.

For two years, the Chief of Force Development has been crunching the numbers and conducting rigorous analysis with senior commanders about what our optimal force mix and structure would look like. That work is maturing, and soon we will be in a position to start looking at changes that will make our organization more effective in the 21st century conflict arena.

As we evaluate our structure, we are also re-thinking the way that we operate.

We are adjusting our mindsets towards more comprehensive, and threat-based analysis that is focused on achieving outcomes in a highly contested pan-domain conflict space.

We are far from the days of a simple binary of war and peace. That view constrains our ability to think through the complex spectrum of activities that take place between competition and conflict.

Ultimately, all of this work will ensure that the Canadian Armed Forces continues to be a robust military institution for the people of Canada.

We will remain agile and adaptive so that we can present government with the broadest range of options to the problems that Canada will face now and into the future. 2020 has shown how quickly dynamics can change.

The remarks by Gen. Jonathan Vance, chief of the defence staff, are among the most stark and forceful delivered to date about the urgency of re-imagining decades-old continental defence systems and arrangements.

The speech comes as the Liberal government begins to grapple with how to upgrade the aerospace warning systems at North American Aerospace Defence Command (NORAD). It’s an expensive, multi-billion-dollar, multi-year proposition that was not funded as part of the country’s defence strategy.

Obviously given the serious financial constraints facing the Canadian forces to get to where the Chief of the Defence Staff sees the need to go from the current situation will be a significant challenge.

But what might be the most useful building blocks or trigger points to move in the right direction?

We shall deal with how might one shape a road map in later pieces.

The full speech can be read here: