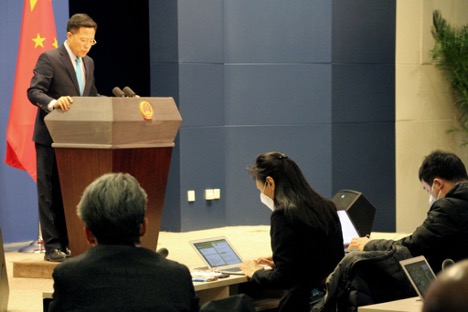 Against the backdrop of an escalating war of words between Washington and Beijing, and the Chinese Communist Party’s broader campaign to rewrite the history of the Covid-19 outbreak, the attempts by multiple Chinese diplomats to promote conspiracy theories that the virus originated in the US, not China have received widespread attention.

What has been less discussed, however, is how Western fringe and conspiracy media have been supporting these efforts and what the growing nexus between pro-CCP propaganda and conspiracy narratives may tell us about the role China is coming to play in the Western information ecosystem.

There has long been a symbiotic relationship between Russian state propaganda outlets like Sputnik and RT and certain elements of the fringe and conspiracy media in the West.

They frequently echo, borrow or seed narratives from one another. In most cases, it’s probably not deliberate collusion (at least, not on a large scale), but rather the result of opportunism and mutual benefits in singing from the same hymn sheet. And now, it appears, China may be joining the chorus.

In perhaps the most notable example of this, on 13 March a spokesperson for China’s Ministry of Foreign Affairs, Zhao Lijian, used his Twitter account to promote an article from the website globalresearch.ca, titled ‘COVID-19: Further evidence that the virus originated in the US’. The article outlines a conspiracy which claims that the novel coronavirus originated in the US, and that ‘it may therefore be true that the original source of the COVID-19 virus was the US military bio-warfare lab at Fort Detrick’.

To be clear: there is no evidence to support this claim, or to suggest that the virus originated anywhere outside China. Nonetheless, Zhao’s tweets have not only remained up but have been re-tweeted by numerous other Chinese diplomatic accounts. At the time of writing, Zhao’s tweet had received over 20,000 likes and been shared 12,700 times.

Among the many interesting issues this raises, one is the choice to promote that particular article from that particular site. There’s no shortage of conspiracy theories on the internet—so why that one?

The Centre for Research on Globalization, also known as Global Research, is a website run by Canadian economist and conspiracy theorist Michel Chossudovksy that has repeatedlybeen accused of being a pro-Kremlin mouthpiece. It’s not clear how deep the links between the site and Russian state-linked media run, but according to the independent Russian newspaper Meduza:

What makes GlobalResearch.ca different from other similar websites is the disproportional weight it enjoys in news coverage by the Russian state media.

Global Research is prominently featured as the only source in numerous stories by Russia’s leading newswire RIA Novosti, where it’s referred to as a ‘think tank’ or ‘publication’ whose ‘experts’ or ‘journalists’ regularly reveal or uncover some fact that fits into the Kremlin’s current foreign policy agenda …

[I]t is less a news outlet and more an amateur conspiracy website whose founder has subscribed to the Kremlin’s narrative simply because it opposes the one promoted by the ‘deep state’ and its subservient ‘mainstream media’.

Sites like Global Research are valuable to state-linked actors because they put a Western, pseudo-academic face on conspiracy theories and disinformation narratives. They are useful tinder to spark entire narrative cycles, as this example clearly highlights.

In the early days of the Covid-19 crisis, Global Research seems to have sensed an opportunity to reach out to new audiences. Indeed, the pivot to a Chinese audienceappears to have been so hasty that no one has yet fixed the typo in ‘Chinese’ on the site’s About page (figure 1).

Only two articles had actually been translated into Chinese before Zhao picked up Global Research’s English-language piece promoting the US-origin conspiracy theory.

Zhao’s tweet was used as the basis for news stories in Chinese state media, including the Global Times and People’s Daily Online.

It also appears to have driven a huge surge in searches for ‘globalresearch.ca’ on 13 March, the day Zhao’s tweet went out (figure 2).

What this demonstrates is that the quid pro quo—the benefit (or at least one of the benefits)—for sites like Global Research in aligning themselves with state-linked conspiracies is the enormous amplification which state-linked voices can give to pieces like this that would otherwise receive very little traffic.

Zhao’s amplification is likely to have been multiplied many times over by the widespread media coverage of his tweets, which in turn will have driven still more traffic to the Global Research site.

Not only does this help to propagate the conspiracy theory, it also provides Global Research with an incentive to lean in to the narrative.

In the 10 days since Zhao’s tweet, the site has published multiple additional articles (including republishing one from CGTN) on the US-origin conspiracy theory, some citing Zhao’s tweets.

This mutually beneficial ouroboros of conspiracy narratives passing back and forth between state-linked and fringe media already exists in the context of Kremlin-backed outlets.

If this example is anything to go by, we may well see Beijing’s state-linked information efforts follow a similar path, as China becomes a more active and aggressive player in the Western information ecosystem.