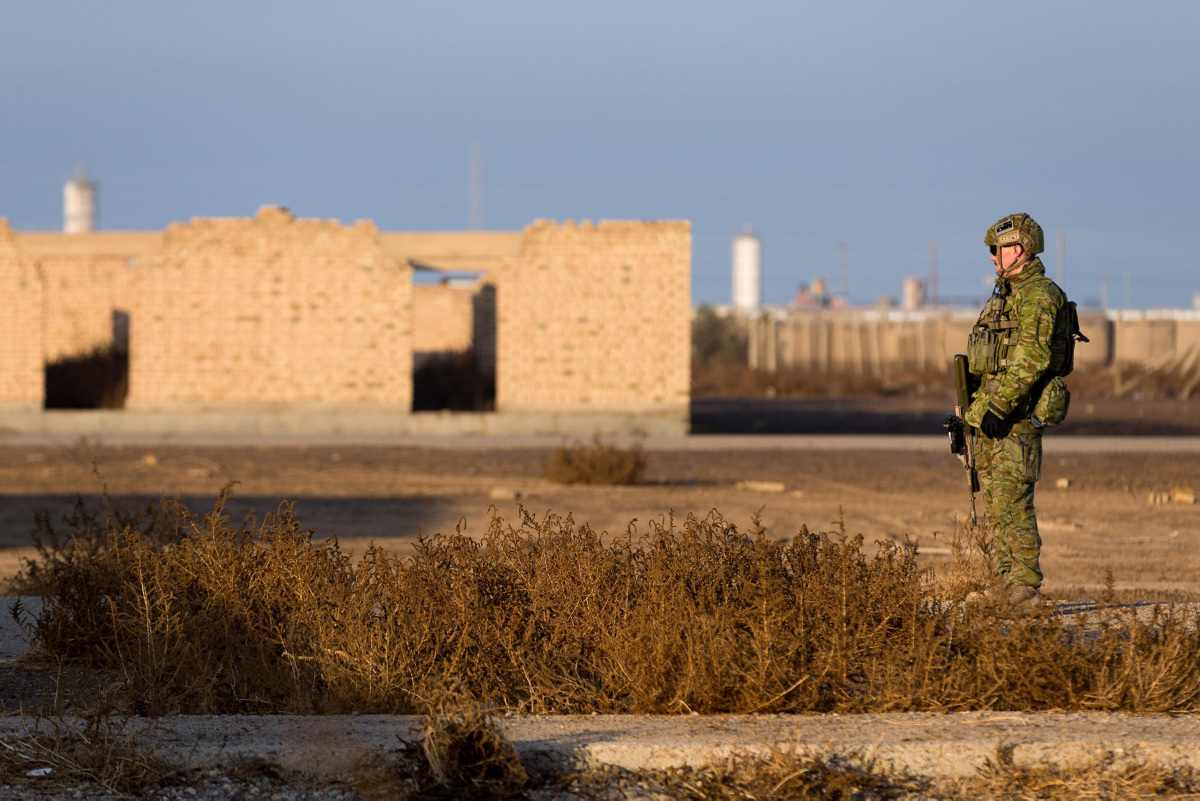 It is clear that a major challenge facing the combat forces of the United States and its allies, the challenge is to ensure that we train to the fight we will need to fight, rather than yesterday’s warfare.

Yet the challenge of understanding what is required to generate the proper training for the evolving nature of operation is a significant one.

This is the first of a five part series where Lovell looks at the way ahead for the ADF in navigating the new strategic environment.

Having experienced first-hand the wide range of competence levels, discipline and leadership effectiveness of various different nations Defence personnel, I can state unequivocally that the key to a professional and highly effective Defence Force is a quality training system.

I’m sure anyone with experience within a joint UN operation will whole heartedly agree.

The training system within the ADF is the cornerstone of the ADF’s capability, where the soldiers and officers learn their trade in order to become highly trained instruments of operational effectiveness.

The ADF has perfected many highly effective training techniques, based on our British roots serving under their command during the Boer War and WWI.

This training concept, although it gives the junior soldier and officer the basic skills of soldiering, leadership and provides a solid foundation of discipline and learning, the sheer rigidity of the training regime is contrary to the ever changing face of the modern battlespace.

I believe this favouring of a strict, doctrinal view towards the training of our Defence personnel is directly linked to various failings within the ADF’s operational effectiveness and general lack of agility.

This article discusses some of the issues I observed during my time in the ADF training command, and touches on the disparity between the conflicts we are trained for and the conflicts we faced and a look at some of the effects it has had on the ADF’s operational effectiveness over the last two decades.

What Australian Army veteran soldier doesn’t look back at their time at Kapooka with fondness and think ”… what a great time of my life, I learned so much that I used throughout my career.”

Answer, pretty much all of us!

Basic training does serve an extremely important purpose for all new recruits, in that it gives you the basic fundamentals of “how to act like a soldier.”

By the time you graduate, you will be proficient in the following important skills:

You will also be proficient in these, less important skills:

The main lesson learned in basic training is how to apply a sense of urgency, better known as “hurry up and wait.”

No matter what you were doing, where you were going or timings surrounding it, you had to do it as fast as you could.

This was probably the best thing I learned at basic training, but the down side was that you will spend the rest of your life waiting for other people (those of you who married civilians will be nodding your heads right now I’m sure).

Although basic training is essential for a well-disciplined Army, there is a fair bit of fat that could be cut out of the training program and be replaced with other, more critical training, such as:

This is where the recruits from different corps and different employment categories go their separate ways to a new training command where they are to learn their corps job. The infantry went to Singleton, Artillery and Armoured corps to Puckapunyal, Signallers to Watsonia, Engineers to Moorebank, RAEME to Bandiana and so on.

This is where we believed we would learn everything we need to know about our corps trade that we would be utilising throughout our Army careers.

Boy were we wrong.

In my experience, IET was all about achieving a minimum level of competence against an outdated training curriculum.

Get the tick in the box and out the door to your unit… don’t worry, they’ll sort you out there.

The sheer disparity between what I was trained to do vs. what was expected of me upon my first posting was immense.

A few examples are as follows:

It seemed to me that there was a generational gap between Training Command and Operational Command, where the training being received is so out of touch with the reality of day-to-day operations, that it is overwhelming and dangerous!

I would not want to go to war with anyone who hasn’t done at least a year at a unit to come up to speed.

Speaking of going to war, you would have thought, based on the operational tempo of the ADF over the last 20 years where at any one time we were involved in at least three separate conflicts around the globe, that we would have a pretty good handle on what we were training for, i.e. where we would be deployed, the local environment, the enemy picture, the type of operations we would be performing, etc.

From my experience throughout my Army career, the baseline training we all received really did not match the requirements of current operations.

Our operations were varied, from peacekeeping, mentoring and liaison to security, incident response, counter insurgency and combat support.

Each operational concept had its own complexities and required specialised training to prepare for.

The sheer range of operation types that the ADF have been involved in over the last two decades should have seen a significant shift in the focus of basic, employment and continuation training throughout the Army and wider ADF.

But from basic training right through to unit exercises, what did we all do to simulate operations?… We would “go bush”!

The basic concept all corps in the Army had for training and exercises within Australia was to deploy into a patch of Australian bushland and perform their corps roles in an attempt to simulate a wartime scenario.

A lot of emphasis is put into the environmental aspects of deploying within the bush, such as patrol spacing, cover and concealment, camouflage techniques, navigation in close bushland, setting up a harbour around trees, etc.

All techniques that would serve you well in the streets of Bagdad or caves of Oruzgân.

Recent ADF operations have primarily seen desert, urban and semi-rural combat throughout the Middle East, with nary a patch of greenery to be found.

Although it is critical to ensure that we know how to operate within our own borders in the case of invasion, we need to switch the focus of training to deal with the immediate threat facing the average 4 – 6 year soldier.

On that note, how easy do you think it is to change the training curriculum within the ADF?

Not just a slight amendment here and there, but an entire shift in concept and direction?

I would like to give an example of an experience I had in attempting to add a small change to a single IET course training package:

There is a piece of common technology used across all three branches for various purposes.

The training for the use of this device is the responsibility of one of the major Joint training establishments in Australia.

Recent developments in new technology for aircraft, ships and air defence weapon systems, has expanded the use of this device to include a complex set of new procedures to be used with this equipment.

This posed a new usage concept that required training in order to use properly and the current device user course did not include this within its curriculum.

At this time, the new technology was quickly approaching its final operational capability, yet no one throughout the ADF, outside of the program office, knew how to correctly use it.

One would think that this was the definition of an “urgent” training requirement.

Unfortunately, once we had contacted the school, we were informed that they had just finished their yearly training review and would not be accepting any change requests for another 12 months.

I believe this lack of flexibility is indicative of training command and that it has significant flow on effects into the ADF’s operational effectiveness.

I have over my career in uniform endured various survival and jungle warfare training that still has content and training objectives developed for the jungles of Vietnam!

The modern battlespace is constantly changing.

The enemy strategies shift, the environment changes, the technology improves, the tactics evolve and the political climate can be volatile and lead us into operations and conflicts we have barely begun considering (e.g. soldiers are now required to enforce local pandemic quarantines, which none have been trained to do).

Training command must become more flexible and fluid to ensure that our personnel receive the most current and relevant training the can get in order to obtain maximum operational effectiveness.

Scott is an ex-Army Soldier (Signals) and Officer (RAEME) and an Electrical, Aerospace and Systems Engineer with 20 years Defence experience.

He has a wide range of experience within the ADF, from deployed operations to major acquisition and design projects. Scott is currently working as an independent contractor on various civilian and military aerospace and infrastructure projects under his company LAESE Pty Ltd.

The featured photo: An Australian Army soldier from Task Group Taji 4 provides security for Iraqi Army training activities at Taji Military Complex, Iraq.  Australian and New Zealand soldiers are training members of the Iraqi Army to defeat the Daesh terrorist group. They are deployed on active service to Iraq as part of Task Group Taji.

The training includes weapons handling, combat first aid, building clearances and obstacle breaching techniques, as well as instruction in the tactics, techniques and procedures for squad through to company-level operations for use in the fight against Daesh.