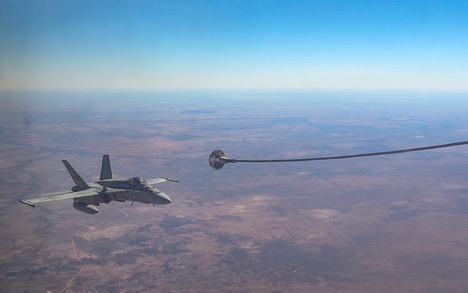 The Chinese government was likely well aware of Australia’s plans to significantly enhance the Royal Australian Air Force base at Tindal in the Northern Territory before it was announced last month. Nonetheless, the government’s decision to invest an extra $1.1 billion in Tindal, as ASPI’s Peter Jennings noted, is a ‘strategic step forward’ for Australia.

However, Chinese analysts worth their salt will have quickly realised that despite this expansion, jet fuel security remains an Achilles’ heel for northern Australia.

You don’t have to look too far into the jet-fuel supply chain to see that the government will have to deal with some very challenging issues outside RAAF Base Tindal’s perimeter fence if the full benefits of this investment are to be realised.

The ships supplying northern Australia’s jet fuel depart from Singapore and then arrive at Darwin’s port, which is currently leased to the Chinese-owned Landbridge Group. The fuel is then transferred to the Vopak Terminal Darwin, where almost all of northern Australia’s jet fuel is stored. Tindal’s fuel is then transported the 300 kilometres from Darwin to Katherine by trucks owned and operated by private companies.

For most of the year, Australia’s airlines are the biggest consumers of jet fuel in Australia’s north. The Australian Defence Force’s use of 30 million litres annually pales in comparison with the commercial sector’s consumption of 125 million litres.

It’s during major military exercises, when consumption rates rapidly rise, that the jet-fuel supply chain in northern Australia gets stretched, even though exercises are planned years in advance.

Even in peacetime, jet fuel from Singapore is subject to availability and weather conditions. Despite this vulnerability, there’s no legislated or mandated requirement for a strategic reserve of jet fuel to be held in northern Australia.

Northern Australia has only limited capacity for bulk storage of jet fuel. The storage capacity at Darwin’s Vopak facility was built on a 1996 assessment of fuel requirements.

Resupply to Tindal is limited by the availability of trucks and drivers and there are none waiting on standby just in case the ADF needs more fuel.

Defence’s answer to this problem, and the increasing fuel demands of larger aircraft, is to increase the amount of storage at Tindal. Increased jet-fuel storage would allow Defence to store enough in reserve to support short periods of high fuel consumption like those experienced during large-scale multilateral exercises such as Pitch Black.

But the decision to invest in bulk fuel storage at Tindal will bring new challenges. Jet fuel has a very limited shelf life that requires careful stock management, as well as complex testing regimes.

Defence’s approach to jet fuel in Australia’s north is underpinned by assumptions that the market will continue to ensure its availability and that there’s no requirement to invest in other fuel infrastructure or pay extra for surge capacity or reserves. However, market forces will not support the level of investment needed to develop strategic fuel infrastructure—especially if Defence isn’t willing to pay more for its fuel.

While the Tindal investment sends a clear strategic message about Australia’s commitment to national security and the US alliance, it will do little to address the broader fuel supply vulnerabilities in northern Australia. This is clearly not an issue for Defence to resolve on its own, but one that requires the federal government to think in terms of national security through nation-building.

Any discussion on supply chains and resilience, especially with respect to fuel, quickly comes down to who will cover the costs. And that’s why, in a time of increasing strategic uncertainty, the government needs to consider stepping up to make the nation-building investments in Australia’s north that are required for our national security.

The featured image credit to Australian Department of Defence.