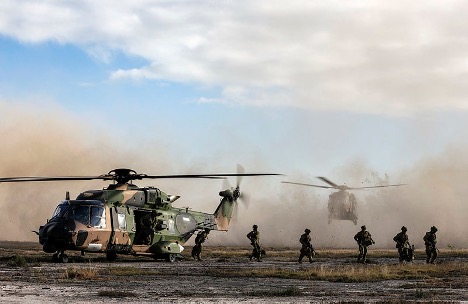 I read with interest the recent Strategist posts by John Coyne and Graeme Dunk in which they apparently took different stands on the importance of northern Australia for our defence. With better definition of how the Australian Defence Force uses its more than 100 bases, I can see the common threads of both authors’ arguments. The north and south of Australia offer unique characteristics that, taken together, serve to support the ADF’s capability to defend Australia.

Given current events and emerging tensions, understanding why ADF bases are where they are is even more critical. Defence Minister Linda Reynolds noted last October that the Defence Department was working on reassessing the strategic underpinnings of the 2016 defence white paper—not too soon.

Where the bases are and what purpose they serve are fundamental to Australia’s force posture. How the ADF is postured is key to its capability to offer the greatest range of response options to the government. Central to this range of options is the ADF’s ability to generate the right forces for any required deployment. The concepts of force generation and force deployment are the foundation of basing decisions. The ADF has home bases, mounting bases and bare bases, all of which serve specific purposes.

Home bases are used for force generation and maintaining preparedness. Bare bases are activated, and mounting bases are established for specific operations and contingencies. The ADF needs the right mix of types and locations of bases to achieve the greatest flexibility to be successful in the widest range of operations.

Decisions on home basing locations are significantly influenced by sunk costs, the cost of ownership of expensive platforms and the retention of ADF personnel. They involve significant infrastructure optimised to produce the best-prepared forces for contribution to the joint force for deployment. They are also generally single-service bases to enable maximum stability of location for ADF families and engagement of local industry.  Decisions to change home basing locations are significant, with long lead times and high costs. This force generation responsibility is the primary concern of the service chiefs. Force generation involves keeping all elements of the ADF well prepared.

A mounting base is chosen for a specific offshore operation as the most suitable place on Australian soil from which to mount a force. It is generally an expansion of a suitable home base. A mounting base will not typically have all the force elements required for a specific operation given the joint requirements of most missions. It provides a place to assemble force elements from home bases around Australia to form a joint taskforce.

The function of a mounting base is to receive and integrate a joint team. Once the team is assembled, the mounting base is used to prepare and rehearse the integrated force for likely tasks, and then deploy the force into the designated area of operations. The operations to which they might deploy range from disaster recovery, evacuation or humanitarian relief through to combat.

The characteristics that influence the suitability of locations in Australia for home bases and mounting bases are different. A home base requires liveability and lifestyle for families, defence industry support for cost-effective maintenance of platforms and equipment, and infrastructure to optimise training. Home bases for the navy and air force need to be situated where personnel can access the skills and services to support their platforms and equipment. There are lots of these in the southern parts of the country.

A mounting base, on the other hand, is selected based on proximity to potential operations. Considerations include operational security; accessibility by road, rail, sea and air; and sufficiency of infrastructure and logistics to support mounting, deployment and generally sustainment of the force.

The Australian Army’s three combat brigades are on home bases that have ready access to large and suitable field training areas. There are lots of these in the north. They also happen to, most often, offer the best mounting bases.

Utilisation of the optimal mix of home, mounting and bare bases is what enables the ADF to offer the greatest flexibility in providing effective response options to government. Mounting bases are identified as needed, based on the type and location of an intended operation and the preparation and integration needs of the mounting force. If the joint taskforce has significant land force elements, then the mounting bases are typically in northern Australia.

Both Coyne and Dunk make some good points, and the way each of them describes the problem provides important insights. What is clear is that southern Australia is key to successful force generation, particularly for the air force and navy, and northern Australia is key to successfully mounting and deploying joint forces. A useful discussion would centre on how all levels of government and business can work together to optimise national security and best support ADF capability.

John Caligari retired as a lieutenant general after serving for more than 36 years in the Australian Army and now works as a strategic adviser.