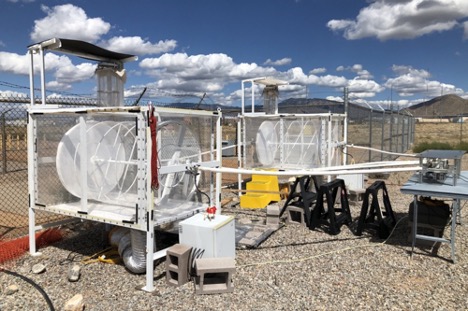 A biological threat agent explodes out of a metal tube and travels toward a formation of warfighters. Thousands of aerosolized agents speed through the air. While some agents infect warfighters, others remain in transport or slam into rocks, trees, and the ground. Aerosolized agents that linger in the open-air environment, before decontamination efforts begin or even during that time when they are in transport, will age and decay. Until recently, because of challenges posed by outdoor testing of live biological threat agents, scientists empirically assumed that agents aged and decayed at similar rates indoors and outdoors.

Yet laboratory measurements may not accurately predict — and even underestimate — the decomposition of agents released in the open air.

The research was performed at the Sandia National Laboratory, National Strategic Research Institute, and the Army Research Laboratory. Researchers evaluated the combination of open-air factors that most affect the rate of agent decay. They also compared data collected in laboratory studies to data collected in outdoor experiments.

The experiment took place in two locations: Albuquerque, New Mexico, and Houston, Texas. Houston has oil refineries, so it has many more air pollutants than Albuquerque does, which means that the differing air in the two cities offers differing volatile organic carbon (pollutant) levels that can interact with aerosolized biological agents. In both cities, researchers quantified how components of the atmosphere — ozone, ultraviolet light, and pollutants — would affect an agent’s nucleic acids, surface protein chemistry, infectivity, detectability, and viability.

For outdoor testing, researchers contained the simulants representing biological threat agents within the rotating drum chambers of CAGES, thereby exposing the simulants to the ambient atmosphere in which light intensity and gas composition mirror that of the surrounding air. After exposing the simulants to different atmospheric conditions, aerosol samples were taken from the chambers to study the physical and chemical properties of the aerosol that was contained. For the laboratory tests, researchers conducted indoor aerosol testing that mimicked real-world, aging conditions (including humidity, simulated solar light, ozone, and pollutants) to explore the degree to which outdoor decay data may be comparable to indoor decay data.

The experiments revealed that in open air, simulants decayed 10 to 1,000 times faster in CAGES chambers than in laboratory settings. These data indicate that laboratory tests underestimate the rate of agent decay that occurs outdoors, and on their own, laboratory tests are not sufficient in understanding the decay process outdoors. This finding has implications for decision makers, such as in guiding agent detection and hazard mitigation efforts, decontamination efforts, promoting warfighter health in a contaminated space, and informing mission requirements.

With better data, DTRA CB can better detect and predict agent transport and persistence over time. Improved, fundamental knowledge of agent decay provides more accurate data to the modeling community, and ultimately, to the warfighter who needs to operate in a contaminated environment

This story was published by the US Department of Defense on July 20, 2020.