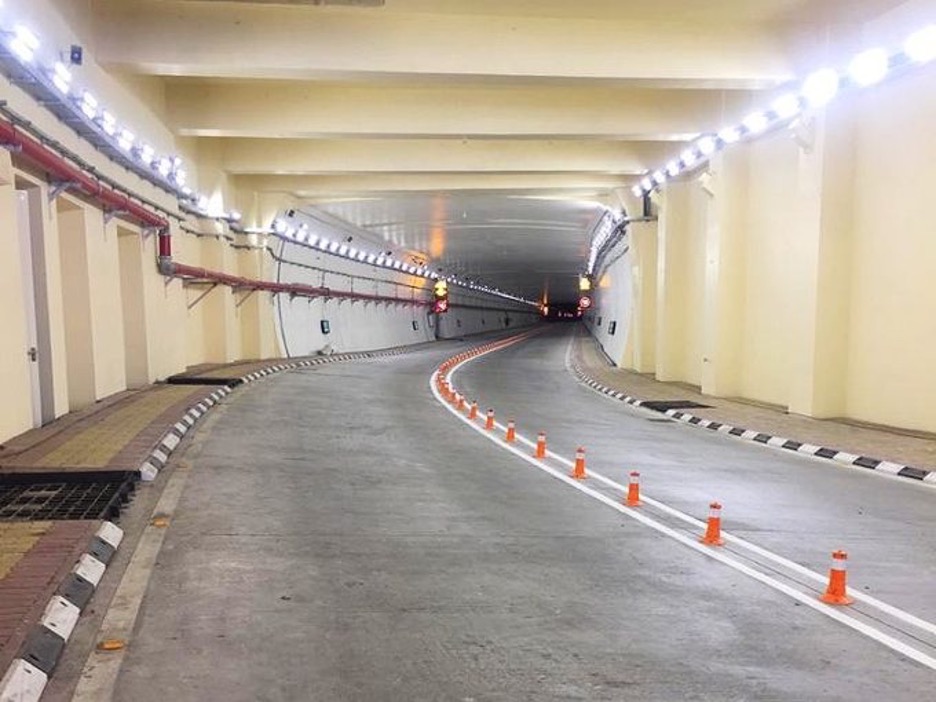 “Atal tunnel will give new strength to India’s border infrastructure. It is an example of world-class border connectivity. There have been demands to improve border infrastructure but for a long time, such projects either couldn’t get out of planning stage or got stuck midway,” Modi said, adding: “One of our top priorities is to strengthen the international border on all sides.”

“Greater connectivity means more rapid development. Especially in the border areas, connectivity is directly related to the country’s defense needs,” Modi said, adding: “A very difficult resolution has been fulfilled today by piercing the impenetrable Pir Panjal. Today I pay my respectful greetings to the hard working men who risk their lives, engineers, all working brothers and sisters in this Mahayagya (among the pledges for nation building).”

The Atal Tunnel, the Prime Minister said, was “living proof of world-class border connectivity. Be it part of the Himalayas, the expansion of deserts in Western India or the coastal areas of South and East India, they are huge resources both for the security and prosperity of the country. There has always been a demand to improve the infrastructure here due to the balanced and complete development of these areas”.

Noting that with the tunnel the distance between Manali and Keylong will be considerably reduced, Modi said: “My siblings of the mountain can understand what it means to reduce the distance…on the mountains.”

Farmers, gardeners and the youth of Leh-Ladakh “will now have easy access to the capital of Delhi and other markets. Their risk will also be reduced. Not only this, this tunnel is also strengthening the connection between Himachal and Buddha tradition which has left India and is showing a new path, new light to the whole world. Many congratulations to Himachal and all the colleagues of Leh-Ladakh for this”.

Modi also traveled in the tunnel from the South Portal to the North Portal and also visited the emergency egress tunnel that was built into the main tunnel itself. He also witnessed a pictorial exhibition on “The Making of Atal Tunnel” on the occasion.

At present, the Manali-Leh Highway, is one of only two routes to Ladakh for the movement of civilian traffic and military supplies to the Line of Actual Control (LAC) with China as also the Siachen Glacier but is motorable for only four months a year due to heavy snowfall.

Even when the road was open, it required a tortuous 117-km journey from Manali to Keylong on the other side of Rohtang Pass that usually took about five to six hours, not counting the long hours of traffic gridlocks. This has now been reduced by 46 km and can be completed in 30 minutes with the tunnel permitting speeds of up to 80 km an hour.

The other route is through the Zoji Lah on the Srinagar-Drass-Leh Highway that also gets blocked by snow for nearly four months in a year. Construction of a 14 km long tunnel under Zoji La has also been planned.

At 3,100 metres, the single tube 10-metre-wide double-carriageway Atal Tunnel, named after former Prime Minister Atal Bihari Vajpayee, incorporates a host of safety features and is expected to daily cater to some 3,000 cars and 1,500 trucks, including transporters of heavy tanks like the T-90. It has been built over a 10 year period at a cost of Rs. 4,000 crore ($300 million).

Vehicular management and checking pollution is a priority. For this, there is a telephone facility at every 150 metres, emergency exits every 500 metres and turning caverns every 2.2 km.

CCTV cameras have been placed every 250 metres and will be connected to two monitoring rooms on both ends of the tunnel. Sensors to check the pollution level will keep on updating data and if the record is above the desired level, the quantity of fresh air injected inside the tunnel – through two heavy duty fans each on both openings – would be increased. Pollution level will be controlled within 90 seconds.

The tunnel has a semi-transverse ventilation system, where large fans would separately circulate air throughout the tunnel length. Another safety feature is that if a fire were to erupt inside the tunnel, it will be controlled within an area of 200 metres and fire hydrants will be provided on specific locations.

The tunnel also has a public announcement system to make important announcements in emergency situations for which loudspeakers have been installed at regular distances.

The Border Roads Organisation (BRO), a tri-service organisation of the Defence Ministry specialising in road and bridge construction in difficult terrain, was put in charge of construction.Work on the tunnel was awarded in September 2009 to a joint venture of Afcons Infrastructure Limited, an Indian construction company of Shapoorji Pallonji Group and Austria’s Strabag AG. Drilling began on June 28, 2010 at the South Portal, 30 km north of Manali.

The latest Austrian tunnelling method and ventilation system – semi transverse type considered as safest – has been adopted for the project. Heavy snowfall in the Rohtang Pass area is a major concern, especially on the approach roads to the tunnel and avalanche-control structures have been constructed to prevent damage to the roads and to ensure the safety of the roads and tunnel users alike.

The most challenging task was to continue the excavation during heavy snowfall in winter. Excavation for tunnelling was done from both ends. However, as Rohtang Pass closes during the winter, the north portal was not accessible during winter and the excavation was being done only from the south portal in winter. Only about one-fourth of the entire tunnel was excavated from the north end and three-fourths from the south end. There were more than 46 avalanche sites on approaches to the tunnel.

Other challenges to the progress of the tunnel included difficulties in disposing more than 800,000 m³ of excavated rock and soil, heavy ingress of water (as much as 3 million litres per day in June 2012) that required constant dewatering – that slowed the progress of excavation from 5-metres per day to just half a metre a day – and unstable rocks that slowed blasting and digging. A cloud-burst and flash flood on August 8 2003 killed 42 labourers who were building the temporary access road. Questions were also raised on the impact of cutting down more than 700 trees on the ecology but these were found to outweigh the benefits of the tunnel.

On November 22, 2017, patients were allowed to be carried through the under-construction tunnel only in the gravest of emergency when the helicopter service was not available and not to allow civilians to enter the tunnel before completion due to risks of falling rocks, lack of oxygen in the tunnel as ventilation system was yet to be installed and likely interruption in construction work due to presence of civilians.

The trial run of a bus service started through the yet-incomplete tunnel on November 17, 2019. A Himachal Road Transport Corporation bus carrying 44 passengers entered tunnel from the south portal and the passengers alighted at the north portal. The bus ran once a day over the next five winter months till the Rohtang Pass opened.

This article was published by India Strategic on October 3, 2020.