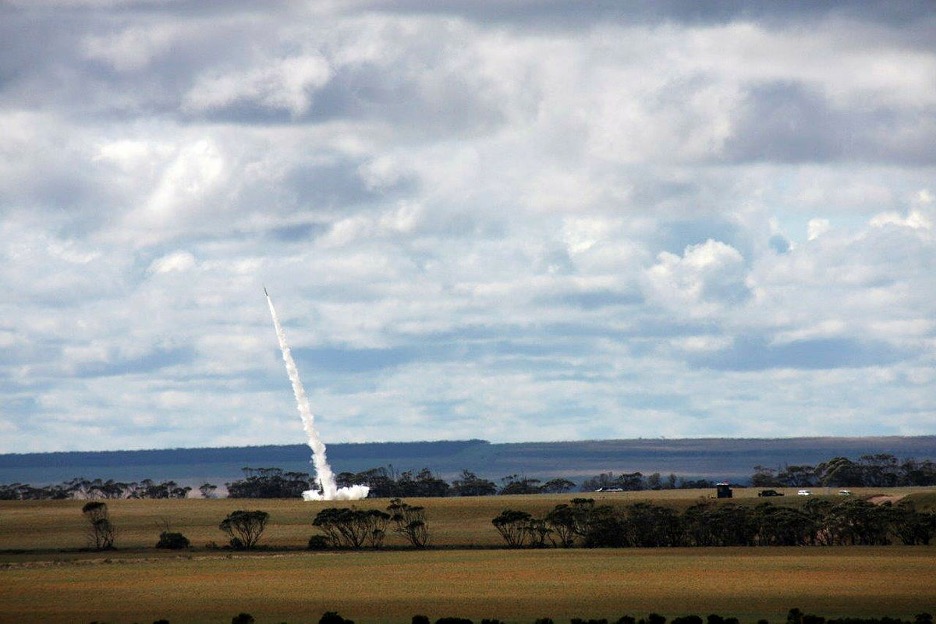 The back-to-back from the Koonibba Test Range, near Ceduna, were important not only in demonstrating the potential for launching payloads into ‘near space’ with a sub-orbital trajectory, but also in laying the basis for a future orbital launch site operated by Southern Launch, at Whalers Way, near Port Lincoln.

This activity is occurring as other companies are looking to establish launch sites around Australia. Equatorial Launch Australia is establishing the Arnhem Space Centre at Nhulunbuy, near Gove in the Northern Territory, and there’s a push for a third launch site at Abbott Point, near Bowen in Queensland.

Gilmour Space Technology and Black Sky Aerospace are two leading contenders for producing the first Australian rockets suitable for orbital missions. Gilmour has a contract signed for a 2022 launch of an Australian satellite on its Eris rocket from an Australian launch site.

The Whalers Way site is optimal for deploying satellites into high-inclination (polar or sun-synchronous) orbits, with rockets flying out over the Great Australian Bight.

These orbits are ideal for intelligence, surveillance and reconnaissance tasks, such as those that would form the core of the Defence Department’s project for a sovereign space-based ISR capability (DEF-799 Phase 2).

The ‘orbitology’ is important to understand.

Satellites placed in these orbits offer global coverage because they orbit the earth from pole to pole, while the earth rotates from east to west.

That means that a satellite in a high-inclination polar orbit, particularly if it’s in a sun-synchronous orbit, will pass over the same location at the same time each day.

Because satellites take 90 minutes to make one orbit, a constellation of several satellites deployed in such an orbit would ensure constant space-based surveillance of key focal areas relevant to Australia’s defence and national security.

At Southern Launch’s Whalers Way site, a launch vehicle such as Gilmour’s Eris could deploy a 215-kilogram payload into a 500-kilometre sun-synchronous orbit.

Australian commercial satellite developers could produce a small satellite constellation for ISR purposes and deploy it via a series of Eris III launches from Whalers Way into a polar sun-synchronous orbit.

That would give us a locally developed and sovereign-controlled space-based ISR capability suitable to provide the low-end component of a high–low mix for DEF-799 Phase 2.

Other satellites in higher orbits could be developed or acquired for the high-end element of the capability.

For example, the trajectory for a launch from Whalers Way into a polar sun-synchronous orbit would enable a constellation of satellites to fly over key areas such as the South China Sea on a regular basis.

They would provide near-constant surveillance of activities, including allowing monitoring of changes in activity and of deployments of military forces.

The Southern Launch site at Whalers Way is geographically secure and highly accessible to local infrastructure, including port and airport facilities at Port Lincoln. The low amount of air and maritime traffic over the Great Australian Bight means that range safety issues are reduced, permitting a greater number of launches than other locations.

The emphasis of Southern Launch is on small satellite launches, which is ideal for fast and responsive space access.

Establishing a rapid cadence for launches will be important. Sticking with a traditional approach of depending on foreign launch providers means that Australian satellites have to wait their turn in the queue, and there’s no guarantee of a quick transition to the launch pad.

Even in peacetime, Defence could have to wait months or even years for a single satellite to be launched. In wartime, or in a pre-war period, and if we depend on US launch providers, it’s likely US payloads would take priority and Australian satellites would be bumped further back in the queue.

With this in mind, it’s important for the Australian Defence Force to have rapid and responsive sovereign access to space.

A local space launch capability, such as that being offered by Southern Launch and other companies, opens up a much better option of Australian satellites being launched on Australian launch vehicles from Australian launch sites on an as-needed basis. It also allows us to burden-share with allies, launching their urgent payloads as needed. We can contribute more as an alliance partner.

The ability to generate a rapid launch cadence will allow us to reconstitute any lost space capability must faster than if we remained dependent on foreign launch providers. Losing priority in a launch queue, even as our satellites are lost, means we accept quick degradation of Defence’s space capability from the outset of a conflict, with a commensurate decline in operational capability.

Yet we don’t have to accept an operationally limited space domain.

Australian commercial space companies can support Defence through digital development and manufacture of small satellites that can be then launched quickly as needed on Australian rockets.

With the U.S. now considering how to apply digital development and fourth industrial revolution technologies to satellite manufacturing, adopting a rapid production line approach to space capability in order to build space resilience is an idea whose time has come.