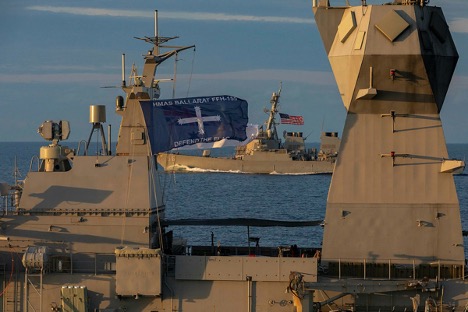 Here are some positive outcomes from the Chinese Communist Party’s descent into North Korean–style insult and abuse: Australians get to see firsthand the entity we are dealing with, and Beijing’s collection of local useful idiots are tested to see how far they will defend the indefensible behaviour of their patron.

Leaders in New Zealand, the United Kingdom, the United States, Taiwan and elsewhere have supported Australia unbidden. They realise that the communist party’s treatment of Australia will be meted out to them if, like us, they refuse to accept a silenced, subordinate status.

There is now a consensus that Australia must diversify its trade markets, a view shared by many exporters who are reassessing the risk of doing business with China. Even a year ago, that reality was rejected by many.

Prime Minister Scott Morrison saw that a line had been crossed, necessitating a strong response. That nixes a disposition of many Canberra mandarins that masterful inactivity and saying nothing is somehow a clever way to deal with Beijing.

Decades of diplomatic nuance in our China relationship have delivered nothing. Saying what is authentically Australian and defending our national values might just work.

There will be senior communist party officials viewing the arrival of ‘wolf warrior’ diplomacy as a disaster for China’s position in the world.

Over the last year we have seen some remarkable leaks from China, exposing document troves about the mistreatment of ethnic minorities and the botched early response to Covid-19. There are many in China appalled at the party’s behaviour.

Regrettably, Beijing is not about to change direction. Our government knows that and so does the opposition. Australia is well placed to drive a coherent, bipartisan response to China’s bullying and is likely to get popular support and international backing for it.

Can China be peacefully persuaded to behave as a responsible member of the global community? The government’s July defence strategic update tactfully says that conventional war ‘while still unlikely, is less remote than in the past’. The strategy unveiled a major new effort to increase the range and hitting power of the Australian Defence Force.

On Tuesday, Defence Minister Linda Reynolds announced Australia has agreed with the United States to develop and test a ‘hypersonic cruise missile prototype’.

On any day not dominated by China’s foreign ministry tweeting a fake image of an Australian soldier slitting a child’s throat, the announcement would have received more attention.

Hypersonic cruise missiles fly at speeds above Mach 5—that is, five times the speed of sound. Air-breathing cruise missiles, which fly like aircraft, have been tested to speeds of Mach 9.6. Russia, China and the United States want to field these weapons, and quickly.

The speed of these weapons means they have vast ranges. As Reynolds said, hypersonic missiles are potentially a game-changer, adding more deterrence weight to our defence force and ensuring that an adversary will have to deal with that risk thousands of kilometres from our shores.

The force structure plan released alongside the defence strategic update allocated $9.3 billion to ‘high-speed long-range strike and missile defence’. It is a fundamental reset to Australian defence thinking and central to it is a joint effort with the United States.

Our biggest strategic challenge is to do everything we can to keep America active in the Indo-Pacific and the Chinese military as far away from us as possible. That means keeping the alliance active and future-focused.

Australian researchers have been working on hypersonic vehicles for 15 years. Canberra and Washington should fast-track this collaboration. The right question to ask is what can be delivered in two to five years, not in a decade.

People can be a bit squeamish when it comes to talking about weapons development. Surely one lesson from the Brereton investigation into the special forces is that we need to be clear-sighted about what we are doing. Defence is not there for parades.

Potentially linked to the hypersonic cruise missile plan is the idea that Australia will look to domestically produce ‘complex munitions’—code for missiles.

The fastest way to do that would be to team with a US or possibly a European manufacturer. The lesson from Covid-19 is that we need to make our military supply chains more secure. In modern conflict the first item to fall into short supply (after trained people) is missiles. The government needs to look at radical options to get things moving quickly rather than plod through a decade’s worth of development and procurement.

There are two footnotes to add: first, there is a view that China thinks Australia is acquiring the wrong defence equipment and that Chinese (and indeed Russian) aircraft are superior.

This is wrong. I have met quite a number of People’s Liberation Army generals over the years. They envy the military capability we extract from the US alliance and a force of 90,000 regulars and reserves. If China didn’t rate our military, their officials wouldn’t so relentlessly demand that we abandon the US alliance.

Chinese combat aircraft are improving but suffer from critical capability deficiencies in engine and stealth technology, among others, and are no match yet for the F-35 joint strike fighter and the linked systems of the wider ADF. This is one reason Beijing so actively spies on our Defence and industry base.

Footnote two: Last financial year ASPI received 3% of its funding from the Australian defence industry. Some of our critics seem as opposed to a strong Australian military as much as they are prepared to forgive Beijing’s aggressive posturing. The funding has no impact on our analysis any more than substantial Defence and industry funding does to most of Australia’s universities.

ASPI would have no value to government, parliament or Defence if it did not provide a strong element of policy contestability.

One test of credibility is that shutting ASPI down is demand number 10 on the Chinese embassy’s 14-point grievance list. The truth hurts the Chinese Communist Party. In these difficult times, independently minded policy research matters now more than ever.

Peter Jennings is the executive director of ASPI and a former deputy secretary for strategy in the Department of Defence. A version of this article was published in The Australian.

This article was published by ASPI on December 3, 2020.