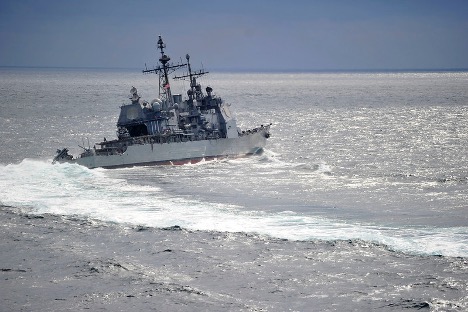 The most often quoted line of the ancient Chinese strategist Sun Tzu is that ‘supreme excellence consists in breaking the enemy’s resistance without fighting’.

By that measure, the Chinese Communist Party and the People’s Liberation Army have shown themselves to be excellent by winning a bloodless battle with the US.

China’s anti-access/area-denial strategy has already broken the US’s willingness to operate close to China’s coast in a conflict.

It won that first battle through asymmetric means when it couldn’t match the US military in conventional might.

Now it appears China is moving to win a second bloodless battle by using its industrial strength to outbuild the US Navy in conventional military power and push the US further away from the western Pacific and its allies there.

The goal of these two battles is to win a bloodless war by making the cost to the US of intervening to counter an invasion of Taiwan too high.

The Chinese strategy has put the US military in a bind, perhaps best illustrated by the US Navy’s struggles to develop an achievable force structure that can deter or defeat Chinese ambitions at an acceptable cost in treasure and, if necessary, blood.

US presidents, congresspeople and the navy have held a view that 355 ships was the magic number. It’s debatable in world of growing Chinese power and evolving technology whether that was the right number, but the reality was the navy couldn’t have gotten there anyway. The cost of new ships has spiralled upwards, driven by the need for the sort of exquisitely complex, multirole vessels that can defeat the broadening range of threats posed by Chinese systems. Independent analysis indicated that achieving the 355 goal would require around 60% more spending on shipbuilding than the US had averaged. Consequently, ship numbers fell as the retirement of old vessels outran the launch of new ones, reaching a low of around 280.

Failed attempts to break out of the cycle, either by deploying advanced new technologies, in the case of the Zumwalt destroyer, or by building cheaper ships, in the case of the littoral combat ship, only exacerbated the problem by siphoning resources away from other programs in return for little or no useful capability. Moreover, they destroyed the navy’s credibility with Congress. The result was that the navy was losing capabilities such as vertical launch cells, a key metric of naval power, much faster than it could replace them.

Other ways to break out of the cycle are being explored, but so far remain largely conceptual.

Whether under the name of mosaic warfare, distributed lethality or some other term, they involve disaggregating capabilities such as weapons, sensors, processing power and communications systems into smaller vessels and vehicles, some manned, some unmanned.

The individual components would be cheaper, but when linked into a resilient network or mesh enabled by artificial intelligence, together they would provide greater, more responsive lethality while being able to suffer attrition.

Such concepts have made some progress towards reality, but overall have struggled to gain traction.

The Report to Congress on the annual long-range plan for construction of naval vessels released by the Office of Secretary of Defense on 9 December reveals the tension at play between these factors. While the report was released after Secretary of Defense Mark Esper was ‘terminated’ by President Donald Trump, it was developed on his watch after he rejected the navy’s previous attempts to develop a viable force structure and a plan to get there.

Crucially, the report doesn’t yield the battlefield to China; it is focused on reasserting the US’s warfighting advantage against China (and Russia). To do so, it breaks out of the shackles of the 355-ship formula. Strikingly, it does this by planning for more ships—around 400 manned vessels teaming with around 140 unmanned.

These aren’t small ships—the small surface combatant will be Fincantieri’s FREMM frigate, which was one of the contenders in Australia’s future-frigate competition. They will be a lot more capable than the littoral combat ships but will have significantly fewer vertical-launch cells than the Ticonderoga-class cruisers that are retiring (and whose replacement is still undecided). The plan also includes the smaller amphibious ships sought by the commandant of the US Marine Corps to allow his forces to operate within range of China’s A2/AD capabilities.

Yet this is far from a wholesale move to mosaic warfare.

For one, the plan is still committed to large numbers of extremely expensive manned platforms. In addition to the 74 large surface combatants, it maintains 10 or 11 aircraft carriers, plus it increases the number of nuclear attack submarines—one key area where the US still has a substantial technological advantage over China—from 52 to 80.

The navy’s commitment to unmanned systems, meanwhile, seems a little wobbly. While the plan envisages acquiring eight Orca extra-large unmanned underwater vessels over the next five years, things are not so rosy for unmanned surface vessels (USVs).

The navy had been pressing ahead with two unmanned surface ship classes that it is already testing with the fleet at sea: the Sea Hunter medium USV, which was to act as a sensor platform; and a large USV, which would act as an ‘adjunct fires magazine’, that is, a cheap way to get more launch cells to sea.

But while the plan states that ‘significant resources are added to accelerate fielding the full spectrum of unmanned capabilities’, it foresees acquiring only one medium USV over the next five years. And while the plan sought 12 large USVs, a sceptical Congress has intervened, questioning whether the technologies and concepts for their use are sufficiently mature. It wants the navy to explore other affordable ways to get launch cells to sea before committing to an unmanned solution.

The biggest flaw in the plan is that it still hasn’t cracked the nut of affordability.

The reduction in large surface combatants is nowhere near enough to offset the additions. The 2021 budget assigned US$20.3 billion to shipbuilding, growing to US$28.2 billion in 2026. Under the new plan, it grows to US$38.4 billion. That’s 89% more than now, and 36% more than the old plan envisaged for 2026. Across the next five years it’s a US$38.8 billion increase over the current plan. And that’s before those numbers are scrutinised by agencies such as the Congressional Budget Office.

The accompanying fiscal planning framework identifies US$45 billion in funding that can be redirected to shipbuilding, but those funds can only be described as illusory: US$35 billion is ‘savings’ in operations funding to be realised by ‘getting the US out of endless wars’.

But even if President Joe Biden stops those operations, it’s unlikely that Congress would still appropriate the same level of funding but redirect it to shipbuilding. Other savings come at the expense of the army, which won’t go down without a fight. Meanwhile, the air force is facing exactly the same problem of ageing platforms and massive recapitalisation shortfalls as the navy—and its fighter and bomber programs also have constituencies in Congress.

It may appear to be academic to analyse a shipbuilding plan in the week after the administration that published it left office.

But the Biden administration faces the same thorny issues.

Simply seeking to outbuild China doesn’t seem to be viable, particularly if it requires massive increases in funding, which likely isn’t a high priority for the new administration. Yet turning mosaic warfighting concepts into an affordable reality will take time, something the US’s ageing fleet doesn’t necessarily have.

If the key threat is the growing Chinese navy, then effective, timely responses will require moving beyond focusing on ships to be built in future decades to planning for joint responses drawing on all US assets.

The US Marine Corps’ reconceptualisation of itself as a ship-killing force is one hint towards a different way of thinking.

Resuscitating the US Air Force’s bomber fleet’s role as ship-killers is another.

Even the US Army can play a role here with its own long-range strike platforms. And that’s before we think about the role the US’s coalition of allies can play.