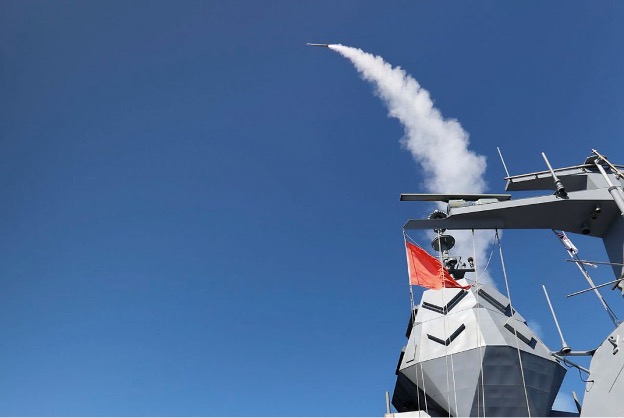 Its focus was the navy’s weapons program.

There were also mentions of the ‘early development of advanced guided weapons’ and ‘opportunities to broaden Australia’s weapons manufacturing base’.

One might be forgiven for thinking that the government had agreed to design and manufacture a range of highly capable maritime weapons here in Australia.

So, what’s really going on?

Let’s start with the numbers. A couple of figures in the announcement are straightforward.

The $75 billion is the 2020 force structure plan’s figure (page 35) for acquisition and sustainment spending on new maritime capability over the next decade. The $183 billion is the number that the government and the Defence Department are now using for the cost of the naval shipbuilding program. That’s swelled from the original $89 billion due to the addition of new projects as well as substantial adjustments to the costs attributed publicly to the future submarine and future frigate programs.

According to Tony Dalton, Defence’s deputy secretary for naval shipbuilding, speaking at the Australian Defence Magazine’s recent annual congress, an updated naval shipbuilding and sustainment plan will soon be released with more detail on what makes up that $183 billion.

As a side note, Dalton recently stated that even very large ships such as the future logistics and replenishment ships will be built in Australia at the Henderson shipyard.

The integrated investment program that accompanied the 2016 defence white paper had a number of funding lines for maritime guided weapons, including:

They were replaced in the 2020 force structure plan by a single line called ‘maritime guided weapons’ listed at $16.1–24.2 billion of planned expenditure over the next two decades (page 45)—that is, roughly about the same as what was there before. Nevertheless, it’s still a big number.

Those individual projects have now been rolled into one overarching program called SEA 1300. In a world where guided weapons are fundamental to warfighting, the cost of getting the selection, integration, delivery and sustainment of weapons wrong could be catastrophic, so that kind of coordinated approach to weapons is exactly what is needed.

But the media release didn’t have much detail on how the acquisition of individual weapons in the SEA 1300 program is progressing. Defence provided us with clarifications, stating that the government has recently provided:

– First Pass approval to participate in an armaments cooperative program with the USN to develop the Mk 54 Mod 2 advanced lightweight torpedo; and

In lay terms, ‘first pass’ means approval to fund development work, including the all-important work needed to integrate the weapons into our ships and their combat systems. Second pass is normally approval to acquire warstocks of the weapons themselves. The $1 billion in the announcement covers the next stage of project development work for those weapons; it doesn’t acquire any actual weapons.

Let’s look at those individual activities.

Australia has already contributed hundreds of millions to the US-led international consortium developing the ESSM Block II, a very capable short-range air-defence missile that will replace the older version of the ESSM on the Anzac-class frigates and Hobart-class destroyers and also be employed on the Hunter-class frigates. ‘Interim pass’ keeps that participation going along with integration work. According to Defence, it will seek approval to acquire missiles once the weapon achieves final certification.

Since the Anzac frigates can’t employ the longer-range SM-2 or SM-6 missiles, giving them the most capable version of the ESSM is vital to ensuring their relevance, considering the last ships in the class are likely to be in service into the 2040s.

Participation in the SM-6 Block I and SM-2 Block IIIC programs is also a good thing, particularly since the SM-6 provides protection against anti-ship ballistic missiles.

But an in-service capability is some way off: the Hobert-class air warfare destroyers require a planned substantial upgrade to their radars and combat system to be completed (probably in the second half of the decade) before they can employ the SM-6. The navy’s stocks of SM-2 missiles have already been upgraded for use on the air warfare destroyers, but many more missiles will be needed for the future frigate fleet, plus capability upgrades will be necessary to meet evolving threats.

Approval to participate in a cooperative program to develop the Mark 54 lightweight anti-submarine torpedo is also a good thing.

The navy and air force already use the Mk 54 on the Seahawk Romeo helicopter and P-8A maritime patrol aircraft, respectively, so the program will ensure ongoing upgrades to the weapon, just as the navy’s long-standing participation in a cooperative program with the US for the Mk 48 heavyweight torpedo has provided access to a steadily evolving capability for our submarines. The decision likely sounds the eventual death knell for the MU90 lightweight torpedo currently used by the navy’s surface vessels. It makes little sense for ships to continue to carry two different kinds of torpedos: the MU90 launched by the ship itself and the Mk 54 by its helicopter.

The force structure plan contains a roughly $1 billion line to develop domestic guided weapons production—but that’s not the same $1 billion as the one referred to in the minister’s announcement. While the media release’s reference to ‘opportunities to broaden Australia’s weapons manufacturing base, reinforcing this Government’s long-term commitment to Australian industry and delivering sovereign industrial capabilities’ might suggest some progress towards domestic manufacture, the government doesn’t appear to have made any decisions yet about which weapons or how they would be produced.

As anti-ship threats proliferate, protecting ships is becoming increasingly challenging. The combination of the ESSM, SM-2 and SM-6 will give our fleet some chance of defeating the combination of supersonic cruise missiles and anti-ship ballistic missiles being deployed in our region. Whether they can defeat the emerging threat posed by hypersonic weapons is another question. However, defending ships is an extremely expensive task; if we assume the figures in the 2016 investment plan are still broadly correct, then we’re moving further down a path towards acquisition of around $10 billion in air-defence missiles.

But remember that the 2020 defence strategic update assessed that ‘maintaining what is a capable, but largely defensive, force in the medium to long term will not best equip the ADF to deter attacks against Australia or its interests’.

The government said that the ADF needed to grow ‘its self-reliant ability to deliver deterrent effects … including capabilities to hold adversary forces and infrastructure at risk further from Australia, such as longer-range strike weapons, cyber capabilities and area denial systems’.

So far, it appears the government hasn’t yet made any firm decisions on longer-range strike or area-denial weapons for the fleet.

The former sounds something like LRASM (long range, precision-guided anti-ship missile), which is already being acquired for the air force’s Super Hornets and will be integrated onto the P-8A maritime patrol aircraft.

Replacement of the ageing Harpoon missiles used on the navy’s ships is sorely needed to reclaim some of the capability advantages ceded to Chinese anti-ship weapons, but again we don’t appear to have reached a second-pass decision.

Acquisition of LRASM for the fleet would be a good thing, but an anti-ship missile is hardly a new kind of capability for our defence force.

What would be new is a maritime land-strike missile.

One with a range of 1,500 kilometres sounds suspiciously like the Tomahawk land attack missile, perhaps the best-known weapon of the age of precision strike, with an operational pedigree stretching back to Operation Desert Storm in 1991.

It may seem like the Tomahawk—or something like it—launched from ships would meet the intent of the 2020 strategic update to develop more offensive capability.

But there are some key reasons that suggest that a ship-launched land-attack missile may not be an adequate solution to Australia’s strike needs.