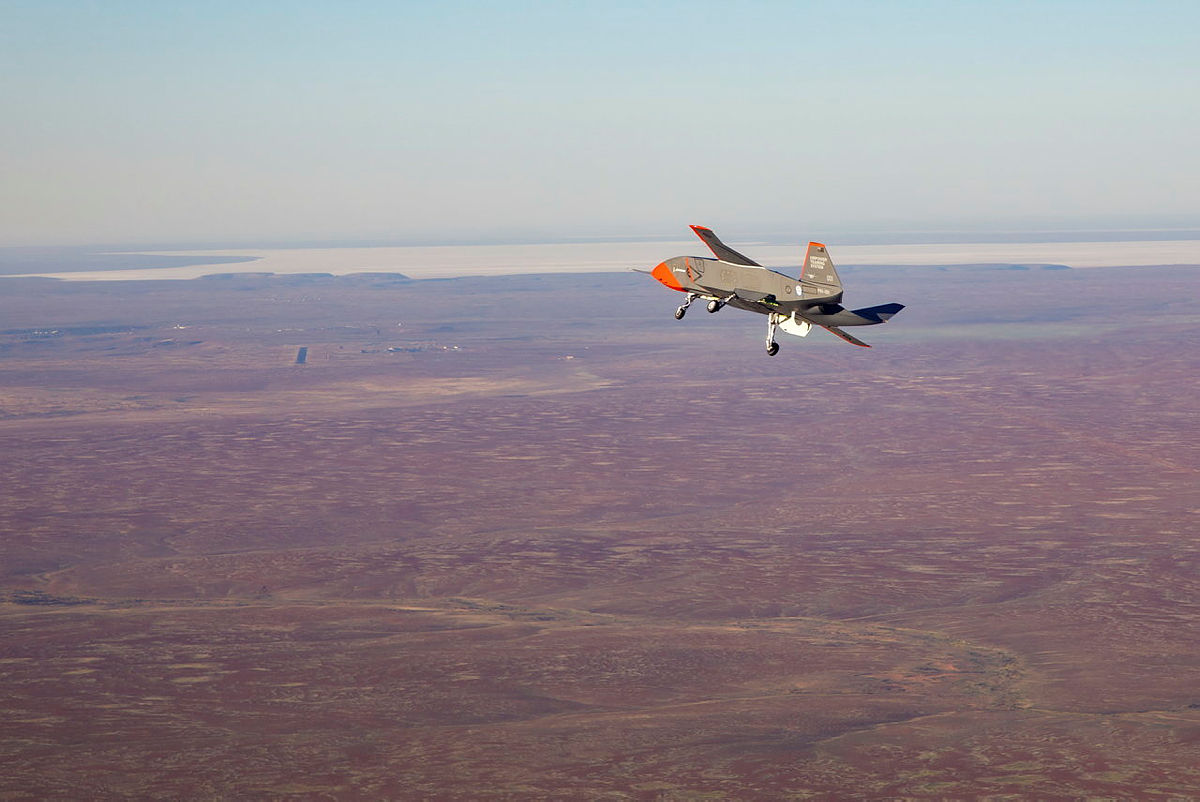 The successful first flight of Boeing Australia’s ‘loyal wingman’ uncrewed aircraft opens up a new path for the Royal Australian Air Force as it moves into its second century. The drone is part of the Airpower Teaming System linking manned and unmanned aircraft, and its rapid development from a concept through to digital design, development and testing, assembly and first flight in just three years illuminates the RAAF’s path into the future.

After the test flight, head of air force capability Air Vice Marshal Catherine Roberts declared that future airpower must be developed at a ‘speed of relevance to technological change.’

The paradigm of aircraft being fielded after a 20-year acquisition cycle and billions of dollars of investment is yesterday’s capability development model. It’s increasingly at odds with the pace of technological change and with the rapidly developing combat capabilities of potential adversaries.

If the RAAF is to reduce the risk of technological and operational surprise, its thinking about the future can no longer be based on multi-decade timelines for new capabilities.

The 2020 force structure plan suggests that studies of options to replace the F-35A will begin in the late 2030s. It would make much more sense to embrace the approach adopted for the loyal wingman project, by beginning analysis of alternatives for the F-35A replacement now, in a manner that could then align with US work on the Next-Generation Air Dominance (NGAD) system. That will be a mix of crewed and autonomous platforms, with an emphasis on rapid development through a ‘digital century series’ model.

Loyal wingman essentially embraces this model. Boeing is clearly poised to use it to compete for the US Air Force’s ‘Skyborg’ program, and it may well be exported to other markets. The approach taken with loyal wingman can be adopted for NGAD. Cooperative development by Washington and Canberra could see NGAD introduced much sooner than a traditional 20-year acquisition mindset would envisage. Speed matters.

The first flight of loyal wingman highlights a real opportunity for Australia’s defence industry. There’s debate emerging in the US over the future of the F-35, and high operating and sustainment costs could see its numbers reduced to 1,050 jets from a planned purchase of 1,763. There’s talk of undertaking a clean-sheet design for a fourth-generation-plus or fifth-generation-minus aircraft to replace the F-16 and ease reliance on the F-35 as a complete airpower solution.

Certainly, the USAF could embark on production of a new crewed aircraft, but there’s a risk that history could repeat itself with escalating operational requirements driving up cost and complexity. Australia’s loyal wingman offers a better alternative, and Boeing Australia and Defence must be ready to promote such a capability that can meet both American and Australian needs.

As ASPI’s Marcus Hellyer notes, loyal wingman could well evolve into a family of vehicles that exploit its modular design to carry different payloads, including strike munitions and intelligence, surveillance and reconnaissance capabilities. It may become a range of larger or smaller platforms with varied ranges and payloads. A larger ‘son of loyal wingman’ could, for example, have different engines that enable higher speed and greater performance. In addition to developing a cheaper alternative to crewed bombers such as the B-21 Raider, such a platform could also undertake long-range air-dominance missions.

It’s vital to combine next-generation aircraft design concepts with next-generation weapons technology. An evolved wingman could ultimately undertake both electronic warfare and attack roles and carry directed-energy and hypersonic weapons. That could drastically transform how the RAAF undertakes strike and air-combat operations. Greater range is a must, given that Australia’s location means battles would occur over vast distances.

Loyal wingman also allows the RAAF to break out of the traditional mindset for small, boutique forces and instead embrace mass. The current force structure of 33 F-35As (which will increase to 72 with an option for an additional 30), along with 24 Super Hornets (which are due to be retired in the mid-2030s), 11 Growler electronic warfare aircraft and around 30 ‘classic’ Hornets, is highly capable but brittle due to its limited numbers.

In a major conflict, aircraft are very likely to be lost and our ability to undertake operations could be short-lived. It’s better to build mass through uncrewed, autonomous systems like loyal wingman, rather than continue to rely on small, boutique forces or try to build larger forces with crewed platforms. Relying purely on a technological or qualitative edge for small forces is rapidly becoming a losing strategy in the face of China’s growing airpower capability—and quantity has a quality all of its own.

As the RAAF turns 100, loyal wingman opens up the next hundred years of Australian airpower. In March 2121 a strategic analyst, perhaps working at ASPI, looking back on the RAAF’s second century of airpower might see it as the start of a fundamental shift in how Australia thought about airpower in a dangerous period when major-power tensions were rising.

Its significance may well compare with the rapid modernisation and transformation of airpower during and after World War I.

In 2021, the beginning of the rise of autonomous systems and manned–unmanned teaming, and, most importantly, digital design and engineering for rapid acquisition are new and herald a future transformation of similar significance to that of 100 years ago.