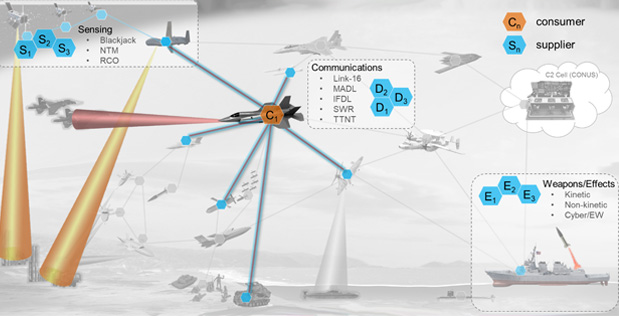 Recently, we interviewed a USAF retired Colonel who was both a combat  veteran and test pilot, Robert “Juice” Newton, with regard to the strategic shift from the land wars to military competition and engagement with peer competitors.

Juice has had extensive engagement in the Middle Eastern land wars, and is now focused on advanced technology capabilities and innovative con-ops that will assure U.S. strategic dominance.

He tells us that “when deployed I wasn’t flying fighters, but rather more holistically involved in a special ops task force. In retrospect this exposed me much more than what we’d get in the fighter wings with joint and all national power aspects of engagement.”

In his view, the role of kill web thinking is a key part of reworking how to prepare the force for new phases of combat engagement.

With regard to the kill web, the focus is upon kinetic kill with a sense of permanence about it. With regard to kill webs, one is focused on engagement density, and shaping the kinds of combat effects which enable escalation control.

His focus on density of engagement combines distributed forces and C2 at the tactical edge with the importance of strategic control which can calibrate the overall combat effects being realized by the distributed force.

Or put another way, Newton provides clear understanding that the kill web is not just a wordsmith change from kill chain.

The kill chain is focused on kinetic kill which is focused on destroying and hence eliminating an adversary’s specific capability from the battlespace. It is finite, and focused.

And of course, you will run out of the means of doing so as your missile inventory goes Winchester.

But with missiles or kinetic weapons in general being just a subset of the effectors, there must be a larger understanding of the dynamics of change.

The question of how to have the winning side of the effector competition becomes crucial to escalation management.

For Newton, the key focus of attention in dominating an adversary through distributed engagement are multiplying the effects which you can have for the time necessary to gain tactical and strategic advantage.

And by gaining a key advantage, then leveraging that advantage for escalation control and dominance.

For example, by gaining control of spectrum through distributed kill-web engagements a force may  freeze the adversary’s ability to detect and respond. In other words, that force can blind and dominate that force for critical periods of time.

Mission command guides a diversity of modular task forces which deploy into the areas of interest, and provide engagement density. Sensor networks and C2 enable the modular task force to execute its mission and to do assessments to ensure that the mission effect is being achieved.

It has to always be noted that in a very short paper, one page, the late Andrew Marshall, Director of Net Assessment introduced what he visualized as a Revolution in Military Affairs (RMA). His brilliant insight is captured by two points; information War and precision guided munitions with remote sensors.

Over time the word “information” was captured and essentially big-footed by all things “cyber.” Fortunately an appreciation is coming back on all aspects of “information” as a key valuable strategic driver with cyber subsumed as just an important and critical tool. With the issue of precision guided munitions, many often looked at the technological necessity of trusted remote sensors.

At the strategic level, rather than the experience of the land wars where central control drilled down to the battalion level and geographic control, the focus is upon understanding the interactive multi-domain combat effects. With the multiple modular task forces the kill webs may reshape the entire battlespace. The centralized command, in turn, is focused on leveraging those evolving effects to shape combat or crisis management outcomes.

While there are many discussions of artificial intelligence and its future role, clearly at this strategic C2 level this would be an area where such tools maybe helpful to understand and shape strategic results. Given high density engagement across a comprehensive kill web, AI will likely have a profound purpose if it can be trusted to augment Battle Damage Assessment (BDA). Successful AI developing  knowledge of a target killed or even temporarily neutralized, combined with any reconstitution assessments, if possible, is a battle winning competitive edge because it allows much more efficient and effectively  resourced  dynamic targeting.

If planned for and developed there is a technology based U.S. and Aalied kill web—“Information belt”  that can help combat forces fight and win in any Pacific singular engagement or most importantly, a longer campaign.

No force can ever forget the human element so with an ability to communicate directly with the modular task forces, human  “anomaly” insights and  control is always necessary to ensure that the strategic decision makers are not making judgments on the basis of false data, which is always a  major challenge associated with machine determined decision making.

In short, Newton highlighted why the kill web approach, and the shaping of density engagement is a key building block for the way ahead to fight and win with peer adversaries in the period ahead.

For a discussion of effectors at last year’s International Fighter Conference, see the following:

Many of the discussions of the conference were abstract, conceptual and futuristic but I recently went to Naval Air Station Fallon and observed a future is now event. My visit occurred as the US Navy was hosting a new exercise called Resolute Hunter which is being designed to shape a new paradigm for how 21st century ISR capabilities can be worked to provide for enhanced mission execution.

Much like how NAWDC has added two new warfighting competencies to its program, namely, dynamic targeting and MISR officers, Resolute Hunter is complementing Red Flag, but in some important ways launching a new paradigm for the ISR forces to provide a more significant and leading role for the combat forces.

With the significant upsurge in the capabilities of sensor networks, and the importance of shaping better capabilities to leverage those networks to shape an effective mission, the role of the ISR platforms and integratable forces are of greater significance going forward in force development.

Rather than being the collectors of data and providing that data to the C2 decision makers, or to specific shooters, the ISR force is becoming the fusers of information to provide for decisions distributed in the battlespace to deliver the right combat effect in a timely manner.

The featured graphic highlights DARPA’s conceptualization of a kill web.