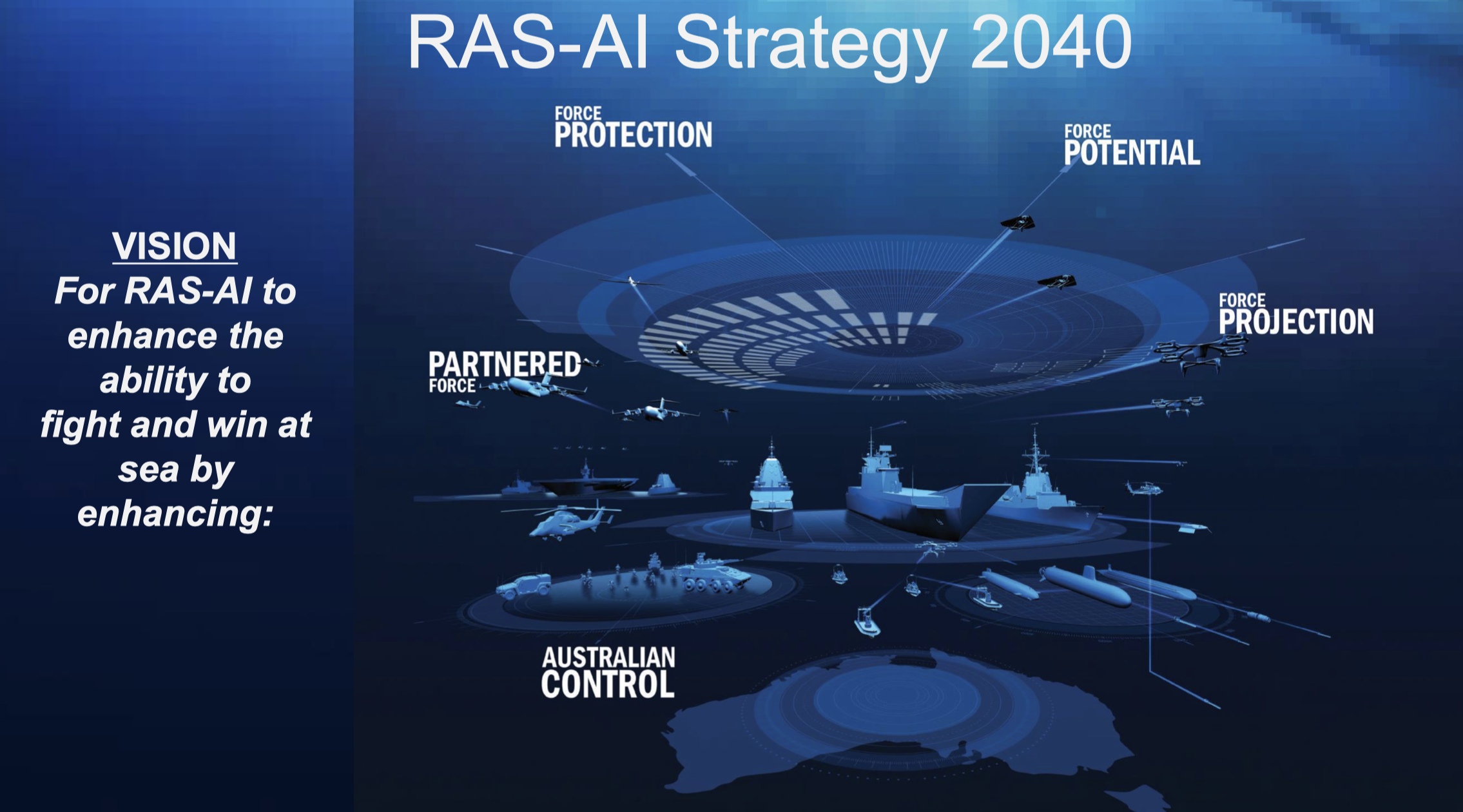 At the heart of his presentation was an opportunity to discuss the Navy’s new Remote Autonomous Systems-AI 2040 strategy.

As he put it: “Our Navy has already begun a journey to shape the maritime environment.

“To deter actions against our national interests. To respond with credible Naval power. To use robotics, autonomy, and artificial intelligence. Employing ever more reliable, robust, and repeatable systems.

“We will continue to drive our edge to help keep our people safe.

“To create mass, tempo and reach at sea and in all the lanes to enhance the joint force and strengthen our coalition with human command and trusted machine control.

“Our technologies, enabling our people to thrive.

The RAS-AI strategy is focused on enhancing the fleet, not supplanting it.

And he underscored that the Royal Australian Navy is working currently to introduce these technologies into the fleet.

I have argued elsewhere that that shift in manned platforms to relying on software upgradeability as a key driver for ongoing modernization clearly becomes a central piece in understanding how to build out RAS-AI capabilities for the maritime autonomous systems platforms or assets.

The Vice Admiral introduced a very useful term which covers the way ahead for thinking about integratability across the crewed and uncrewed assets in the force.

As he put it: “Evergreen, I think is the new term for spiral development.

“That’s the way I look at it. It’s about ensuring that we have systems that remain contemporary, and I am challenged on a daily basis about capability gaps and about deficiencies in the long lead times that require us in the shipbuilding space.

‘And are we incorporating old technologies?

“Bottom answer is no, in that we are designing future and evergreen in growth into our platforms.

“And I think that’s a very important concept that we have not always fully grasped.”

I had a chance to further discuss how to think about the way ahead for maritime autonomous systems within the fleet with Vice Admiral (Retired) Tim Barrett.

I have been in an ongoing discussion about maritime matters with Barrett ever since I first met him in 2015, and as a key architect for shaping the build out of the 21st century Royal Australian Navy,.

I wanted to focus on the interaction between the new build strategy for the Navy’s surface and subsurface platforms and the introduction of autonomous systems into the fleet.

Vice Admiral (Retired) Barrett is currently on the board of a key player in shaping a way ahead for autonomous systems, both in the civil and military sector. The CEO of that organization, Trusted Autonomous Systems Defence Cooperative Research Centre, presented at the seminar and I am focusing on his overview of the organization and his perspectives in a separate piece.

This means that Barrett brings to the discussion a deep understanding of the challenges of building out the RAN’s surface and subsurface fleet with the coming of new autonomous technologies.

The challenge of course is to shape an approach which allows for their integration and dynamic processes of change over time.

The core point which Barrett drove home in our conversation was the key challenge of building out the integrated distributed force with an open aperture to inclusion of the force enhancement capabilities which maturing autonomous systems can provide.

He argued that at TAS the focus was not just on the next big thing as how what developers can bring to the party which can enhance the capabilities of the force.

As he put it: “the new technologies need to be fitted into a broader operational environment.

“The force has to fight tonight; how can we shape ways ahead which lead to force enhancement?”

In focusing on the subsurface domain, he argued that the context for submarines was changing significantly.

They are increasingly operating in a broader kill web environment and need to be able to tap into trusted data to aid their operations and focus their efforts.

Clearly, autonomous systems can play an increasingly role in mapping and tracking the undersea domain, and the manned assets become much more capable as trusted data networks can be tapped into.

As he noted: “Submarines are part of the undersea domain battle.

“They are key contributors, but they have to work within an integrated and distributed mode, which provides them with the information and context in which they can best operate and enhance the operational outcome.”

Evolving autonomous systems will be able to provide enhanced undersea domain awareness which will then enhance the capability of the force to execute their operational plans more effectively.

But this leads as well to reinforcing the broader challenge facing the force: How do you manage and distribute the data being generated to provide information for tactical decision making at the edge and for broader tactical theater wide decision making?

And this leads Barrett to his version of Occom’s razor when assessing what a particular autonomous system might contribute to the force: “I’m less interested in what the particular device being proposed – whether it is a swarming device, an undersea array or a sea glider — but I’m more interested in how your device obtains data, and how reliable it is and how to distribute it and how relevant it is or is not to the commander fighting the battle in operational space in which he is operating.”

Notably, how do autonomous systems close gaps in the information-decision dynamic within which forces can operate as an effective kill web?

Answering this question is not a one-off platform decision; it is an evolving modernization effort in which the challenge identified by Vice Admiral Noonan needs to be met of working an evergreen force.

The featured graphic was taken from one of Vice Admiral Noonan’s presentation slides at the seminar.

The Royal Australian Navy’s RAS-AI 2040 strategy can be read below in PDF format:

Reshaping the Australian Navy Around Task Forces: The Perspective of Vice Admiral Barrett