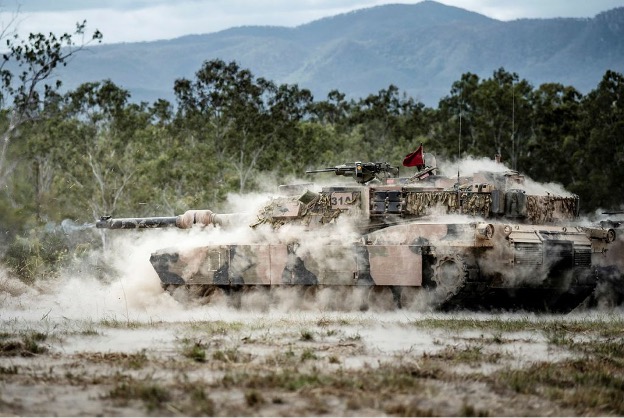 Journalist Greg Sheridan is no stranger to controversy in his writing for The Australian on foreign affairs and defence policy, but even he struck a particular chord of controversy recently when he zeroed in on the army’s acquisition of new tanks.

The tank fraternity and their supporters are not shy and are nothing if not parochial. When I dared to suggest a variation on Sheridan’s proposal on social media, tank Twitter came for me in force. I didn’t suggest not having tanks (that part of my argument seemed lost, despite all the nuance normally found on Twitter!), but in posing strategic and operational questions about the Australian Army’s role and force structure in high-end peer-competitor conflicts in the Indo-Pacific I got largely spirited tactical tank responses.

Talking tanks, then, is nothing if not controversial.

Sheridan had proposed saving the money ‘for the cost of the tanks … [to] buy another squadron or two of Super Hornets and put long-range missiles on them’.

Tank aficionados on Twitter, meanwhile, just seemed to be suggesting more tanks was the solution to strategic issues the army faced.

There are many reasons to ensure that the Australian Army has a credible combined arms force to respond to events across the spectrum of conflict, and if the last 20 years of operations has taught us anything, it’s that we should expect the unexpected at the strategic level.

But these positions miss the mark.

In the back of our minds should be the fact that in a potential high-end conflict in the Indo-Pacific, a combined arms battle group is not the solution to very many—if any—strategic problems, and its deterrent effect is limited.

The ‘real’ questions that Sheridan was trying to address in his piece are the exceptionally important ones of funding and capability.

With $270 billion extra to be spent on defence in the next 10 years, we need a much more wide-ranging debate on how that money is to be spent.

Otherwise, we risk having a defence force that is just a larger version of our current force or a more modern version of what we already have, with like-for-like replacement capabilities.

The big question we have to ask is, does the current and planned force structure best meet the strategic problems of now and into the future?

At $122 million a day for defence, debate and scrutiny are key in any strategic community and especially one that supports a liberal democracy committed to the rules-based international order and a favourable regional balance of power.

In more finite detail, Sheridan’s point was about how we should allocate funding in relation to the future role of the army, especially the risks he highlighted vis-à-vis the changing balance of power in our region, and in deterring (and potentially responding to) a much more aggressive and forthright China.

In relation to tanks, he was asking questions about the priority of the different strategic risks we are trying to manage and where best to spend Defence’s funding in relation to those risks.

In this respect, the real debate about the Australian Army in light of the 2020 defence strategic update—including the end of warning time and the emphasis on shaping, deterrence and responding to Australia’s strategic environment—is its role, as part of the joint force, in relation to the risks of potential high-end conventional conflict in the region.

The last time we were involved in such as conflict in our region, some 75 years ago, there were two major technological and operational changes in how military power was applied.

The first was the role of land-based airpower and its ability to provide sea control and long-range strike.

Second were the developments in amphibious warfare, ships, craft and operations.

Now, as we look at modern operations in exactly the same geographical environment, technology is impacting the character of war again.

Besides information warfare, cyber, artificial intelligence, robotics and automation, one of the biggest changes is the role of long-range land-based missiles and hypersonics.

These will play a major role in providing both sea and air control as part of an integrated joint force.

Given that we’re now seriously contemplating a possible conventional conflict in our region in the next 10 years, we need to consider the army’s role in operations in the archipelago that dominates our northern approaches and the wider Indo-Pacific.

The strategic debate here is not about tanks and a relatively small investment in their upgrade, but about two other key projects that will transform the army—LAND 8113 (long-range fires) and LAND 8710 (light amphibious capabilities).

As respected strategic commentator Albert Palazzo has noted, “LAND 8113 will revolutionise the Army’s way of war, as well as the land force’s place in the strategic defence of the nation; its effect on defence capability will be transformative. At the risk of sounding hyperbolic, I suggest it is not too far to say that the significance of precision Long Range Fires on the character of war will likely rank with the introduction of the airplane and the tank.”

As for LAND 8710, this is an exceptionally long overdue project that needs much greater attention and focus

If we intend on operating any of the army’s capabilities, from long-range fires to tanks, in the Indo-Pacific, then it can only be done through the use of the navy’s amphibious ships and the army’s watercraft.

This project will also be transformative for the army and is a key element of its transition to a maritime force.

As I have noted elsewhere, many of these changes run counter to the dominant alliance-based strategic culture and the major focus on a way of war that has dominated Australia’s approach to the use of land power for over 100 years.

Recognising and adapting to this challenge by evolving the nation’s strategic approach and the army’s doctrine, culture and capabilities is one of the biggest tests that Australian land power has ever faced.

The key part of this debate is not about tanks or no tanks, but about whether or not the new, transformative projects on the way for the army are being delivered quick enough and big enough for our rapidly changing strategic circumstances.

Peter J. Dean is chair of defence studies and director of the Defence and Security Institute at the University of Western Australia.