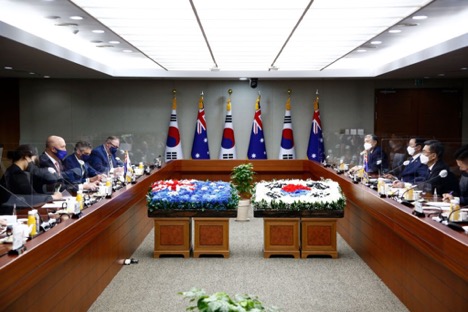 With Australia and the Republic of Korea celebrating the 60th anniversary of their diplomatic relations, this year’s 2+2 foreign and defence ministers’ meeting held recently in Seoul reflects an expanding security agenda between the two countries. Building on the 2009 joint statement and 2015 blueprint for defence and security cooperation, three features of this year’s joint statement are particularly noteworthy.

First, a combination of shared crises has increased the respective importance placed by Canberra and Seoul on the partnership. Second, the increased prominence of the United States in the bilateral relationship suggests a shifting attitude towards networked allied defence. And third, the ongoing commitment by both countries to promoting international peace and prosperity should not be overlooked.

This year’s joint statement devotes an entire opening section to the Covid-19 pandemic. Australia and the ROK have been relatively successful in protecting lives and livelihoods throughout the pandemic, albeit through radically different approaches. They will have key roles in the post-pandemic regional and global recovery efforts. Close coordination on vaccine production and distribution to Southeast Asian and Pacific neighbours as outlined in the joint statement is an excellent example of how they can accomplish more together than alone.

China also casts a long shadow over the joint statement, even though it is never explicitly mentioned. The joint statement’s focus on vaccines, supply chains, energy and trade diversification are all areas where Australia and the ROK have identified vulnerabilities to potential Chinese coercion. Today, Australia’s 2014 comprehensive strategic partnership with China and the ROK’s 2008 strategic cooperative partnership with China seem like relics of a bygone era. Diplomatic crises with China in recent years have seen public attitudes towards Beijing in both countries harden. Australia and the ROK have thus made clear their commitment to greater self-reliance and mutual support across a wide range of sectors.

This year’s statement describes the Australia–ROK relationship as underpinned by ‘shared values of freedom, democracy, universal human rights and rule of law’. Whereas past statements took their shared values and interests as given, the explicit enunciation of exactly what values the two countries share is striking, even as the ROK seeks to maintain China’s cooperation in pursuit of its North Korea engagement policy.

Climate change is another common crisis covered in the statement. While it was mentioned in the first 2+2 meeting in 2013 in the context of the ROK’s hosting of the Green Climate Fund and Global Green Growth Institute, it was omitted in 2015, reappeared in 2017 as a mention of joint support for the Paris climate agreement and disappeared again in 2019.

This likely reflects President Moon Jae-in’s ambitious green new deal and plans to transition to carbon neutrality by 2050, but it was moderated by the Morrison government’s reluctance to commit to a similar emissions reduction target. The statement’s more modest aims are for both countries to reach their ‘2030 greenhouse gas reduction and global carbon neutrality targets, and to support developing countries’ response to climate change and to conserve biodiversity’.

An important change to this year’s joint statement is the greater attention given to the US. With Foreign Minister Marise Payne and Defence Minister Peter Dutton flying on to the US for the annual AUSMIN meeting, the Australia–ROK 2+2 provided an opportunity to compare notes with another key US ally. Both countries understand that their relations with the US cannot be viewed solely in bilateral terms and that US regional strategy affects them all.

This year’s joint statement thus devotes a new section to their respective alliances with the US, while noting that ‘these relationships are part of a network of alliances and partnerships that underpin broader regional stability and prosperity’. This marks an important shift as both seek to strengthen US regional commitments following their fraught relations with Washington under Donald Trump’s administration.

The ROK also appears to finally be reciprocating some of Australia’s longstanding interest in closer military training. This includes making the United Nations Command a more prominent part of the bilateral security relationship. Bilateral exercises had been confined to the biennial Haedoli Wallaby naval exercise and limited Australian participation in ROK–US warfighting exercises on the Korean Peninsula. Building on the ROK Navy’s recent participation in the Australia–US Talisman Sabre exercise, the ROK Air Force will soon participate in the Australian-hosted Pitch Black air exercises, and ROK Army soldiers will eventually participate in combined training exercises in Australia.

This year’s joint statement also substantially expands the regional and global opportunities for closer cooperation and reflects the rising capacity and influence of both countries. It sets out a detailed and practical policy agenda for contributing to peace and prosperity in Southeast Asia and the Pacific on issues such as health, infrastructure, economic recovery, water management, disaster response and maritime capacity-building.

In a global context, their shared democratic values are much more apparent, with strong positions taken on Afghanistan, Myanmar, free trade, human rights and women’s empowerment. These are all endeavours to be applauded and show the wider promise of Australia–ROK cooperation.

Much has changed since Australia and the ROK held their first 2+2 meeting in 2013. As the ROK’s first such ministerial talks apart from those with the US at the time, the meeting was carefully scrutinised for what it meant vis-à-vis an escalating North Korean nuclear threat and US–China competition. Those challenges have only intensified in the intervening years.

Eight years and five biennial gatherings on, the 2+2 meetings have become an important anchor in the bilateral relationship, especially during periods of leadership instability in both Canberra and Seoul. As both countries head to the polls in the coming months, it remains to be seen whether high-level support for the relationship will continue, even as their respective bureaucracies push on with closer cooperation.

Peter K. Lee is a PhD scholar at the Strategic and Defence Studies Centre at the Australian National University.

This article was published by ASPI on September17, 2021.