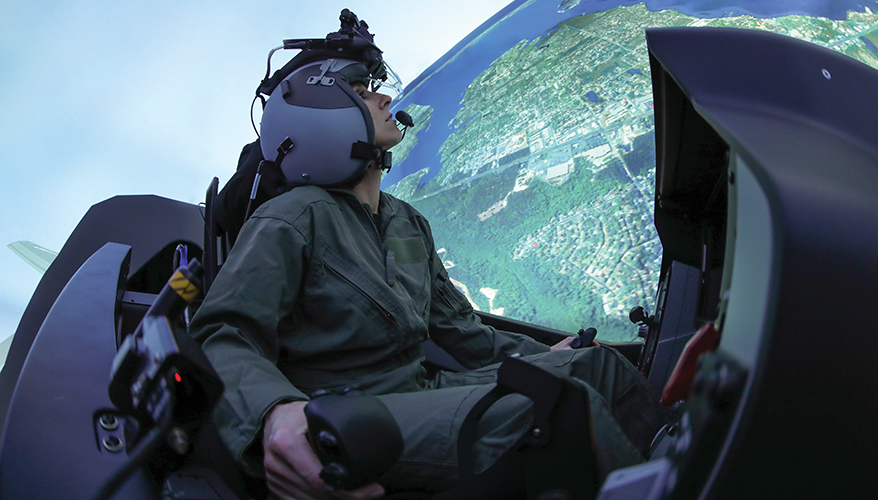 The challenge of crafting advanced training solutions is driven by several key dynamics.

The first is the nature of the peer adversary.

These adversaries are pursuing limited war on an ongoing basis to expand their influence and power in the global competition with the liberal democracies. Limited war is about learning escalation control and management and how to use both military and diplomatic tools in such an effort.

As Paul Bracken, the noted strategist has underscored: “Russia and China are trying to come in with a level of intensity in escalation which is low enough so that it doesn’t trigger a big Pearl Harbor response. And that could go on for a long time and is a very interesting future to explore.”

How to use U.S. and allied military capabilities to have the right kind of crisis management and combat effects?

In my latest interview with Paul Averna from Cubic Mission and Performance Solutions in December 2021, he highlighted the importance of training to work with allies to deliver the right kind of crisis management and combat effects.

“For effective training, we need to discover how to work our various platform capabilities to deliver decisive effects. And it’s not just the high-end kinetic end game of a conventional fight between us and a peer competitor. It is down at the lower rungs of conflict to manage escalation points. We need to be able to use asymmetric advantages to shape escalation options, and we need to train to do so.

The second is the nature of the new military platforms such as the F-35.

These platforms are part of a broader kill web and as such the challenge is to understand not simply their kinetic capabilities in a traditional stove-piped mission thread like an offensive counter air sweep but in terms of how they work to deliver integrated capabilities for a modular task force.

Averna put it this way: “The capabilities of the platforms themselves are now dramatically different from what they have been in the past and in non-traditional ways.

“For example, with regard to fighter generations of aircraft, they were characterized in terms of the performance of the aircraft platform, such as speed, turn rates and types of weapons they could carry.

“With fifth generation platforms such as the F-35 and the F-22, the measurement of capability includes data fusion and the ability to work alongside  other fifth generation aircraft in a low observable environment, meaning that those aircraft now worked very differently.

“But how to train to understand and leverage those capabilities for the low observable and wider combat force?”

For example, with the Finns selecting the F-35 and with the Danes, Norwegians, the Dutch, the Belgians, the Brits, the Poles and the Americans all operating in the arc from the High North to Poland, how can Allied partners train to get the best combat and crisis management effect from the data sharing across the F-35 force that can be leveraged for the joint and coalition force?

And Averna highlighted another training aspect which the reliance on a high-end system like the F-35 introduced as well.

“We always have had classified capabilities that we don’t discuss in public. But the impact of how we utilize those systems, the tactics, techniques, and procedures, typically are held at a secret level. We are moving now into a SAP kind of training world. Such training at a higher level of classification introduces its own challenges and limits both for the joint and coalition force.”

He underscored the importance of “being able to exchange information appropriately across our platforms, whether it’s operationally or in training. And we are having to work through the policies with regard to how we share information and what’s shareable and at what level of classification.”

The third is to train for operating in dynamic sanctuaries as peer adversaries contest the operating areas of U.S. and allied forces.

This entails a clear understanding of what our low observable platforms can provide as well as how to leverage those capabilities for the joint force operating in the contested battlespace.

The added complication of multiple F-35 partner nations exchanging data is further compounded by the need to leverage that  integration then for the joint and coalition force, which need to operate in dynamic sanctuaries against aggressive peer competitors.

Averna noted that “we are struggling right now in the 5th Gen community really to understand how those capabilities can be utilized, i.e., to be distilled into specific tactics, techniques, and procedures. And of course, they are operating in concert with multi-domain assets as well.  We really are leaving the starting gate in terms of understanding how to work better together deliver synergistic instead of sequential effects.”

The fourth is to craft ways to train against the reactive enemy who is using their evolving technologies to contest the operation of our forces and to work to deliver a decisive crisis management effect with their own goal of creating escalation dominance.

The speed by which potential peer adversaries are increasing their capacity to shape the battlespace means we are entering a continual cycle of generating new counters to emerging capabilities where we haven’t fully established the optimum tactics, techniques, and procedures (TTPs) for our operational forces with which to become proficient.

The fifth is how to fold in the dynamics of new capabilities and technologies on both the blue and red sides and to train to use those capabilities to gain the desired crisis management and combat effects.

This can only be done by creating a simulated environment that blends with live training as well. The live training piece is crucial.

“The pitch of my voice is different when I’m under stress. I may not talk cleanly, clearly, coherently, when I’ve got a pucker factor going on because I’m being targeted by something I’ve never seen before, and I feel like it’s a lethal threat to me. That is going to come across to the rest of my colleagues or participants in an LVC environment, and that will make it more authentic for them as well.”

The simulation part blended into the live training environment is key as well given the nature of the dynamic adversaries we are dealing with. The physical training ranges are too limited to encompass the kinds of new technologies and the combat situations to be anticipated in a dynamic strategic and combat environment.

Put in other words, advanced training encompasses effects-based training but in the context of preparing and engaging in limited war with blue forces operating in dynamic sanctuaries and delivering decisive effect to gain escalation control.

Averna argued: “The simulation of the threat provides an ability to deliver the effects as we would see on Night One in our cockpits, so that we can conduct realistic training. Regardless of what the effect we need to achieve, we’re trying to understand what is happening around us.

“With regard to effects-based training, we need to get to a more realistic red side environment and to do better than what we currently have in our physical ranges with our current crop of adversary platforms that we use in training. Guising participants so that they appear on Blue displays as if they were a real Red threat enables us to better assess the execution of the correct TTPs  with the quality of the training needed for our operators.”

In short, training now is not just about mastering your platform, it is learning to adapt in a rapidly evolving combat environment that inextricably intertwined with the escalation challenges of ongoing limited war with peer competitors.

My recently published book on the USMC transformation, highlights the importance of training as a key element in that transformation: