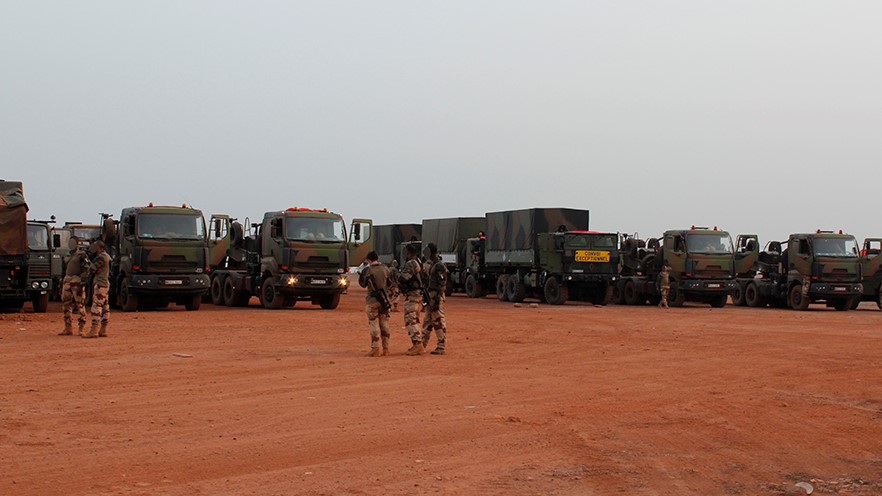 Describing how more and more African countries are shifting from decades-long Western democracies’ umbrella to both Chinese and Russian power play, he stressed that ‘’our competitors (…) seek to convert soft and hard power investments into political influence, strategic access and military advantage.’’[1]

The war in Ukraine is unfortunately the verification of such destabilization in which African countries play an indirect role, whether through the establishment of internet troll farms to influence international public opinion, their vote (or lack of it) at the United Nations about condemning Russian invasion, or the sending of soldiers – African of Africa-based Wagner group mercenaries – on the battlefield.

Indeed, in the words of Gen. Townsend, ‘’Wagner group mercenaries are offering a one stop shop for regime protection, resource exploitation and horrific violence against Africans just as we see in Ukraine today.’’

Mali is one of these African countries who have chosen that ‘’one stop shop,’’ forcing the French led effort against terrorism to recently reposition itself in the region.

On February 17th, President Macron officially announced the end of the French military presence in Mali, a decision motivated by the deterioration of Franco-Malian relations in the aftermath of the May 2021 coup d’état in Mali.

The Mali Case: Introducing Wagner in the Game

Sixty years after the first cooperation agreement was signed between Mali and the USSR in February 1961, following the Mali federation’s independence from France in June 1960[2], the Mali government has once again been seeking the help of the Russians to train and equip its forces in lieu of the French.

Not the Soviet army this time, but the infamous Russian paramilitary organization Wagner, which has already been setting foot in particular in Central African Republic over the past four years, but not only.

‘’In recent years, Wagner Group contractors have been deployed across the Middle East and Africa, including to Syria, Yemen, Libya, Sudan, Mozambique, Madagascar, Central African Republic, and Mali, focusing principally on protecting the ruling or emerging governing elites and critical infrastructures’’ stresses a recent report by the Brookings Institution[3].

In Mali, the number of Russian mercenaries is believed to have grown from about 40 in December to close to 1,000 today, taking over in particular the Timbuktu military installations recently transferred by the French military to the Malian armed forces.

As neighboring countries have watched such a pattern of military coups followed by a growing Wagner mercenaries footprint, they have become wary of a snowball effect and are determined not to follow this path. The Economic Community of West African States (ECOWAS) adopted sanctions against the Malian junta last January[4], because no satisfying calendar was set to conduct a democratic transition.

These sanctions drove the latter to hinder more and more the action of the multinational forces initially deployed to fight terrorism ever since Bamako almost felt in the hands of the jihadists in January 2013, in particular by denying flight authorizations or drone use over parts of Mali territory and of course by using disinformation.

‘’Other African countries do not like the Malian drift consisting in holding on to power. In this background and due to multiple obstructions by the Malian transitional authorities, we are bound to deplore that the political framework and necessary conditions to continue the fight against armed terrorist groups alongside the Malian armed forces, are no longer present, ’’explains General Cyril Carcy, former deputy commander of the French counter terrorism (CT) Barkhane Force, ‘’and this is the key reason, why, in concert with all its allies, France – along with its partners from the Takuba task Force – has decided to leave Mali and redeploy’’.

Created in March 2020, the Task Force Takuba has been integrated to the command of Barkhane in order to fight terrorist groups in the three borders region (Mali, Burkina Faso and Niger).

This initiative has received the support of the governments of Belgium, Czech Republic, Denmark, Estonia, the Netherlands, Norway, Portugal, Sweden, Hungary and Italy and has led to the deployment in Mali – a first – of the special forces of eleven European nations.

Such a departure from Mali should not however neither be compared to Afghanistan, nor interpreted as the end of the Barkhane CT mission.

In many ways it follows the tradition of France’s past military operations and constant redeployments which have always evolved and adapted to the threat and the political changes on the African continent.

‘’The French Chief of Staff refers to it as a repositioning of our force posture,’’confirms the general. ‘’The fight against the terrorist groups is going to be pursued at the request and with the support of the neighboring countries, in particular Niger and Burkina Faso, while our presence will be enhanced in Western African countries, i.e. Senegal, Ivory Coast, Ghana, Benin and Togo’’.

The repositioning will be co-built with local European partners. Indeed Niger, where French and US troops have already been working side by side in Niamey and Ouallam for years, will likely play an important role of the future operation.

The ‘’spirit of Takuba’’ is also there to stay, as the majority of European contributors have renewed their commitment to continue the fight, after recording its first great operational success on the ground early February with the neutralization of 40 jihadists and a huge volume of explosives.

Leaving Mali has a bitter taste for the French soldiers who fought there for years losing more than 50 brothers in arms. France did pay the blood money on the Malian soil.  EUTM, the European Training Mission, which is planning to stay in Mali, and Barkhane have all together achieved a gigantic effort in training an Army which was not only initially poorly trained and equipped, but grew from 7,000 men in 2013 to 40,000 today.

‘’Wagner is going to inherit all that…’’, notes the former Deputy Commander, stressing however that the Russians may encounter difficulties to hold such a vast territory in the long run, as it requires more manpower.

But for all that, the French authorities point out that the record of these nine years in Mali have brought a lot of successes ranging from the elimination of many terrorists and their chain of command (e.g. the recent neutralization of Al Qaeda in the Islamic Maghreb (AQIM)’s chiefs Abdelmalek Droukdal in February 2020 or Islamic State in the Greater Sahara (ISGS)’s Adnan Abou Walid al Sahraoui in August 2021) to the conduct of numerous development projects. Indeed international aid flowing in the G5-Sahel currently reaches $2 billion a year.

Illustrating the fact that counter-terrorism operations are still a major priority, on the night of February 25-26, 2022, the Barkhane force conducted a successful operation targeting an AQIM senior leader and historic player in the spread of the jihadist threat in West Africa, approximately 50 miles North of Timbuktu in Mali.

The operation led to the neutralization of the Algerian jihadist Yahia Djouadi, also known as Abu Ammar al Jazairi.

‘’Development and enhancing security via the training of armed forces remain more than ever key to contain chaos and the terrorist threat, a recipe which will be implemented in Mali’s neighboring countries. At the end of the day, you need to provide to the young population a different perspective than joining a jihadist group. Such a goal requires creating stability, allowing the return of the state and creating development projects in the areas the Barkhane force has been freeing from the jihadists. All these steps take time and need strategic patience,’’concludes General Carcy.

Horror vacui [nature abhors a vacuum], as Aristotle’s postulate goes, and Western democracies, such as the United States and European Union members, have zero intention to let authoritarian powers or regimes dictate new rules of terror on a continent torn apart in the raging ‘’battle between democracy and authoritarianism’’ described  by the AFRICOM Commander in his Congressional testimony.

The initial version of this article was published by Breaking Defense on March 26, 2022.

The featured photo was shot by Murielle Delaporte while in Mali with the French forces in 2013. The photo is of a French logistic convoy during the Serval Operation in 2013.