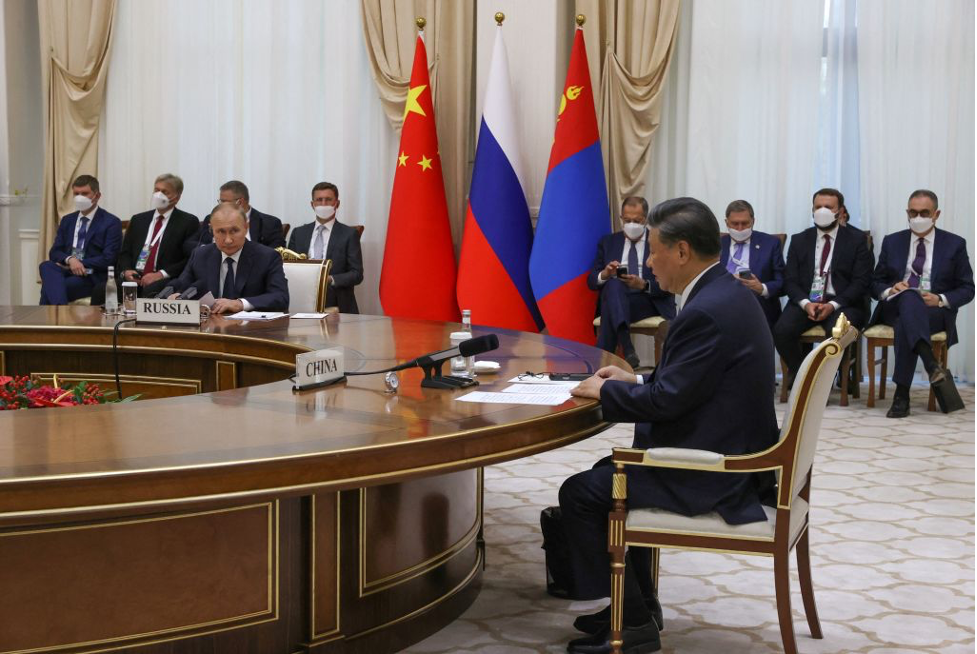 Moscow’s deepening reliance on Beijing is of long-term concern to Australia and its Indo-Pacific partners. In a sideline meeting at last week’s Shanghai Cooperation Organisation summit, Russian President Vladimir Putin seemed to cower in front of Chinese President Xi Jinping as he acknowledged China’s ‘questions and concern’ about Russia’s situation in Ukraine. But contrary to some expectations that China might see Russia as a strategic liability because of the Ukraine war, Beijing is likely to double down on the relationship in the short to medium term.

Xi has likely sensed the opportunity to use the Sino-Russian ‘no limits’ partnership to extract greater Russian resources from Putin in exchange for China’s continued backing. Apart from providing political support to Moscow, Beijing is also increasing its purchases of Russian oil and gas, shoring up some of the losses to Russia’s economy due to Western sanctions. Through a network of subsidiaries, Chinese firms are exporting dual-use items to Russia, including diesel engines for ships, microchips, radar components, and aluminium oxide for weapons development.

Despite his seemingly unimpressed face at the summit, Xi is unlikely to break ties with Putin over the lack of Russian progress in Ukraine. Russia simply remains too important a partner in China’s strategy to challenge the United States’ position in the Indo-Pacific. Such thinking was on display the next day at the SCO meeting when Beijing signed an ‘all-weather comprehensive strategic partnership’ with Belarus, Russia’s closest partner in Europe. On Monday in southeastern China, senior Russian and Chinese officials pledged to continue joint military exercises, enhance defence coordination, strengthen contact between their general staff and further explore cooperation on military technology. They also agreed to expand information-sharing in order to counter ‘foreign attempts to undermine the constitutional order of both countries’.

The emphasis on the military–technological dimension of the Sino-Russian partnership suggests that ties now go beyond the personal Xi–Putin anchor and have become institutionalised. Even though direct defence imports from Russia to China have decreased, technology transfers and joint ventures have increased, including on satellite navigation, aerospace and advanced missile defence. For instance, while Russia has become reliant on key components and investment from China’s industry for advanced weapons development, its defence industry maintains niche capacities that China needs, such as improving the combat functions of Chinese arms.

China and Russia also have shared interests in jointly developing critical and enabling technologies, which could help both sides to leapfrog a generation of weapons capabilities. This includes joint development of advanced biotechnologies, which could be used in the next generation of biological or chemical weapons. And as ASPI has reported,China and Russia cooperate on next-generation communications, including Chinese telecoms giant Huawei opening data centres in Russia. They have also increased their cooperation in space. China’s aerospace industry has exchanged radiation-resistant electronic components for Russian liquid-fuelled engine technology. China has expressedan interest in Russia’s use of artificial intelligence in Syria, including drone technology and information operations. Beijing might also seek further information and knowledge on the effectiveness of Russia’s deployment of AI capabilities in Ukraine.

It’s therefore likely that joint Russian–Chinese production of weapons will increase—with weapons being manufactured in Chinese territory and Russia contributing its expertise on developing critical parts. Earlier this year, for example, Russia and China signed a contract to jointly develop a heavy-lift helicopter under which Russian industry effectively became a subcontractor to China, enabling Beijing to leverage Moscow’s experience of mass production.

These developments will likely be supplemented by continued Sino-Russian military exercises, which provide China with the opportunity to learn from Russia’s more experienced forces. A few weeks ago, despite Russia’s depleted military, it still held live-fire anti-aircraft drills with China in the Sea of Japan. While these exercises are important politically for Putin, their continuation is also important for Xi and his goals for strengthening the People’s Liberation Army. That’s because China’s effectiveness in future conflicts—particularly those requiring high levels of joint-service action—could be hampered by a lack of overall cohesion. PLA soldiers rarely have any operational experience outside their own branch, and almost half of China’s military commanders are political appointments. Beyond learning from Russian experience, China has almost no other options for partners when it comes to practising military readiness vis-à-vis the US and its allies.

As part of their broader ‘information-sharing agreement’ to counter external interference, China will probably also press Russia to provide information on US security cooperation with Ukraine, including US training of Ukrainian troops. Such knowledge on US warfighting doctrine could inform Chinese defence planning for a Taiwan contingency, which could also involve urban warfare and the need to both gain and control territory. China would also likely appreciate Russian information on how the US and its partners are helping Ukraine adapt its older military equipment with more advanced foreign military aid—a similar situation to that which Taiwan’s armed faces would face in a conflict with the People’s Republic of China.

China is making tactical gains from Russia’s increasing reliance on it, which incrementally helps strengthen China’s position in the Indo-Pacific. Defence cooperation and information-sharing agreements with Russia are contributing to China’s overall goals of eroding US military superiority in the Indo-Pacific and exploiting vulnerabilities in relations between the US and its allies. China will likely double down on its partnership of convenience with Russia.

From Beijing’s point of view, taking as much as it can from Russia’s military industry and experience would help it meet a number of challenges, including the maturing of the AUKUS agreement and the continuing of US arms sales to Taiwan.

Sheryn Lee is a senior lecturer at the Swedish Defence University.

This article was published by ASPI on September 21, 2022.