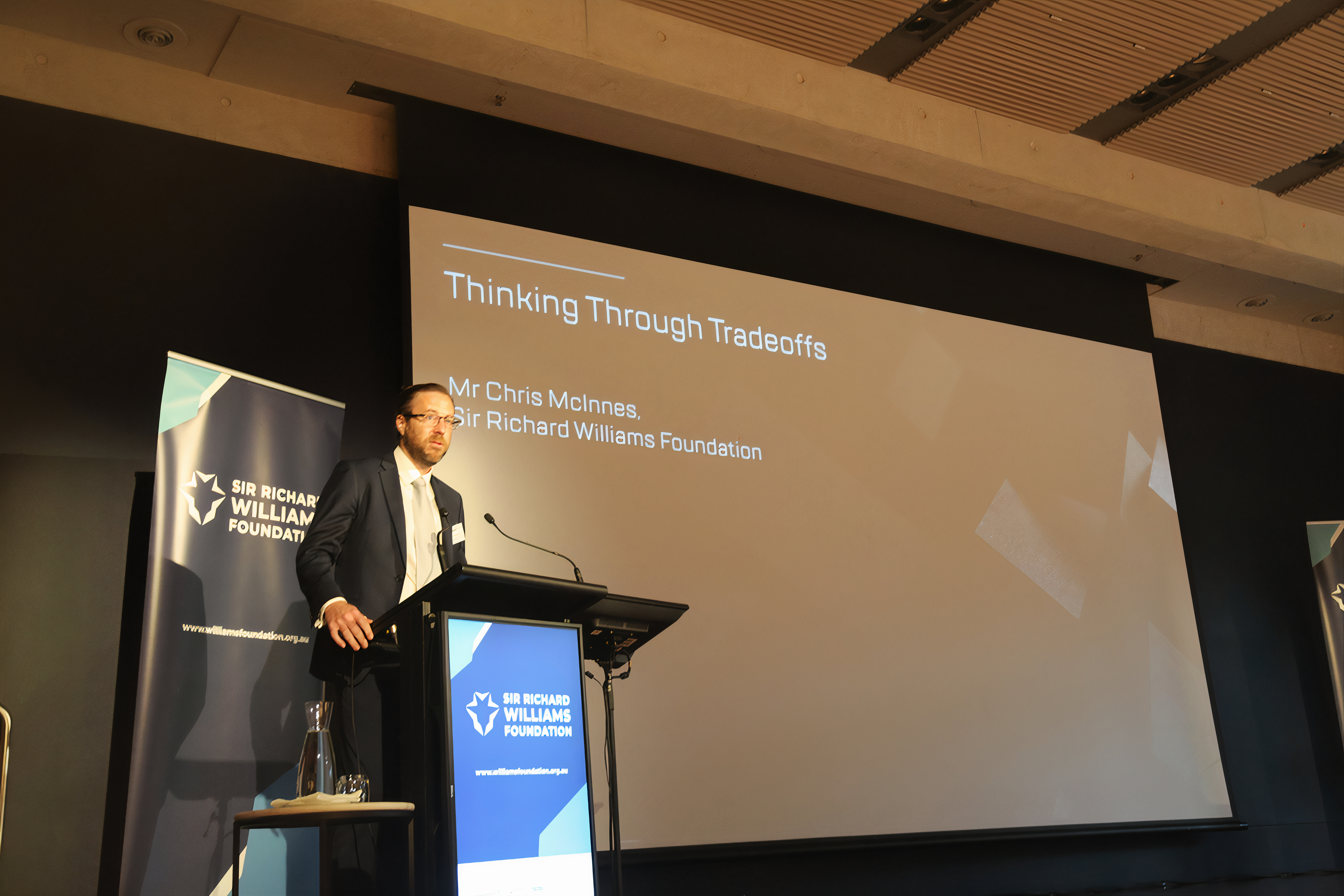 A key theme throughout many of the presentations at the Williams Foundation September 28, 2022 seminar was how to meet the challenges associated with risk management and tradeoffs in both operations of the force and in the evolving future design of the force.

And with the shift from the away game to defense of Australia itself, there are tradeoffs as well between ADF development and the role of the society and the nation in providing for defense in depth in crisis conditions.

Chris McInnes provided a way to look at the strategic context for the emergence of the ongoing tradeoff challenge with the ADF and the nation facing the direct defense of Australia set of challenges.

This is how he put that strategic context: “The ADF was for making contributions to major allies to gain influence and support in case of emergency. Utility was in showing up and upholding the ANZAC legacy, with emphasis on high-profile battle contributions. Australia’s control of its liability and benign local environment negated the need to think much about sustainability. This isn’t a criticism. This was a superb model and Australia reaped enormous rewards on investment. But it is no longer applicable and it has had some unhelpful effects on how we think about capability today.”

But the shift to what the ADF is for specifically in the direct defense of Australia changes the risk calculus and opens up significant questions with regard to what are the operational capabilities which have priority, and the role of good enough in ensuring a more robust and sustainable defence in depth strategy for Australia itself.

This is how McInnes characterized the way ahead.  “The late Brendan Sargeant identified this problem in his 2006 analysis of an Australian military document. His words remain relevant today. The complex and infinitely threatening imaginary worlds that populate so many documents mean every ‘option’ is needed and the ‘war fighter’ surely needs every drop of lethality and survivability.

“But the lack of grounding in the real world of politics and geography means there is no sense of relative priority, utility, or sustainability. These problems were tolerable when the utility of Australian defence capabilities was ‘contributing’, and high levels of discretion meant sustainability was not an issue. But that is no longer the world we live in.”

McInnes went on to argue that the mental models shaped to support the away game do not apply well to the new strategic situation.

This is how he put it:  “We face circumstances for which our mental models are not well suited. We are playing away, and we have not seen this pitcher before – our chances of getting bat on ball are not high. Our way of thinking about what Defence is for – and the relationship between utility, sustainability, and affordability – must adapt to new realities.

“These realities include a much-reduced degree of discretion in our application of Defence capabilities. There will be a much sharper priority on maximising utility in some geographical and functional areas, potentially at the expense of others. Sustainability will become a much more prominent factor. Warfighting, particularly away from home, may not be a high priority for national resources.

“Reorienting this mental model will impact how we think about what Defence does, imposing tighter real-world discipline and a focus on good enough over perfection. We must ask Tedder’s question far more frequently and probe deeper than ‘providing options’ and ‘making a contribution.’

A number of tradeoffs were discussed during the seminar.

What is the tradeoff between manned platform acquisition and autonomous systems?

How to reshape training to drive operational innovation versus new platform acquisition?

How to build sufficient supply chain depth versus other defence expenditures?

How to build up a defence force in the face of manpower challenges?

How to mobilize the society to build intellectual and manpower depth rather than simply building up the size of the ADF itself?

How to better protect Australia and at the same time expand abilities to work with allies?

At the heart of working with allies are key tradeoffs in crises whereby national survival trumps extended ally considerations. How to manage such risk calculus?

How to trade-off between active defense and passive defense?

How to trade-off in the combat space between lethal and non-lethal strike?

How to determine where to strike and with what effect?

How to understand the nature of Australia’s adversaries and to be able to get in the mind of the aggressor to know how to deter?

How to shape training regimes that can drive operational innovations that can in turn be translated into actual force structure development?

How to add civilian capabilities to the expanded defense of Australia, such as a build out of a merchant marine?

How to shape an intelligence enterprise which supports not only the ADF but enables Australian society to prevail in the information war which is part of gray zone conflict?

How to combine a porcupine strategy with ability to influence threats approaching Australia?

These were some issues introduced into the seminar; there were others.

But the broader point was well expressed by AVM Ian Duguid, Royal Air Force: “there is no silver bullet to counter all the challenges we will face.”

As Air Vice-Marshal (Retired) John Blackburn put in an interview which I did with him in 2019: “Imagine you are protecting your house. You reinforce the front door. You have a powerful rifle to deter anyone from attacking your house. Unfortunately, while you are focused on the front of your house, you have left the back door open and your adversary is already inside your house and also has control of parts of your critical infrastructure and supply chains.”

“With regard to the cyber threat, some adversaries have clearly already been inside our house. Some may now control significant parts of our gas and electrical supply chains. They may also have control over parts of our medicine supply chain.

“It does not matter how many bars you have on your windows, or how powerful your weapons are if an adversary has already out maneuvered you because of our Government’s faith in market forces to provide security for critical supply chains such as fuels.”

“In Australia, the Government relies on market forces to deliver critical supplies such as fuels.   As a result of this approach we are, in my view, in danger of losing without fighting.

“We need a policy and regulatory framework that recognizes that with 21st century authoritarian capitalist powers molding the global trade system and with the ability to direct disruptions for tactical and strategic benefit, the game has changed.

“We may be outmaneuvered before we ever get a chance to fight, because we will not be able to use those fighting elements without assured supply chains.”

His perspective infused much of the discussion at the seminar.

And the concern expressed throughout was clearly how to shape defence that could keep Australia’s supply chains open but at the same time build greater depth to protect Australia’s sovereignty by enhanced domestic supplies and capabilities as well.

The slides for McInnes’s presentation can be seen below: