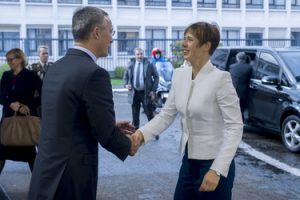 The Baltic republics are the flash point for European defense.

If there is a wider war in Europe, it is very likely that the Baltic republics are the flash point.

This perception has certainly driven changes in Nordic and North Atlantic defense.

In a recent interview, Rear Admiral Nils Wang highlighted what he thought Denmark saw as a key trigger to broader conflict.

“The Russian defense plan in the Baltic is all about telling NATO we can go into the Baltic countries if we decided to do so.

“And you will not be able to get in and get us out. That is basically the whole idea.”

It should be remembered that Finland is celebrating this year its 100th anniversary of independence, which was facilitated by the Bolshevik revolution and the dissolution of Tsarist rule and Soviets or Nazis have either dominated the Baltic republics for a very long period of time.

The period of independence has been brief; and the weight of history hangs over the region from Finland through the Baltic States.

In a report by Elizabeth Palmer of CBS News published on March 2, 2017, the concerns of the citizens of one of these Baltic states was the focus of attention, namely Estonia.

Dozens of men and women in camouflage gather in a school gymnasium, readying equipment and weapons for a hypothetical battlefield.

They may look like soldiers, but as CBS News’ Elizabeth Palmer reports, they’re actually ordinary civilians with day jobs, but they are also volunteers in the Estonian Defence League, a kind of citizen’s militia.

The President of the Republic of Estonia, Kersti Kaljulaid visits NATO and meets with NATO Secretary General Jens Stoltenberg

CBS News watched as the members trained in an annual exercise — more than 13,000 of them — a civilian resistance force ready to rise up if Estonia is attacked.

Right now, they believe their aggressive neighbor to the east — Russia — is enemy number one, especially after its invasion of Ukraine.

Why do they do it?

“Definitely because Russia has had some rather offensive rhetoric, and we just saw what happened in Ukraine, nobody thought it’s possible,” volunteer Erin Alaryklin told Palmer.

He was referring to Estonia’s aggressive neighbour to the east, Russia, which, in the past 10 years, has invaded both the Republic of Georgia and Ukraine.

Many Estonians worry their country could be next.

“So, let’s say, five years ago, nobody even thought — if you said something like that, you were the crazy person,” Alaryklin said. “Now, it’s like, it happened in Ukraine, it happened in Georgia, why not here?”

Estonia does has a professional military, too. It was on display last weekend in an Independence Day parade; a clear demonstration of the fact that this small country spends big on defense…..

Estonians over the age of 25 remember well that their country was actually ruled by Moscow during 50 years of occupation by the Soviet Union. It all ended in 1990….

Recently, the President of Estonia visited NATO headquarters and the Secretary General of NATO.

Their press conference was held on Thanksgiving Day in the United States, November 23, 2017, and reminds us that freedom can never be assumed and must be ensured by every new generation.

Not an easy task but we have to deal with the world as it is; not just the world we wish it would be.

The two leaders met to discuss NATO’s continuing adaptation to the security situation in Europe.

The Secretary General praised Estonia’s contributions to NATO missions, its leadership on defence spending, and support for NATO-EU cooperation.

The featured photo shows the President of the Republic of Estonia, Kersti Kaljulaid visits NATO and meets with NATO Secretary General Jens Stoltenberg.

This article was first published on December 4, 2017.