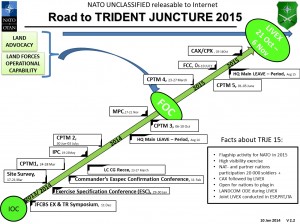 In an article we published on March 2, 2015 in preparation for the Trident Juncture exercise in 2015, we underscored NATO preparations.

Trident Juncture 2015 will be a major exercise for NATO forces, essentially leveraging their amphibious capabilities as part of a combined arms exercise.

As an article published March 2, 2015 in The Diplomat (Madrid), the role of the exercise and of Spain within that exercise was highlighted.

Our country and Portugal will be the hosts of some manoeuvres that will also have Italy’s aerial support and could gather 20,000 soldiers together.

The crisis in Ukraine is relaunching the fight between blocs that prevailed in Europe after the Second World War.

On one hand, Russia is increasing its hopes to be on a level with the URSS.

On the other hand, the NATO sees the Russian resurgence with concern.

After the last summit of Cardiff (Wales), the allies have approved a calendar of joint manoeuvres to stay in shape, standing out Trident Juncture among them.

This exercise will be celebrated in autumn 2015 in waters of the Strait of Gibraltar with Spain and Portugal as hosts and Italy’s aerial support.

It will be led by the Transformation Command and it will be an exercise of “high intensity and high visibility” that will allow the allies materializing the initiative of the so called Connected Forces into specific actions, whose objective is for the NATO troops to stay prepared to react in the case of crisis after the end of the operations in Afghanistan at the end of the year.

The exercise will put the abilities of the Nato Response Force (NRF) into practice facing 2016, when Spain will be responsible for the land component command. Besides, it could serve as the trial base for the new force of fast intervention described in the summit of Wales as Trident Juncture of the NATO, a force made up of 5,000 soldiers able to deploy in 48 hours to deal with situations of crisis in the East and the South of the Alliance.

Trident Juncture will be settled in a scene adapted to the new threats, such as cyber defence, incorporating the lessons learned in two decades of operations in Afghanistan, Kosovo and other places. The land command will be joined by aerial, sea and especial forces, as well as by intelligence, surveillance and recognition elements.

In all, more than 20,000 allied soldiers could participate, a number that can still vary depending on the contributions made by the countries, according to the Ministry of Defence. In any case, this will be the biggest exercise carried out by the NATO since the end of the Cold War.

The exercise is part of what NATO refers to as the Connected Forces Initiative.

According to an RFP released to industry for participation in the exercise, the CFI is characterized as follows:

CFI is a major part of Allied efforts to achieve NATO Forces 20201. It is an Alliance-wide programme providing a philosophy, focus and means through which to enhance and sustain NATO’s military preparedness and operational ability. On the one hand, CFI is seen as a series of interlinked activities involving education and training, including exercises; the NATO Response Force (NRF); and technology. On the other hand, it looks to inject the fundamental requirements of “communicate, practise and validate’ throughout the Alliance.

CFI provides for Allies an alternative to the operational focus of the last decade. Coherent education and training is the bedrock for the development of individuals and teams so they have the cognitive ability to understand complex situations, people and cultures, and are comfortable with ambiguity and risk. Relevant and forward-looking NATO doctrine and common procedures will enhance interoperability.

CFI seeks to connect Allied forces to enhance and sustain interoperability; to connect NATO with others to facilitate interagency actions on operations in the modern environment within a comprehensive approach2; and to connect with Partners to enable cooperative security in accordance with the Alliance’s Strategic Concept. The combination of NATO Command Structure (NCS – personnel and units on fulltime service with NATO) and NATO Force Structure (NFS – multinational units on part time service with NATO) headquarters and units will provide a framework for the deployment and incorporation of modern, targeted technology to support operations and training.

The pathway to Trident Juncture 2015 can be seen in the NATO graphic at the beginning of this article.

In short, Exercise Trident Juncture 2015 will take place from 28 September to 06 November 2015 in multiple locations across the Alliance including Italy, Portugal and Spain.  Over 25,000 troops are expected to participate in the exercise.

The purpose of TRJE15 is to train and test the NRF, a high readiness and technologically advanced force comprising of land, air, maritime and special forces units capable of being deployed quickly on operations wherever needed.

The exercise represents the final step in the certification process for the command and control elements of the NRF for 2016.  The exercise will also allow Allies and partners the occasion to train, deploy and exercise in a complex and distributed environment.

Editor’s Note:  The video above highlights preparation for the exercise as seen in a February 2015 video release from NATO.

This is a training exercise where OLRT members will spend a week immersed in the fictitious crisis scenario being used for Exercise Trident Juncture 2015 (TRJE15).