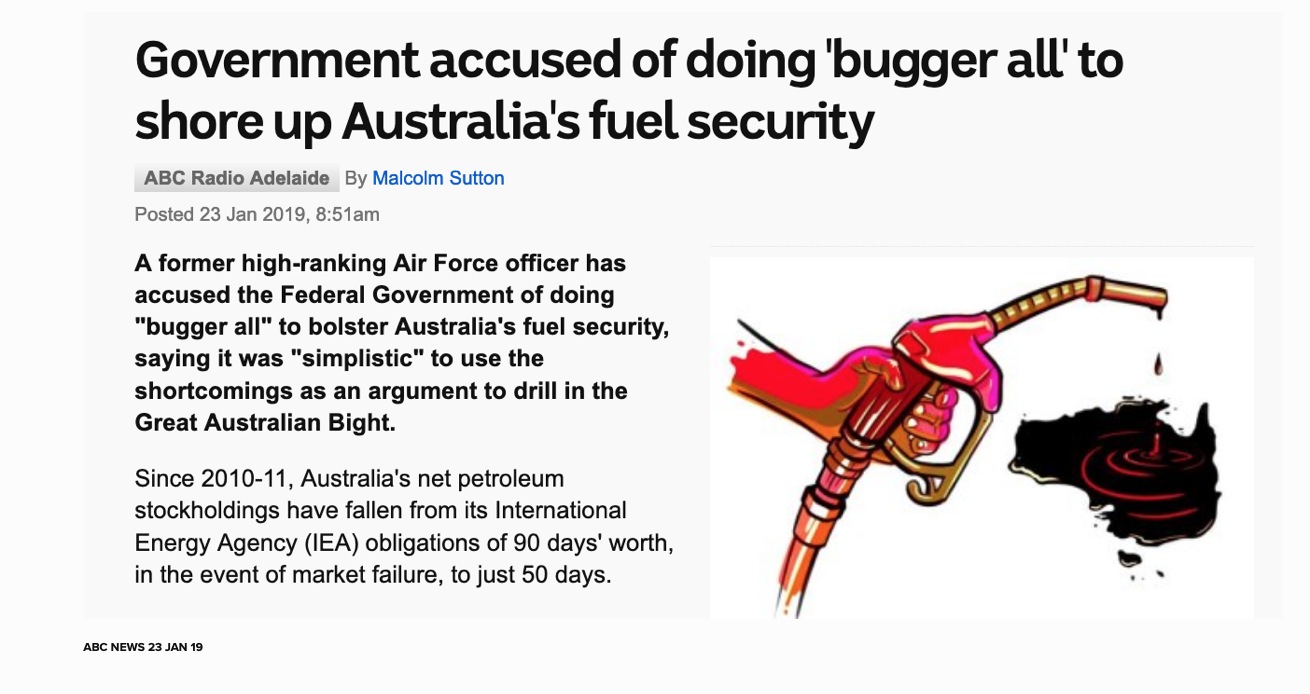 A key challenge facing the liberal democracies in defending themselves against the 21st century authoritarians is clearly ensuring that they have a robust and resilient infrastructure for defense operations.

In Europe, the infrastructure built for the Cold War has largely disappeared; the challenge facing the European Union and NATO is to reshape, rebuild and forge a 21s tcentury defense infrastructure.

This will now include clearly C2 and cyber defense as well as more traditional security of supply and transport infrastructure needs.

With regard to Australia, John Blackburn has focused for some time on what he sees as yawning gap in Australian defense, namely, reliable and robust energy security.

Recently, Blackburn establish a new website highlighting his work and on that website has a section on energy security. There, one can see his intellectual path to focusing on energy security as a key building block for 21stcentury Australian defense.

Energy security, like national security, can only be addressed with consistent bipartisan political support.

Unfortunately the topic of energy has become so politicised in Australia, both between the major parties and within the Liberal party.

As a result, the national interest has been subsumed by both party and personal interests.

This is not acceptable.

Whilst Australia is endowed with natural resources, energy security risks across several sectors have increased.

Despite this, the current Liberal Coalition Government does not seem to think we have a problem.

Unfortunately, energy security is about much more than just a more “reliable” and cheaper electricity supply.

It is about our security as a nation, it is about protecting our society and our way of life and, as such, it is a very complex issue.

I became interested in the topic of energy security when I realised that the assumptions I had made about energy and fuel supplies when I was the Deputy Chief of the RAAF were fundamentally flawed.

Accepting that one is flawed is a challenge for any fighter pilot … as I now realise, the problem of flawed assumptions is widespread in our society today.

A classic assumption related to fuel security, quoted in theAustralian Newspaper in January 2019, is stunning : “The Energy Department said Australia’s low supplies were not a serious concern as there had never been a serious interruption to Australia’s supply.”

Using that logic perhaps you should cancel your house insurance if you have never had a fire !

My own reality check came about when I teamed with Dr. Gary Waters in 2011 to research and write a report on Australia’s Cyber Security. In the process of researching that report we found that few organisations, including our own Defence Force, had conducted a cyber resilience analysis of their supply chains, it was merely assumed.

Having by then grasped the scale of our own cyber vulnerabilites, we realised that all essential supply chains were at risk.

Having identified concerns in our supply chains, I obtained sponsorship from the NRMA to conduct three studies into fuel security to determine the extent of the problem.

My studies confirmed our concerns.

In 2012, the Government issued the National Energy Security Assessment; its’ assessment of fuel security was fundamentally flawed seen clearly in follow-on government reports.

Gary and I then went on to study and write a government report on Defence Logistics in 2014.

That process did not reassure us either; we concluded that the global nature of supply chains combined with efficiency changes had led to increased systemic risk and reduced resilience in some cases.

We recommended that Defence needed to take a fresh look at Enterprise risk assessment and the changing nature of logistics support.

We still await a response …both from Defence and the Government.

The promised 2015 update to the flawed 2012 National Energy Security Assessment was not delivered.

Following the publication of the fuel security reports, a number of concerned Senators initiated a Senate Inquiry.

The 2015 Senate Inquiry report made the following recommendations:

The assessment should consider the vulnerabilities in Australia’s fuel supply to possible disruptions resulting from military actions, acts of terrorism, natural disasters, industrial accidents and financial and other structural dislocation. Any other external or domestic circumstance that could interfere with Australia’s fuel supply should also be considered.

Recommendation 2 – The committee recommends that the Australian Government require all fuel supply companies to report their fuel stocks to the Department of Industry and Science on a monthly basis.

This recommendation was eventually implemented in 2018.

Recommendation 3 – The committee recommends that the Australian Government develop and publish a comprehensive Transport Energy Plan directed to achieving a secure, affordable and sustainable transport energy supply. The plan should be developed following a public consultation process.

Where appropriate, the plan should set targets for the secure supply of Australia’s transport energy.

This recommendation has been ignored by the Government.

The promised 2015 National Energy Security Assessment… was still not delivered.

In March 2018, the Parliamentary Joint Committee on Intelligence and Security published an Advisory report on the Security of Critical Infrastructure Bill 2017.

The first recommendation of that report was: “The Committee recommends that the Department of Home Affairs, in consultation with the Department of Defence and the Department of the Environment and Energy, review and develop measures to ensure that Australia has a continuous supply of fuel to meet its national security priorities.

“As part of developed measures, the Department should consider whether critical fuel assets should be subject to the Security of Critical Infrastructure Bill 2017.

The response to that recommendation was due in December 2018….

Energy issues are so intertwined with other security developments that we cannot afford to ignore them. Solving the energy security issues of today will not be sufficient; we need to anticipate the energy systems of the future.

As we try to address the energy transition challenge, there is an opportunity to learn from others who are making some progress in systems integration.

I suggest that there may be some design thinking that we could adapt from some Defence Forces, that are in the process of transforming to an integrated design force model, and apply it to the challenge of integrated energy system design in Australia. The following is a summary of the Energy Presentation and report posted on the Reports section of this website.

Similar to what was done in Defence, 4th Generation energy systems are being acquired in component pieces, not as a part of an integrated system. This has led, as in the case of the South Australian Electricity blackouts, to systems failures. The question is, can we think about a model for a 5th Generation integrated energy system?

The problem is that together they can at times provide more energy than is required; in some cases, it is the local electricity infrastructure that cannot handle the amount of energy that can be produced. At other times, solar and wind systems cannot meet the energy demand and thus they are blamed for supply failures.

Is there a possibility of utilising the energy produced by solar and wind systems differently? There are a range of excellent academic studies that have highlighted the value of pumped hydro systems to store renewable energy. At scale, pumped hydro seems to be the only viable solution, but at considerable cost and time for implementation.

There are also examples of small scale, regionally-based renewable energy storage systems such utilising Hydrogen, which can also be used to produce a range of energy products. Hydrogen, in this case, is the medium to produce both a time and mode shift of renewable energy.

Hydrogen could be used for power generation, for fuel cells in vehicles and trains, to produce ammonia, to supplement gas supplies and to produce gas. It could also provide a significant export resource to countries such as Japan, where Hydrogen imports have been identified as a Government energy policy priority.

Whilst not the panacea for Australia’s energy needs, Hydrogen, as but one example, could be an important component of an integrated energy system, particularly as it could employ excess renewable energy capacity.

The production and transformation of energy in regional or sub-regional networks using such “energy integrators” could exploit an energy resource that is not utilised to maximum effect today.

It is about integration, resilience, economics, energy security and scalability.

It is about integrated design.