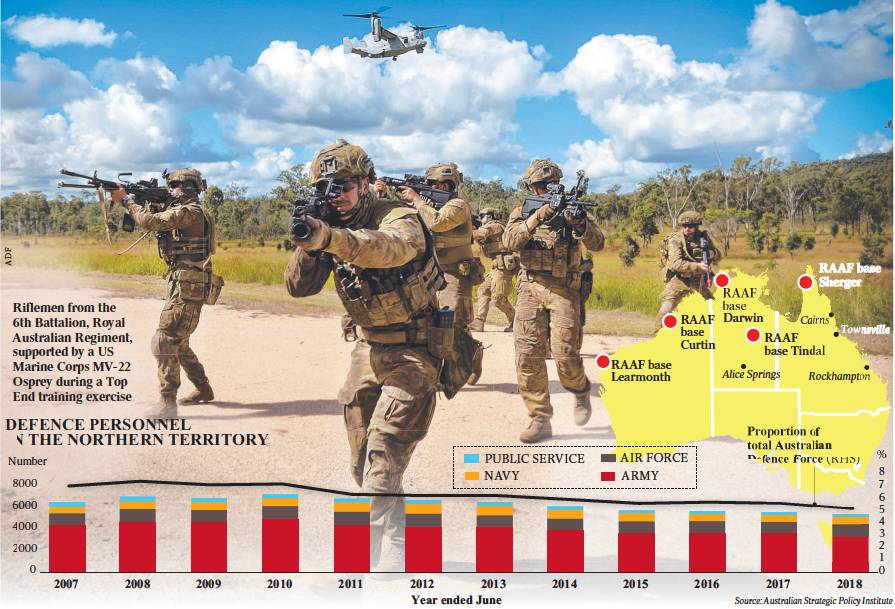 It is clear that as one addresses the challenge of the 21st century authoritarian powers, it is crucial to recover control over supply chains and the ability of those powers to use supply chain disruption as a strategic tool.

This means as well, the necessity to build more resilient infrastructure to support 21st century liberal democratic societies and to do so from a broader societal point of view as part of a enhanced all of society defense point of view.

A case in point is Australia and their Northern Territory as well as Western Australia.

There is a clear need to reinforce the capability of the ADF to operate in both the Northern Territory and in Western Australia. Notably, as shipbuilding structures are built out, there is a clear need for more energy and water infrastructure to be enhanced in these areas both for societal and defense needs.

It is not just about a narrowly understood military modernization efforts, but a broader need to have a more resilient infrastructure built in these two key regions.

The importance of the Northern Territory was highlighted in a recent article by John Coyne in the ASPI Strategist.

Last week, the Chinese government demonstrated its continued mastery of multi-layered messaging. Nary a news media outlet in the world failed to cover the show-stopping, muscle-flexing military parade held in Beijing to celebrate the 70th anniversary of the founding of the People’s Republic of China. On the day, President Xi Jinping, resplendent in a charcoal-grey Mao suit, was beamed across the globe yelling ‘Comrades work hard!’ while passing the 15,000-strong line-up of military personnel.

While this kind of nationalistic stage production may resonate with Chinese citizens, for those in the West it’s looks more like a parody of the increasingly irrelevant Cold War era. Unsurprisingly, then, the parade imagery won’t have been interpreted by many Australians as portraying Xi’s China as any sort of threat.

For national security analysts, like my ASPI colleague Malcom Davis, who are willing to look a little closer, the parade demonstrated ‘the cutting edge of the Chinese state’s military capability, with some key weapons systems on show that haven’t been seen before’. The specific capabilities unveiled at the event will keep analysts busy for many months, if not years.

These new weapons systems, along with the People’s Liberation Army’s development of airbases and other facilities in the South China Sea, serve as a strong indicator of Xi’s strategic intent. It appears rather clear that the Chinese government’s reform agenda for the PLA is increasingly focused on projecting force as far out from the mainland as possible. Many of the capabilities that were revealed suggest a clear intent to extend the range of the PLA’s anti-access/area-denial capability well beyond the first island chain. The strategic intention behind that is likely to be the progressive squeezing of a conflict-weary US out of the Indo-Pacific.

As Davis highlighted, the parade was a wake-up call that we can ill afford to ignore. Australia and its allies will need to consider how they’ll contend with these advanced military capabilities.

Australia’s ambitious defence projects, such as the F-35 joint strike fighter and the Attack-class submarine programs, illustrate that high-end defence capabilities have decades-long lead times. That time lag may explain why the US is urgently developing a strategy of dispersal for its forces in the Indo-Pacific.

Australia has become key political, economic and military terrain for both China and the US in this new era of major-power competition.

In this environment, northern Australia will become increasingly critical to Australia’s national security and defence.

As I have highlighted in the past, it’s reasonable to conclude that in a future conflict the north of Australia could well become either Defence’s forward operating base, or its stepping stone to another location in the Pacific or in the first or second island chains. Northern Australia could also be an important element in the US dispersal strategy.

Successfully deploying Australian Defence Force capabilities from bases in southern Australian takes time and is reliant on the right enabling functions being in place—or being rapidly established—in northern Australia.

The strategic importance of northern Australia to our national security has long been recognised by successive governments, but policymakers have struggled to develop a coherent long-term plan for the defence of the north. Despite the good will of the governments of Western Australian, the Northern Territory and Queensland, as well as some positive steps from Defence, more needs to be done to enhance the readiness of key enabling functions in Australia’s north.

The Australian government needs to quickly reconceptualise its thinking on northern Australia if it’s to realise the strategic opportunities that the dispersement of US forces and proximity to the region can provide.

Of course the ADF’s force posture in northern Australia needs to be concentrated in the key centres of Townsville, Cairns, Darwin and Tindal. However, the bare Royal Australian Air Force bases of Scherger, Curtin and Learmonth need to rapidly become turnkey assets. All-new facilities in northwestern Australia will also need to be considered.

This kind of ambitious thinking is not necessarily about boots on the ground but rather the creation of a single, scalable defence and national security ecosystem to support the deployment of Australian and allied advanced defence capabilities at short notice.

Northern Australia’s industry base needs to be enhanced to be able to provide a permanent and scalable civilianised replenishment and depot repair capacity for Defence capabilities deployed across the north. If the industry base isn’t improved, the ADF may not be able to optimally configure to undertake defence-of-Australia tasks or to conduct short-notice joint expeditionary operations with our allies in the region.

Xi’s military parade was as much a call for Defence to focus more on northern Australia in its planning as it was about advanced military capabilities.