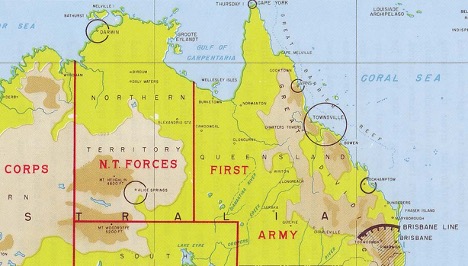 In October 1942, Edward Ward, the minister for labour and national services, accused the Australian government of having planned to abandon the country’s north in the event of a Japanese invasion. While the ‘Brisbane Line’ accusation was never substantiated, its legacy has lived on, especially in the cultural memories of the northern centres that were bombed by Japan.

In a recent Strategist article, responding to two of my pieces, Graeme Dunk breathed new life into the Brisbane Line myth. His thesis is that Australia can be best defended from the south.

While acknowledging that the north ‘obviously needs to be appropriately protected’, Dunk offers a cavalcade of reasons why the navy and army couldn’t, or rather shouldn’t, be defending our nation from the north. But in doing so, Dunk has missed the nuances in my reasoning and misunderstood my argument.

Most strategists, policymakers and governments are in fierce agreement on the strategic importance of Australia’s north, but they can’t seem to articulate a coherent long-term plan for defending it. My argument is that the current force posture in northern Australia is not fit for purpose. There’s more than a little irony that while the Australian Army continues to reduce its presence in Darwin, the US Marines increase theirs.

To clarify, I don’t contend that Defence’s move north is inevitable, but rather that it’s reasonable to think that northern Australia could be used as a forward operating base or lily pad in a future conflict.

Given the limited planning range of the Royal Australian Air Force’s new F-35 fighter jets, the lily pad option is looking pretty good. It also explains why the government continues to invest in the development of the RAAF base at Tindal in the Northern Territory.

The idea that the Attack-class submarines would travel to the South China Sea, expend their ordinance, then sail for two weeks back to Stirling in Western Australia to rearm—while under threat from anti-submarine warfare, as they’d have likely compromised their location—before sailing for another two weeks to get back into the fray clearly illustrates the tyranny of distance.

Both examples also demonstrate that at times proximity to the battlefield does matter, and extended transit times can expose the Australian Defence Force to additional risks.

To his credit, Dunk makes some valid points about the challenges of operating from Australia’s north. Forward positioning all our air and sea lift capabilities in Darwin would of course expose them to greater risk.

In contrast, finding the right capability mix for our northern force posture would have benefits. For example, it would allow the ADF, in a time when extreme weather events are occurring more frequently, to provide government with options, including the ability to rapidly respond to regional events, or perhaps to contribute a battlegroup to a regional response.

Defence needs a scalable defence industry presence in northern Australia to support its future operations in the region, whether that’s responding to a pandemic, contributing to a multinational peacekeeping operation or engaging in some form of conflict. Assumptions that industry can fill short-notice operational needs without such a presence are ill-founded. Logistics matter, and in this case so does proximity. And Dunk is right, we need to ‘acquire a level of defensive capability that we currently don’t have’ to protect these logistic functions.

He is also is right about the challenges of navigating Australia’s northern waters. And that deploying to the Pacific by sea from Darwin makes little sense. But that’s why I didn’t argue that Darwin itself would be a suitable forward operating base for all conflicts, just that it could be important.

Nonetheless, the idea that operating from Australia’s southern ports offers the ADF increased survivability doesn’t adequately acknowledge the challenges of modern warfare. And it smacks a little of the ‘it’s all too hard to operate in the north’ argument that has prevailed since Paul Dibb’s landmark 1987 defence capability review.

Neither Australia nor any of its Five Eyes partners has been able to maintain the intelligence edge that it enjoyed in the 1990s. The proliferation of low-cost space capabilities has been a great leveller in terms of intelligence, surveillance and reconnaissance.

Australia cannot assume it will have air or sea superiority in any future conflict. China has substantially increased the size, range and lethality of its blue-water fleet. It has increased the range, mobility and accuracy of its strategic strike capability. In a future conflict, our southern ports and airfields and their approaches may be as susceptible to a surprise attack as those in the north.

Dunk’s final paragraph crystalises the absolutism that underpins his position: ‘We need to ensure that we continue to realise the benefits that this geography provides, rather than sacrifice them, and potentially lots more, in an attempt to get closer to the fight.’

The way that geography is understood can indeed change with time and context. Australia has become key political, military and economic terrain in this new era of major-power competition.

Japan’s massive investment in energy resilience through the Inpex LNG plant near Darwin and Sun Cable’s proposal to build a $20 billion solar farm to supply power to Singapore illustrate this point.

I hope that Defence’s ‘re-assessment of the strategic underpinnings of the 2016 Defence White Paper’ carefully considers the strategic importance of Australia’s north and our force posture there.