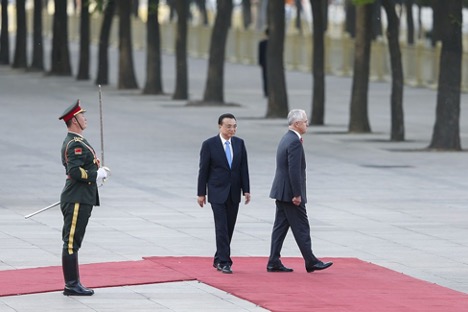 Cascading wake-up moments have shaken Australia’s view of China over the past five years.

The impact doesn’t amount to shock; this is China, after all. But it has caused shifts. And shifts have cumulative effects.

Shakes shove at policy and politicians. Moods and modes move, overturning the bureaucratic evolution of policy as predictable layering on the existing base.

Crikey moments have taken the comfort out of China policy. The incremental approach suffers gee-whizz gyrations. We’ve just had four weeks of wobbles.

Australia’s call for an international inquiry on the origins and development of the Covid-19 pandemic got a blast from Beijing. China’s ambassador to Canberra accused Australia of joining the US in ‘resorting to suspicion, recrimination or division’.

To see the five-year curve, consult Malcolm Turnbull. The China chapter of his memoir, A bigger picture, is a wake-up compilation. The former prime minister records his question to China’s Premier Li Keqiang: ‘Surely China should want to be seen as more of a cuddly panda than a scary dragon?’

On the crikey of cyber assault:

[W]hat’s become increasingly apparent over the last decade is the industrial scale, scope and effectiveness of Chinese intelligence gathering and in particular cyberespionage. They do more of it than anyone else, by far, and apply more resources to it than anyone else. They target commercial secrets, especially in technology, even where they have no connection with national security. And, finally, they’re very good at it. A last point, which speaks to the growing confidence of China, is that they’re not embarrassed by being caught.

Beijing got heartburn at Canberra’s refusal to join the Belt and Road Initiative. Australia would be happy to work on specific projects, ‘but we would not sign up to a slogan when we had no control over its content or substance’.

On the oops of espionage and foreign interference, ‘Australian governments had simply not been paying attention’, Turnbull writes.

Our espionage laws were out of date, last revised during the Cold War, and we had no legislation to regulate, let alone prohibit, foreign political donations. With so much foreign, mostly Chinese, money flowing in and around politics, we also lacked any transparency legislation.

Rendering it in Mandarin made the point even sharper, enraging Mandarin speakers from Beijing to Kevin Rudd.

Turnbull recalls the ‘slightly discordant note’ when US President Barack Obama complained in 2015 about the Port of Darwin being leased to a Chinese company. With the US rotating marines through Darwin, Turnbull concedes, ‘it wasn’t a good look’. Communications had ‘gone amiss’ and the US government first heard about the deal from the Wall Street Journal. Turnbull reruns his jest line: ‘I did offer to buy the White House a subscription to the Northern Territory News.’

The jests evaporate when he gets to ‘a far more serious snafu’ that arose over New South Wales’ effort—nearly a done deal—to sell almost all of its electricity assets to China. ‘There had clearly been a breakdown in communications within our national security agencies.’

The wake-up response was to create a centre to check on the national security risks of foreign acquisitions of critical infrastructure. The mood shift is such that during the Covid-19 crisis, the government has cut to $0 the threshold for checks by the Foreign Investment Review Board. No vital assets will be sold cheap during the pandemic. And, you could deduce, there’s no way Darwin’s port would be sold today.

In the week the Liberal Party toppled Turnbull as PM, Australia became the first nation to ban ‘high risk’ vendors (read: China’s Huawei and ZTE) from building its 5G network. Unlike 4G and 3G, he notes, 5G can’t be divided into core and non-core elements: ‘[T]he core is no more—the intelligence it used to contain will be distributed throughout the network.’

The 5G risk arrived, Turnbull writes, because of ‘ferocious competition from the Chinese vendors on price and an absence of mind’ in the Five Eyes intelligence club (the US, Australia, the UK, Canada and New Zealand).

An adversary with a permanent beachhead in an economy’s most important enabling platform technology would have the ability to make all or parts of the network—or devices and institutions within it—unavailable or unresponsive.

After intensive investigation and discussions with other Five Eyes countries, ‘the unequivocal advice was that the risks couldn’t be mitigated’. Huawei isn’t a smoking gun, Turnbull says, but a loaded gun.

The wake-up words mount: absence of mind, lack of attention, no control, snafu.

With two grandchildren of Chinese heritage, Turnbull ends by dismissing ‘the false premise that any criticism of or concern about China and its ruling Communist Party is “anti-Chinese” or racist’.

Australia has shifted because its major economic partner has form as a bully and reveals its potential as an adversary.