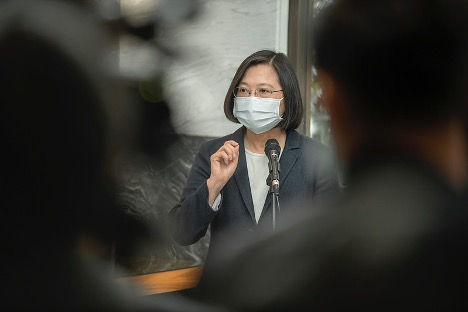 However, as Beijing has been upping the ante against Taipei, the United States has worked hard to create more space for Taiwan in world affairs.

Washington has also been marshalling its democratic partners to support Taipei.

The US’s declaration of support for Taiwan to formally play an international role couldn’t be more timely. Taipei’s successful early measures to contain the spread of Covid-19 provided a textbook example of how a government should respond to a pandemic.

As soon as the first cases emerged out of Wuhan, Taiwan implemented a coordinated response that involved effective contact tracing, a strong testing regime and accurate daily press briefings. Confirmed Covid-19 cases reached 440 on 7 May and no new cases have been recorded since then.

If one government were to be held up as a model by international organisations, the strongest contender would be Taiwan.

Despite Taipei’s success in managing the pandemic, some international organisations show discomfort at any mention of Taiwan.

In late January, the International Civil Aviation Organization began blocking Twitter accounts when analysts, journalists and US congressional staffers suggested that Taiwan become a member. The move drew public outrage, but ICAO remained defiant, saying that the blocked accounts were ‘deemed to be purposefully and publicly misrepresenting our organization’.

The US State Department later issued a stern rebuke, calling ICAO’s actions ‘outrageous, unacceptable, and not befitting of a UN organization’. It’s hard to argue with that criticism when you consider that Taiwan is excluded from ICAO despite its capital city being a major civil aviation hub.

The World Health Organization has been subject to more pointed criticism. While Taipei isn’t formally a member, the Taiwanese government still has been a source of insight into the virus and into best practices for managing and controlling the pandemic.

Yet WHO officials find it difficult to acknowledge this, and some struggle to even mention the word Taiwan.

When pressed about the WHO’s engagement with Taiwan by a Hong Kong journalist, a senior WHO official pretended not to hear the question and hung up the phone.

When the journalist called again to ask about Taiwan, the WHO official ignored the question and talked about how well China had done to contain Covid-19. The sorry display showed the world exactly why the WHO needs to start listening to Taiwanese voices.

The TAIPEI Act was enacted to assist Taiwan to more readily contribute to the international community.

A greater Taiwanese presence in international organisations is one part of that story.

Strengthening Taiwan’s partnerships with the 15 countries that currently recognise its sovereign status is another part.

The TAIPEI Act attempts to strengthen Taiwan’s diplomatic relationships with its 15 partners by doing what Washington does best: deter and coerce.

If any one of the 15 stops recognising Taipei’s sovereignty, Washington will reduce its diplomatic engagement with that country as a consequence.

Helping Taiwan strengthen relationships with its diplomatic partners couldn’t be more urgent. Since 2016, eight countries across Africa, Latin America and the Pacific islands—including Panama, El Salvador, Solomon Islands and Kiribati—have transferred diplomatic recognition from Taipei to Beijing. Economic inducements have been a primary element in Beijing’s campaign. Some are now worried that the Vatican or Tuvalu could be next to recognise Beijing.

For the TAIPEI Act to work, Washington will need to do more than foreshadowing reduced support if nations flip to recognise Beijing or pressuring international organisations into accepting Taipei’s membership. The US will need to rekindle its powers of persuasion…..

Given the unique challenge that Covid-19 poses to American leadership, the TAIPEI Act shows foresight in acknowledging that Washington alone can’t keep Taiwan afloat in the world.

The act recognises that ‘Australia, India, Japan, and other countries are of significant benefit in strengthening Taiwan’s economy and preserving its international space.’

Clearly, Washington is relying on its allies and partners to do some heavy lifting.

Australia is stepping up to the mark.

Facing threats of economic coercion from China, Australia played an important role in persuading 116 countries to co-sponsor a motion in support of an international inquiry into Covid-19 that will be put before the World Health Assembly during its meeting in Geneva on 18–19 May.

If the motion is upheld, Australia will be in a great position to build another coalition that backs Taiwan’s meaningful participation in the WHO.

Like its support for a credible international inquiry into Covid-19, Australia should advocate for Taiwan’s meaningful participation in the WHO because Taipei can offer valuable experience and expertise that will advance the international public interest. Australia won’t be the only nation supporting Taiwan for this reason.

Australia can also do more to support the objectives of the TAIPEI Act.

Australia could work collaboratively with Taiwan on Covid-19 aid projects as part of the government’s ‘Pacific step-up’.

Exchanges between Australian Defence Department officials and their counterparts in Taiwan could also be promoted through Track 2 or Track 1.5 dialogues, which is all well within the joint communiqué between Australia and the People’s Republic of China.

Australia has an interest in ensuring that the TAIPEI Act meets its objectives.

The Covid-19 crisis has shown that a world without Taiwan’s contributions is poorer and less secure.