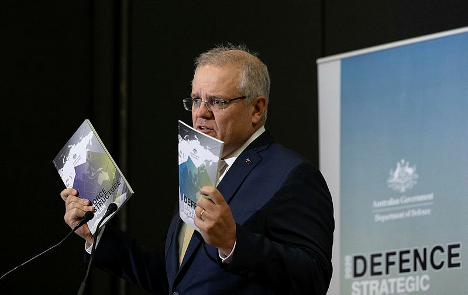 Its language and tone were blunt to a degree that would have seemed unthinkable a few years ago.

But they are of a piece with the government’s recent stands, notably during the pandemic, when it has been much more direct in what it says on matters relating to security—broadly defined—and less concerned about China’s reaction.

This includes (especially) its drive for an inquiry into the origins of Covid-19, its calling out of recent escalating cyberattacks on Australian governments, public bodies and businesses, its denunciation of disinformation campaigns by China (and Russia), and its tightening of the scrutiny of foreign investment bids.

Sometimes the government is coy about publicly naming China, as with the cyberattacks and the foreign investment changes, although no doubt has been left about the country in mind. At other times it’s more full-on.

In his speech, Morrison identified the deteriorating situation in the region and announced a ‘pivot’ in Australia’s defence posture.

This means the Australian Defence Force is to concentrate on our near region, defined as ‘the area ranging from the northeastern Indian Ocean through maritime and mainland Southeast Asia to Papua New Guinea and the Southwest Pacific’. The government doesn’t rule out excursions further afield as part of coalitions, but downplays them.

Morrison also pivoted to elevating the importance of deterrence in Australia’s military capability. Though the $270 billion ‘spend’ on hardware over a decade doesn’t actually represent a big increase from the 2016 figure of $195 billion, the significant change is that the purchase of long-range strike weaponry is committed, and, more importantly, there are moves to produce munitions and missiles in Australia instead of relying solely on distant suppliers.

While this was not a defence ‘white paper’, it’s worth comparing the thinking behind it with that in recent white papers.

Back when Kevin Rudd was PM, a major consideration underpinning the 2009 white paper was the growing power of China, and the long-term risk of a maritime strike against Australia. That paper was seen as ‘forward-leaning’.

The 2013 and 2016 white papers walked back from the 2009 thinking, although it was noted at the time that the 2016 paper presented ‘a gloomier outlook than previous editions, especially the further out the strategic timeline is projected’.

With China’s increasing assertiveness, Morrison is alert to the danger of Australia’s vulnerability in the event a miscalculation or misadventure leads to conflict between China and the United States.

The defence pivot is designed to increase the military costs for an enemy thinking of attacking Australia, and to boost the ability to strike back at a distance if such an attack occurred.

The more difficult strategic environment Australia faces has not come upon us overnight. It’s been gradually bearing down over a number of years, with China’s increasing power and the stronger note of aggressiveness in its voice and actions. At the same time, there’s been the relative decline in US power in the Asia–Pacific and, under Donald Trump, a good deal of unpredictability in its policy.

As its military and economic strength has increased, China has been active in stretching its influence widely—openly through the Belt and Road Initiative and in a more clandestine way through foreign interference operations.

Prime Minister Malcolm Turnbull introduced legislation to protect against foreign interference in late 2017, straining relations with China in the process. This followed an inquiry by former journalist and China expert John Garnaut, who worked in Turnbull’s office and then in the Department of the Prime Minister and Cabinet.

But the government was still trying to maintain a fair degree of nuance in its China policy. Events and Morrison’s style have stripped much of that away.

When Australia went out ahead of other countries demanding the Covid-19 inquiry, the old hands around Australian diplomatic circles were horrified. So were those in the business community anxious for the government to avoid upsetting China (even more).

Australia’s stand brought predictable reactions from the Chinese authorities, in both harsh rhetoric and trade retaliation.

China already had Australia ‘in the freezer’, so the Chinese reaction has been a step up, rather than something new—but it’s a big step up.

More than once in his speech, Morrison invoked the 1930s, a decade that started with the Great Depression and ended with a catastrophic world war. ‘That period of the 1930s has been something I have been revisiting on a very regular basis, and when you connect both the economic challenges and the global uncertainty, it can be very haunting’, he said.

In political and diplomatic terms, it was a risky reference, elevating the idea of a threat to a much higher level.

While the economic consequences of the declining relations with China are serious—we’ve seen action against our barley exports and statements discouraging Chinese students from coming here—Morrison knows squaring up to China would have him in tune with the Australian public.

The recently released Lowy Institute poll, taken in March, found, ‘Trust in China is at its lowest point in the [16-year] history of the poll, with 23% saying they trust China a great deal or somewhat “to act responsibly in the world’’.’

Morrison didn’t have a public profile on defence issues before becoming prime minister. But it’s known that he took a strong interest when the chief of the ADF briefed senior ministers. He was also alert on the China front as the Turnbull government became more exercised. When he was treasurer, Huawei was banned from the 5G network, and David Irvine, who has the strongest national security credentials and is a former ambassador to China, was made chair of the Foreign Investment Review Board.

They are clearly getting a sympathetic hearing from a prime minister who is injecting a new message into Australia’s foreign relations and pursuing new muscle for its defence posture.

Michelle Grattan is a professorial fellow at the University of Canberra and political correspondent of The Conversation.