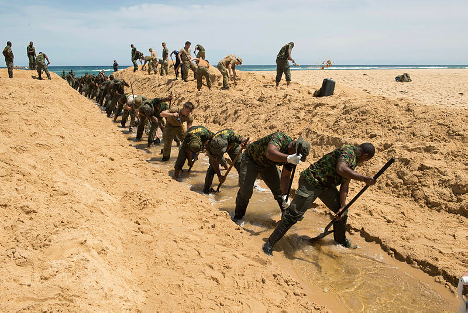 Prime Minister Scott Morrison released the 2020 defence strategic update to define Australia’s evolving challenges and provide guidance on defence policy, capability and force structure. The new strategic objectives are to ‘shape’, ‘deter’ and ‘respond’. It appears to be a straightforward direction, but what meaning do these three words convey?

Defence language can be difficult to interpret for the uninitiated. Simple terms often carry broad and complex meanings, and the true intent of a strategy may not be immediately apparent without some assistance in translation.

During a discussion on the ABC radio program PM, host Linda Mottram described the new strategy as ‘heavy on hardware, short on diplomacy’. Indeed, the prime minister’s speech—which included so much about new weapons (including long-range missiles), naval vessels, and air and space capabilities—makes that an obvious conclusion. It’s clearly deter and respond, and is certainly heavy on hardware.

But what of the concept of shape? It’s not necessarily about new weapons or use of force. In this case, the strategy is heavy on diplomacy, specifically defence diplomacy, a not well understood thread of the craft of international interaction.

During her speech to ASPI on the strategic update, Defence Minister Linda Reynolds said that she’d known defence diplomacy was important before assuming the role, but now understood ‘just how critically important our relationships are not just in our region across the Indo-Pacific but globally’. The chief of the Australian Defence Force, General Angus Campbell, agreed and noted that the strategy implied ‘engagement, partnership to build communities in our region’. So, how is this achieved?

Defence diplomacy generally happens at two levels: between individuals or small groups and through large-scale interaction during training or exercises. These activities occur not in isolation or for their own sake, but in support of whole-of-government foreign policy initiatives.

I witnessed firsthand the value of military diplomacy during my time as a student at Pakistan’s National Defence University, followed by three years as the defence adviser to Australia’s high commissioner in Islamabad. Pakistan is a complex country dominated by its military, but close relationships with Pakistani officers enabled me to assist the diplomatic mission with unique perspectives and access to key decision-makers.

Military officers are pragmatic, have shared experiences and often are prepared to communicate at a professional level when politics and international relationships are strained. I recall attending a reception in Islamabad and debating the cause of heightened tensions along the line of control in Kashmir with Pakistani and Indian officers. I discussed the merits of Chinese claims in the South China Sea with Chinese, US and Vietnamese attachés, and the complexity of the situation in Syria with Turkish and Arab counterparts. Continued communication among defence diplomats during difficult times can be invaluable.

Large-scale interaction between militaries is also a powerful tool for breaking down barriers and encouraging understanding across international boundaries and cultures. Participation in international training exercises encourages personal interaction at all levels, from the senior commanders down to the most junior sailors, soldiers and airmen. Through engagement, Australia can not only contribute to regional military capability, but also foster a deeper comprehension of Australians and our culture.

Military personnel from across our region often have limited opportunities to travel, and a visit to Australia for an exercise will leave them with so much more than new skills and procedures. When I met with young soldiers returning to Pakistan from courses and training in Australia, they spoke enthusiastically of new friends, the smell of the Australian bush, the excitement at seeing their first kangaroo and bewilderment that people eat meat pies. New insights, understanding and fond memories are powerful ways defence diplomacy shapes the region and relationships.

Ample opportunity exists in northern Australia to support military engagement with our neighbours. The top half of Australia is blessed with training ranges that are among the largest and best equipped for modern military training. As ASPI’s John Coyne suggests, there’s spare capacity to increase international utilisation of these facilities, through either joint exercises or unilateral training following a model like the Australia–Singapore Military Training Initiative.

The Northern Territory sits at the doorstep of Southeast Asia, and north Queensland with three major simulation-enabled training facilities is ideally positioned to support the government’s Pacific step-up. Each can support deployments from its near regions to offer a unique opportunity to enhance Australia’s defence diplomacy and regional cooperation.

This is one critical way the word ‘shape’ becomes more than an objective in a strategy document—it is an outcome brought to life though people-to-people defence diplomacy. The hardware is critical to the strategy, but the desire of all Australians is that it never be used in anger. We can help to ensure that if we achieve the strategic goal of mutual understanding through engagement and partnership to build communities in our region.